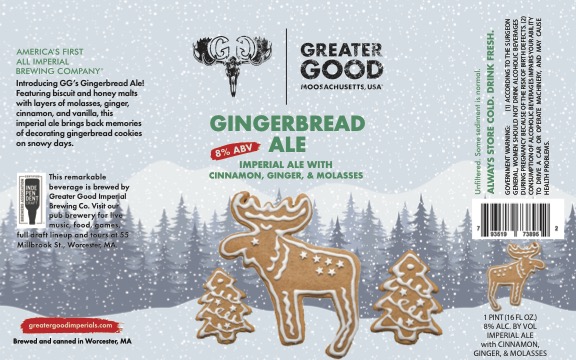 For a day where I barely moved from my chair, it seemed pretty busy around here. Momentously, because of the recent exposure to our COVID-positive granddaughter, my wife and I took a home antigen test: negative. We’ll take it again tomorrow night and head to a local hospital on Friday for a PCR test.

So far so good. Later some Brattleboro Literary Festival committee members had a Zoom holiday cocktail party, and while we were talking about all the great books we received for Christmas, out came the Gingerbread Ale from the Greater Good Imperial Brew Co. of Worcester, Massachusetts.

Imperial? A bold name for a brewery, when the term itself is a bit vague in the beer world. True, there have been Imperial Stouts since the late 18th century, a style of English stout supposedly ramped up in potency to suit the tastes of Catherine the Great of Russia.

But it wasn’t until the 21st century that breweries began adding the tag “Imperial” to any beer style to indicate an increase, even a doubling of ABV levels for that particular kind of beer. It’s not a terribly precise labeling, but it gets the notion across—if it’s Imperial, it’s going to be big and bad ass.

When microbial geneticist Paul Wengender was contemplating founding a brewery, he followed his own wont—having one big (high ABV) beer a night. But he wasn’t fond of the alcohol burn he often detected in such beers. So he tried coming up with beers loaded with flavor and alcohol without the heat that high ABV beers can bring. 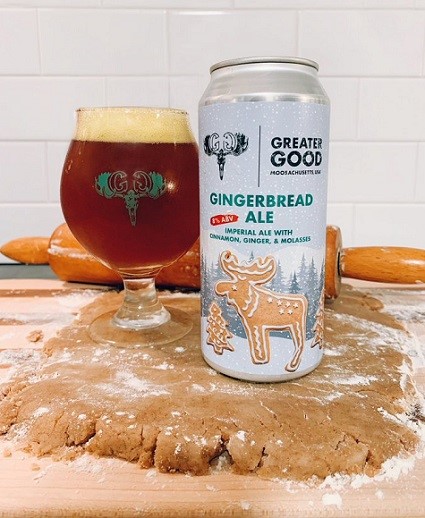 Greater Good began marketing its high ABV beers in 2016, calling itself not only Worcester’s only all-Imperial brewery, but the country’s.

Not an idle boast. There’s not a single beer listed in the brewery’s roster—and there are quite a few of them—that comes in under 8% ABV. More than a few are higher. Gingerbread Ale is at the “low” end, a mere 8%.

It’s true that’s there no sense of high ABV burn with the beer, which may be kind of a warning signal in itself. (Remember that the brewery founder might drink one of these a night.) The beer is fairly clear for an unfiltered brew, a medium brown with a light and quickly dissipating head. The ginger leaps right out of the glass, along with caramel and molassas notes. The palate follows suit, with the ginger and cinnamon jumping to the spicy fore, leaving a real finishing tingle in the mouth.

What I like most about it is the rousing ginger smack without any overweening sweetness. But I actually kind of miss the alcohol burn. It makes the beer seem to lack a little character, fading away a bit between the first taste and the finish.

Still, it rouses the curiosity, and I’ll look forward to trying more Greater Good beers. If one at a time.