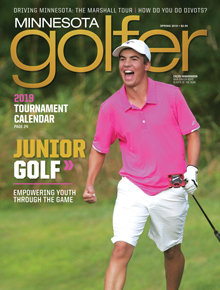 [This preview piece was written back in February for the Spring, 2019 issue of Minnesota Golfer.  It appears here in slightly different form.]

The first player to jam a tee into the Hazeltine National Golf Club turf on Thursday morning, June 20, will be one of 156 vying for the chance to hoist the two-and-a-half foot tall and roughly 25-pound KPMG Women’s PGA Championship trophy on Sunday evening.

Kerry Haigh, for one, is excited about it. The Chief Championship Officer for the PGA of America—hence the man responsible for the course setup—hasn’t lost his zest for seeing the best women players in the world plying their trade.

Haigh worked directly for the LPGA from 1985 through 1988, working about 32 events a year. “I certainly learned a lot and saw a lot in that time, and fortunately that was when Nancy Lopez was in her prime—among others, of course, but Nancy was number one then.”

Lopez burst onto the scene in 1978 and pretty much brought down the house, earning dual titles by being named the LPGA Rookie of the Year and the Player of the Year. That feat wasn’t repeated for almost 40 years, until Sung Hyun Park pulled it off in 2017. Park will arrive at Hazeltine as the defending champion of the KPMG Women’s PGA Championship. 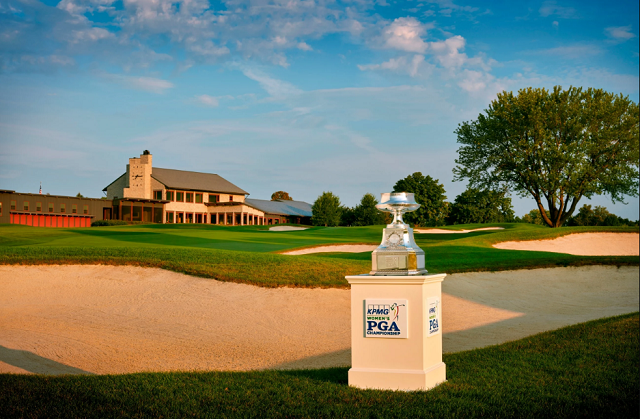 For those a little rusty on the tournament history it is, next to the U.S. Women’s Open, the second longest running of LPGA events, the first staged in 1955, also in the midwest, at the Orchard Ridge Country Club in Fort Wayne, Indiana. The format that year was an odd blend of three rounds of stroke play and a final 36-hole round of match play, but in any case Beverly Hanson outlasted Louise Suggs 4&3 to take the first title.

Then known as the LPGA Championship, the tournament became a partnership in 2015 between KPMG (one of the so-called Big Four of accounting firms), the LPGA and the PGA of America, the latter charged with managing the tournament. One goal of the merger, noted Haigh, was to elevate the event into an even better major championship than it had been previously. Purses immediately leapt to $3.5 million and climbed to $3.65 million last year. This year’s purse is up another $200,000, to $3.85 million. 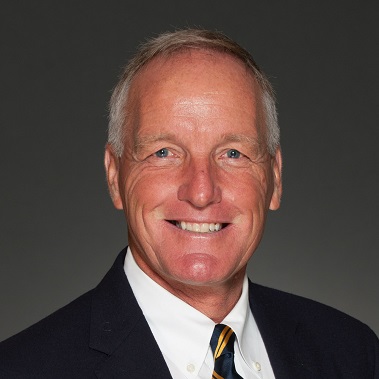 And Haigh added that, “Another part of that change was to bring the tournament to prestigious and great golf courses, and certainly Hazeltine fits into that.”

If this is the first go-round for the Women’s PGA Championship, the tournament nonetheless reassembles much of the same team that handled the 2016 Ryder Cup logistics here. Haigh and Hazeltine superintendent Chris Tritabaugh will deal with most of the action inside the ropes, while Renee DeLosh, who handled hospitality at the Ryder Cup, is now the Championship Director.

In a masterpiece of good timing, Tritabaugh was on a family vacation in Hawaii when the polar vortex descended on Minnesota in late January, but he expected no problems from the cold: “The almost 100% bentgrass we have on our short surfaces stands up really well to winter weather and we have some snow on the ground which will help insulate it from the really cold temperatures. You never know, of course; Minnesota is always a little bit of a crap shoot. But I don’t expect any impact from the weather.”

Before the Ryder Cup Haigh said to Tritabaugh, “You’re our agronomist for this event, and we’re going to trust your judgment when it comes to the course.” The partnership obviously worked well. Tritabaugh said, “Working with Kerry has been one of the highlights of my career so far. He has his hand in so much at these events it’s mind-boggling, but his ability to set up a golf course in a way that’s fair and what players can enjoy, he’s just one of the best at it.”

With the Ryder Cup still fairly prominent in their rear-view mirror, the pair haven’t really had any major adjustments to make. The two most notable will be the routing and the length of the rough. Unlike the Ryder Cup teams, the women will play the course in its normal sequence, par-72, from a maximum length of 6,807 yards. 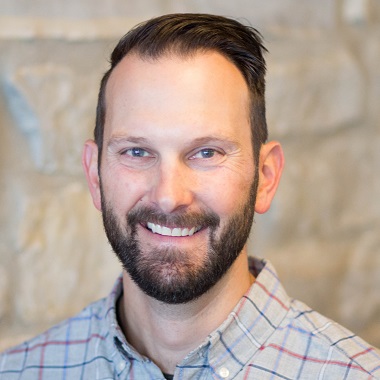 Tritabaugh said, “Kerry has set up a bit of a hybrid of our gold tees, which are our member tees, and our blue tees, which are the back tees. The number is a bit longer than what our member tees normally play, which is a testament to the women—not only how far they hit the ball but how accurate they are from back there. But from the standpoint of our membership I know they’ll be excited to watch the women playing from similar spots where they play from daily.”

The fairways will be about the same width as at the Ryder Cup. The difference will be in the rough. Haigh said, “The rough will be higher and more difficult than it was at the Ryder Cup where, at the home captain’s request, we kept it fairly low.”

Tritabaugh chuckled a bit at the memory: “The European team had some criticisms about that—of course the losing team always does. But there was a lot of intent to that, to make the course yield birdies, create excitement from the fans, get the crowd into it to make noise.

“For the women, it’s going to be tougher. We’ll do some mowing of the rough early in the week but then we’ll allow it to grow up as the weekend goes on—about the same you’d anticipate for a major championship on the men’s side.”

As of early February when we went to press, the number one ranked player was Ariya Jutanugarn of Thailand, with ten LPGA wins under her belt, including last year’s U.S. Women’s Open and the 2016 Ricoh Women’s British Open. And if Ariya should falter, there’s always her sister, Moriya to watch out for, the 2013 LPGA Rookie of the Year. 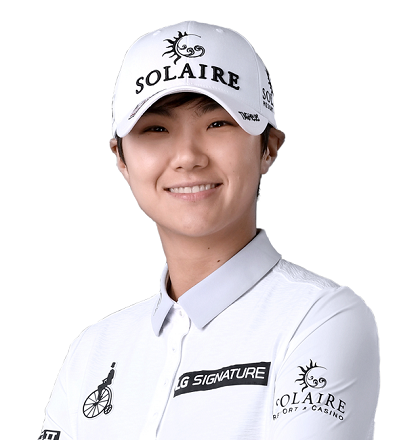 But no one would count out Sung Hyun Park’s chances of defending her PGA title. The South Korean’s amazing full season LPGA debut in 2017 included play in 23 tournaments and 23 made cuts. She had 11 top ten finishes and two wins, including the 2017 Women’s Open. She finished #1 on the money list, copped the Rookie of the Year title, and shared Player of the Year honors with So Yeon Ryu. In November of 2017 she became the number one ranked player.

Last year she actually missed a few cuts, finished a mere third in the overall money list, and ceded the number one ranking to Jutanugarn. But she won three times, including the KPMG Women’s PGA Championship at Kemper Lakes Golf Club in Illinois.

Haigh, who naturally was on hand for the three-way playoff between Park, Ryu and Nasa Hataoka, said, “Park is a wonderful player, with a beautiful golf swing. She works hard on her game and played beautifully to win last year’s event. But then I think anyone who has been to a tournament in recent years has seen how the ability and quality of play is unbelievably good and strong. It’s a great opportunity to see how the best women golfers are able to hit the ball so well and chip and putt and score so well.” 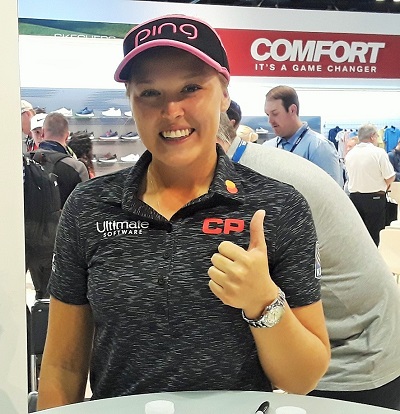 As the third South Korean to win the tournament, Park has become a hero back in her home country, along with her illustrious predecessors Se Ri Pak and Inbee Park, both three time winners, both Hall of Famers. Inbee Park won in three consecutive years, 2013-2015, and is most certainly hoping to match Mickey Wright as the only four-time winner of the title.

But the North Americans have hopes, too. Brooke Henderson, the winner in 2016 and runner-up in 2017 sounds primed and ready to go. Though from Ontario, she has yet to play in Minnesota, but she said, “I’m always trying to prepare and peak for the majors. Winning the PGA Championship in 2016 was really meaningful for me. I like the event a lot and hope this year will be another good one for me.”

Lexi Thompson, the 2014 ANA Inspiration major winner (then the Kraft Nabisco Championship), said, “There’s different prep work once you get to the golf course for a major, particularly a course you’re not playing at from year to year. There’s a lot more practice around the greens and into the greens. A lot of the girls will go ahead of time and play the course to get used to it, but sometimes when you go early it’s not in the same condition it will be at tournament time.” 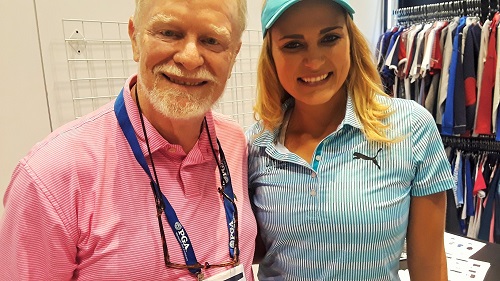 With her ready laugh Thompson added, “Usually our schedule is so crazy there’s not really much time to do that anyway. But I always say if I get there Sunday or Monday, if I can’t figure out a golf course in three or four days I shouldn’t be playing.”

Jutanugarn finished in a tie for 40th in last year’s championship, one stroke ahead of another Hall of Famer, Karrie Webb, who hasn’t missed the event since 1996. Though she’s trimmed her schedule back to eight to ten tournaments a year, the seven-time major winner (including the 2001 PGA Championship) won’t miss this one either: “We’ve always had a great turn out in Minnesota. I played in the U.S. Women’s Open in Minnesota [at Interlachen] in 2008, and I’ve watched the men play at Hazeltine. So I’m looking forward to it.”

Championship Director DeLosh said, “Minnesotans are historically crazy for golf,” and she had already compiled a waiting list of volunteers for the event. There are a lot of moving parts to putting such a tournament on—sales and marketing, ticketing, hospitality sales, operations with all the PGA vendors, tenting, security, anticipating spectator needs, parking and traffic flow, building out the site plan. But DeLosh, who by February had been on site for a little over a year (she’s lived in the Twin Cities since 2008), was unfazed: “It’s a lot to coordinate, but it’s what we do.”

With the 2015 collaboration between KPMG, the LPGA and the PGA of America, said DeLosh, “The goal each year is to grow the spectator numbers, and because Minnesota is so supportive to the tournaments that have come through town we hope to keep that trend going.”

Still, there’s no expectation that the numbers will match the Ryder Cup hysteria. The good news there, said DeLosh, “Is that weather permitting, we’ll have all the parking right on site, on the land surrounding the golf course.”

DeLosh and her team will keep on working well after that first tee is stuck in the ground to begin the tournament. She made no predictions about who might lift the trophy on Sunday, but she did say, “We’re just super excited to have the best women golfers come through Minnesota. It’s been a long time since we had them here, Hazeltine is a great host site club and I think it’s going to be a fantastic week.”