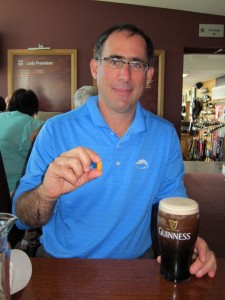 One of the designated un-drivers, Jeff partakes of two staples of any Irish golf vacation: Guinness and ibuprofen.

At first we weren’t sure whether John Farren was telling the truth or just winding us up with a bit o’ blarney. The accommodating general manager at Ballyliffin Golf Club, Farren told us over lunch that Guinness had begun brewing a reduced-alcohol version of their iconic stout.

His story had logic on its side. Legislation enacted in 2006 gave the Gardai, the police, the capacity to perform breathalyzer tests randomly at highway checkpoints. Guinness simply spotted a market segment – say, the golfer who just wanted to have a couple of post-round pints with his playing partners and still drive legally – and reacted accordingly.

It’s possible for us Yanks to idealize a brand like Guinness, of course. (I once attended a wedding in Dundalk where all the Americans drank Guinness and Smithwick, all the Irish kids preferred 16-ounce Budweisers.) Still, Guinness seems like an institution in a way that an American beer could never be.

Turns out there is “Guinness Lite,” although we never sampled it. But here’s hoping that ongoing cross-cultural exchange doesn’t further narrow the gap between Guinness and Old Milwaukee.

Meanwhile, we could undoubtedly take a lesson from the Irish playbook: It’s not that they don’t drink anymore, they just don’t drink and drive, having set up an elaborate network of alternative transportation when the need arises. Thus, the full club parking lots – “car parks,” in the local parlance – during morning hours when the Irish have abandoned the course itself to the daft tourists.