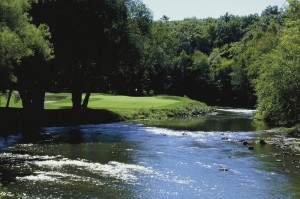 It looks pastoral, but the Sheboygan River also functions as a recurrent hazard at Blackwolf Run

David Albrecht was explaining  what makes the River Course at Blackwolf Run the toughest of The American Club’s four layouts. Meanwhile, I provided my own painfully graphic object lesson to back up his observations, all of which figure to be validated during this week’s U.S. Women’s Open in Kohler, Wisconsin.

Albrecht, a personable member of Blackwolf Run’s professional staff, cited the wiry rough – noticeably tougher, for example, than the fescue on the resort’s Straits Course; the intimidating sight lines that suggest few bailout options; the scarcity of level lies; and the severe, three-jack-inducing contours of the green complexes.

To all that, I’d add gaping bunkers, several daunting forced carries, and the Sheboygan River, a kind of serial hazard threading its way through much of the Pete Dye-designed course.

No wonder the Open layout – actually a combination of holes from the River Course and its sister track, Meadow Valleys – left several competitors waving white towels in surrender when the tournament was last staged here in 1998. The winning 72-hole total was 290, six over par. (Se Re Pak beat Jenny Chuasiriporn in a playoff that lasted 20 holes.)

Forecast temperatures call for extreme heat – as hot as 97º F — and humidity for Thursday and Friday, with a chance of thunderstorms and high winds throughout the weekend.

At least Albrecht and I got to play in delightful weather, sunny but cool. It didn’t help me much – nor did my attendance at Kohler’s joyous Festival of Beer, another attraction that brought me to the resort. Atmospherics aside, though, this is one of the most brutal golf challenges to be found on the planet.