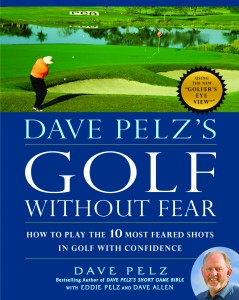 Although the development of Hogan’s short-game “system” relied heavily on trial-and-error, it was nonetheless based on his uncanny golf instincts. Not so with any examination of the short game by Dave Pelz, the latest example being Golf Without Fear, How to play the 10 most feared shots in golf with confidence. (Eddie Pelz and Dave Allen are credited as co-writers.)

As with his previous works – Dave Pelz’s Short Game Bible, Dave Pelz’s Putting Bible, and Dave Pelz’s Damage Control – the new tome is firmly based on the onetime NASA technician’s scientific method, beginning with how he identified the 10 most feared shots, that is, through two years of exhaustive surveys with students and whatever other subjects at his disposal.

Each shot is then broken down according to a half-dozen-criteria “Fear Conquering System.” These, in turn, are the shot, the problem the solution, how it should look, success examples from the pros, and conditioning program with practice methodology, drills, and so forth.

It can sound exhaustive and perhaps some of the information in the nearly 400 pages is superfluous, for example the treatise on eliminating a preexisting fear, which made me chuckle.

That said, Pelz’s textual explanations are characteristically lucid, even if they sometimes betray a need for considerable reflex skills. The photography, often using Pelz himself as the subject, is also excellent in its illustrative simplicity, if that’s the word. Actually, the sequential, stop-action shots are precisely rendered and simple in concept only.

Along with Leonard Kamsler, golf-instruction photographer extraordinaire, Pelz also helped develop the Golfer’s-Eye View technique, which shows readers what the golfer would actually be observing on the course: stance, lie, grip, etc. and their relationship to the target line.

It’s a useful technique. And if Golf Without Fear seems more comprehensive than you’d prefer, remember that you can only have one scary shot at a time. Due to be released November 11th, $40, Gotham Books, www.PelzGolf.com.