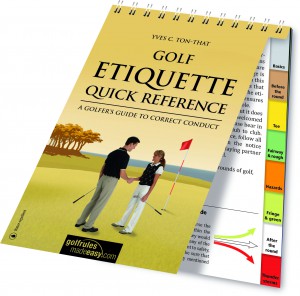 The first thing that occurred to this reporter during a perusal of Golf Etiquette Quick Reference was: good timing. Subtitled “A Golfer’s Guide to Correct Conduct,” it may well function as slightly barbed Christmas stocking stuffers for more than a couple of my golf buddies.

That’s because the author, Yves C. Ton-That, goes well beyond the nuts and bolts of golf etiquette – tending the flag, marking your ball, etc. – to identify a number of peccadilloes that, while annoying, aren’t technically infractions. For example, under the subhead Self-control and restraint:

“…exercise restraint as far as the shots of your fellow-players are concerned. Poor shots do not need commenting on – saying nothing is enough. Good shots should only be praised if the ball lands in the right place, not if it just looks good in the air.”

Words to live by. Of course, experienced golfers will find some of the material humorous. From the same sub-section:

“Strong outbursts of emotion (swearing, throwing and breaking clubs or ramming them into the ground) are absolutely taboo in golf.”

Indeed, Ton-That, who previously authored a similar treatment on golf rules – much of which is reprised here — expands on the subject of etiquette with such useful but tangential information as thunderstorm safety and first aid, equipment, dress codes, and so forth.

Thus, with the exception of a few quibbles, my problem isn’t with what appears in Golf Etiquette Quick Reference; but at a time when few issues in golf are considered outside of their effects on participation levels, the guide’s very comprehensiveness might be intimidating to the novice golfer, confirming his or her apprehension that golf is a stuffy endeavor.

The back flap of the spiral bound guide – it’s the same dimensions as a yardage book – concisely summarizes “10 golden rules for fast play.” (“Be Ready, Take your equipment with you, and Limit practice swings” are the top three.) It’s this positive spin – an easily digested, common sense approach to making a great game even greater – that might be more appealing to newcomers.

Obviously, the list’s appearance on the back cover is part of the quick reference concept, but you could make the case that it ought to be the first thing readers see. Universal observance of the 10 golden rules alone would constitute a vast improvement in the game; most of the rest of it is like the finer points of etiquette.

In a passage from a release that accompanied the review copy but wasn’t repeated in the guide, Ton-That says: “When you’re in the company of seasoned golfers, or invited to play a private club, saying or doing even one thing incorrectly can make the difference of not being invited back. And with a little preparation and knowledge, you can avoid most any potentially embarrassing situation.”

Trouble is, I wonder if some prospective recruits may not just avoid any such a potential embarrassment altogether. Thanks anyway, seasoned golfers.

I confess to occasionally being awed and even intimidated during visits to some of the game’s most imposing and austere venues. Dread of improper conduct never kept me from showing up, however. Once I did, I felt welcome at 99 percent of them, and my return-invitation percentage is right up there.

As Phil Jackson once told his Chicago Bulls, “Fear of the thing is worse than the thing itself.” Ton-That plainly has a passion for the subject of etiquette, not to mention a thorough understanding. The question is, how do we make it cool?

Let’s see if my regular playing partners do their homework.