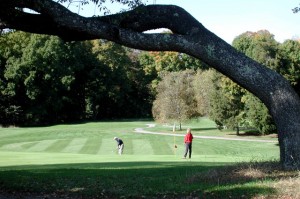 Golfing at the Shawnee Resort

One of the most storied resorts in eastern Pennsylvania is celebrating its 100th anniversary in 2011.

The Shawnee Inn and Golf Resort, located in the small town of Shawnee on Delaware, has been around a long time indeed, and has a history that would fill a good sized book. The resort boasts one of the only two championship golf courses designed by legendary golf architect A.W. Tillinghast that are open to the public, with Shawnee being his first design ever. A total of 24 of the Resort’s 27 holes on the course are located on a private island in the middle of the Delaware River.

Jeremy Wo, public relations coordinator for the Resort, talked to me about the long tenure of Shawnee.

“A major element that has helped Shawnee endure over the years was the ingenuity of our proprietor and proceeding owners. C.C. Worthington, a prominent engineer, had the foresight of building the Inn with 12-inch thick concrete. Many other establishments built in the early 1900’s were destroyed by fires and decay. Because of our unique European design we were able to endure.”

He added, “Additionally, Mr. Worthington fostered golf and it is rumored that the seeds that would eventually grow into the PGA were planted on the fairways and greens of The Shawnee Inn and Golf Resort. With owner Fred Waring came show business. Fred understood that the travel world was changing. International travel was becoming more accessible to the average person. This was the age of the tropical vacation rush. Fred was able to sustain Shawnee by creating a Mecca of stardom. Everyone from President Eisenhower to Jacky Gleason vacationed at Shawnee and the world knew it.”

The Inn and Shawnee Resort’s golf course opened in 1911. As Wo said, many of the greats of golf during the first half of the 20th century played at Shawnee, including Walter Hagan, Lawson Little, Johnny Farrell and later Arnold Palmer. Television stars Jackie Gleason, Lucille Ball, Perry Como and Ed Sullivan made the resort, nicknamed “The Gem of the Northeast,” a regular stop.

C.C. Worthington was one of the first real drivers of big time golf in the country. In 1911 he staged a professional tournament, then somewhat uncommon, to raise awareness of the game and the talents of the men who played for pay. The pinnacle of Shawnee’s role in the development of modern professional golf was when the PGA held its Championship there in 1938, with the event being won by Paul Runyon in a dramatic finish over Sam Snead.

Wo spoke to the loyalty many of Shawnee’s visitors have shown over the years.

“It says a lot that we have guests who have been visiting us for decades.  In some instances, families have passed their tradition of visiting Shawnee onto second and third generations of travelers. It also helps that we have a superb course located in the middle of the Delaware River. We are located within two hours of New York City, Philadelphia and Northern New Jersey, which makes our resort extremely convenient to visit.”

The present fine conditions of the Inn and golf course were not always so. The years had taken a bit of a toll on the venerable resort.

“When Charlie Kirkwood purchased Shawnee the resort was in a state of disrepair,” said Wo. “Mr. Kirkwood reinvested in Shawnee’s strong golf tradition and slowly rebuilt our reputation as a premier destination. What resulted is the Shawnee everyone has fell in love with today. Our golf has never been better and our accommodations are truly exquisite. The past decade has been coined as Shawnee’s renaissance. So much positive change has occurred and with it a new philosophy has emerged that meshes Shawnee’s rich golf heritage and pristine natural environment.”

There are three restaurants located on the property, the very golf chic Sam Snead’s Tavern, as well as the River Room and The Bistro, which range from fine dining to casual fare. A new spa soothes the body after a long and active day.

The owners are constantly upgrading the facility and have added such touches as a brick walkway, an upgrade to the Resort’s recreation center, and new fairway yardage markers as well as curbing and landscaping on the golf course. A neat little sidelight is the Shawnee Gallery, which offers artwork and craft furniture for sale as well as workshops for guests and visitors.

Shawnee’s golf course demands thoughtful tee shots and approaches to the small, tricky greens. Depending upon which configuration of 18 holes is played, the course measures from around 6,500 yards to slightly over 6,700 yards.

The Red Course concludes with a difficult 457-yard par-four, the longest par-four among the 27 holes at the resort. The Blue Course ends with a great par-three, a 230-yarder, and the White Course is a fun mix that has an equal number of threes, fours and fives.

One of the most unique features of the course is that two par-threes, the Red Course’s second hole and the seventh on the Blue Course, play over the Delaware River. The holes, which measure 165 and 180 yards respectively, demand a full carry over water of about 100 yards.

The course is challenging and fun. It isn’t long for modern standards, but the greens have a lot of slope on them and present a test.

Shawnee also offers a very good practice facility with target greens designed by noted architect Tom Doak. In the evening, the practice facility and part of the driving range are turned into a lighted par-three short course with holes ranging from 45 to 138 yards in length.

Information may be accessed at www.shawneeinn.com.