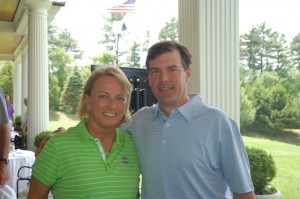 Head professional, media personality and all-around good guy, Brian Crowell, and the owners and staff at Glen Arbor Golf Club in Bedford Hills, N.Y. sure know how throw a party.

Crowell heads up the annual Traditions of Golf Invitational at Glen Arbor, located only a few well struck drives from the town’s center in the New York City bedroom community. Each year the event honors a person who has made outstanding contributions to the game, and the bestowing of the accolade serves as the focal point to a day of camaraderie among writers and others in the metropolitan area golf industry. The first Traditions was held in 2009 and Gary Player was the honoree. It was fitting, because the nine-time Major champion and worldwide ambassador for golf designed Glen Arbor, which opened in 2001. Others honored have been Dennis Watson, a trick shot artist and motivational speaker who is handicapped, longtime New York Times sports columnist Dave Anderson, Jay Mottola, executive director of the Metropolitan Golf Association, and broadcaster Jimmy Roberts.

Pepper was a deserving honoree, having won 17 LPGA Tour events and two Major titles. She also compiled a 13-5-2 record in the Solheim Cup and was an assistant captain for the 2013 U.S. team. But Pepper’s contributions to the game have gone beyond playing it well and delighting fans with her fighting spirit. She is an award-winning broadcaster and has authored several children’s books, in addition to supporting numerous  charities and being named as an Independent Director for the PGA of America.

Pepper, obviously touched by the award, was presented by Major Dan Rooney, albeit via a pre-taped video, and again it was a nice moment. Rooney is the founder of the Folds of Honor Foundation and Patriot Golf Day, charities that have assisted the families of those in the military who have been wounded or lost. Talking about using golf for a worthwhile cause! Rooney, a fighter pilot, is also a golf course owner and a PGA professional.

After the lunch and ceremony, held on the patio of the spacious clubhouse at Glen Arbor, which overlooks the 18th hole, we headed out to test the layout, which was in superb condition on this day. Unlike previous Traditions of Golf events, the rain held off and we got to complete 18 holes.

Player, who finished the course in 2001, used the  natural terrain to create a number of elevated tee boxes and green complexes. An important factor of a sound routing, there is nary a hole reminiscent of another on the course, with a pleasing mix of shortish and long par-fours, reachable-in-two par-fives and visually appealing but tricky par-threes.

The first hole plays longer than its yardage, 538 from the tips. It commences from an elevated tee to a valley below. Then you climb dramatically uphill. I hit two good shots and then struck a gap wedge from her edge of the rough (it’s deep and lush at Glen Arbor) onto the green and two putted for a par.

The second is a good, 389-yard par-four. The hole again starts from an elevated tee and bends to the left at about 230 yards, with a bunker grabbing too long a tee ball. It is imperative to hug the left side with your drive in order to leave a short iron into a green that sits somewhat below the fairway. Again, I stuck a solid tee shot, hit a nine-iron to about 30 feet and made the curving putt for my first of two birdies on the day.

My second birdie of the day came at the 11th, a 197-yard par-three that is framed by tall trees, maples, oaks and pines, to its rear. I’d like to say I played it this way, but I hit a six-iron onto the left side of the green, the ball catching a ridge and rolling down to the right within two feet of the cup. Can’t miss that length putt, or at least you’d better not.

The 14th is one of several sweet short holes on the course. It plays 162 yards with the tee shot needing to clear a pond. It’s really only a short iron but the green is somewhat hidden by a bunker and the flag was tucked on the left side near the water. I missed left with an eighth-iron, took a drop and made a very satisfying bogey after a decent chip and 10-foot putt. Goes to show you how a seemingly mild par-three can turn nasty in a hurry if you get too greedy and miss the green on the wrong side.

I thought the best par-four on the course to be the 359-yard 16th. The tee shot must be struck accurately to avoid water and bunkers on the left of the fairway landing area. Then it’s an approach across water to a rather large green. I made a solid four on this one and it was a good feeling.

The course ends in dramatic fashion with a 414-yard par-four that Player again made wise use of the topography to design. It begins again from an dramatically elevated tee, plays to a valley with water on the right, and then back uphill to a green that is hidden from the fairway, which makes the approach shot somewhat of a guess. I caught a bad lie in the rough after a long drive, chunked the ball up the fairway, got on in three and two putted for a desultory finish to a fun round.

Glen Arbor plays only a little almost 7,000 yards from the tips. But there is invisible yardage, as many of the greens are elevated, there are a number of doglegs, the rough is nasty, and the greens are–befitting a private club where the members can move their ball–undulating and kept on the rather fast side. If you play it smart off the tee, don’t get too greedy, and strike your driver and irons with precision you can score well here. But the course can also bite you in the backside (no pun intended), as it did when both me and my playing partner made triples and doubles on the same holes, ruining our chances of a top 10 finish in the bragging rights tournament.

Glen Arbor also has an expansive practice facility as well as a state-of-the-art leaning center, where Crowell and his assistant professionals ply their trade and the members hone their games. One of the most impressive aspects of the practice facility is a short game area known as the Gary Payer Center that enables members and guests to work on variety of shots from multiple teeing areas. The five regulation-sized greens were designed to be used as targets from the teeing grounds only and replicate actual conditions found on a golf course, such as shots to flags over bunkers and pitches to rose, rolling greens. There’s also an area where golfers can practice a 50- to 80-yard sand shot.

Crowell told me that the Gary Player Center allows golfers to hit shots they face when actually playing. They can work on various distance shots (from around 20 to 118 yards) from the five teeing grounds and build a feeling of confidence that they can hit any short-iron shot. They take that confidence and ability out onto the course.

Glen Arbor also offers what is known as The Legends Center, located in a small hollow close to the Gary Player Center that is comprised of three separate green complexes. This is where golfers practice pitch shots and bunker play to a variety of hole locations. By the way, there are several traditional practice putting greens located on the club’s property. The total area of the practice facilities at Glen Arbor is around five acres.

The Teaching Center has all the bells and whistles and contains the latest in computer technology, with a V-1 Professional coaching system allowing students to learn at an advanced rate through a visual understanding of the golf swing. Through an online “lesson locker” students can receive via email videos of their swings and instructional tools.

Being invited to honor Dottie Pepper proved a perfect way to test out what is one of the most all-encompassing playing and practice facilities in the Tri-State area of New York, Connecticut and New Jersey.