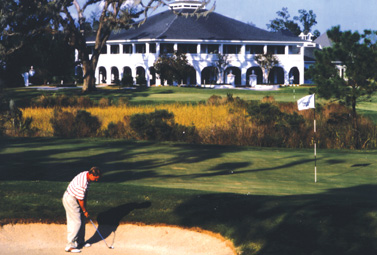 A state that has a license plate proclaiming it as “First In Golf” had better live up to the boast. And South Carolina certainly does that. Whether it is Myrtle Beach, Charleston, Hilton Head, or Santee, there is a plethora of quality golf courses in the Lowcountry area of the Palmetto State that can rightly stake claim as among the best in the country.

Naturally, every golfer worth his or her titanium driver knows about Myrtle Beach and its “Grand Strand” of layouts that stretch from Pawley’s Island in the south to the Brunswick Island area in southeastern coastal North Carolina. There are almost 100 courses scattered along the Grand Strand, which also features active lifestyle communities, beaches, nightlife, restaurants, entertainment and more.

Pawley’s Plantation Golf and Country Club and The Dunes Golf Club have both received numerous awards over the years for their exquisite designs, fabulous scenery and challenging routings that wander through the area’s wetlands and marshes that define Lowcountry golf.

Champion golfer turned architect, Jack Nicklaus, designed the course at Pawley’s Plantation and he believes it is one of his best works, sprawling over 582 lush acres. Nicklaus said, “I have a particular fondness for the Low country area. We used what’s here, without forcing or changing what Mother Nature provided.” The course’s challenge hits you right away; with the 511-yard par-five first, the monstrous 461-yard par-four second (number one handicap hole), the 194-yard par-three third, and the 543-yard par-five fourth.

Not far away is a classic Rees Jones design, the golf course at The Dunes Beach and Club. This may be the toughest course on the Grand Strand, with a rating of 76.1, five over stated par, and a slope rating of 148. “Waterloo,” hole 13, is the signature hole of the Dunes Course. Famous worldwide, it is a hole where Lake Singleton comes into play. “Waterloo” is regarded as one of the greatest golf holes in the world.

Take a ride down Route 17 and try out several of the state’s best Lowcountry tracks, located near Charleston, The Holy City, where living is easy and the fun never ends.

The famed Ocean Course at Kiawah Island Golf Resort on John’s Island, just south of Charleston, is a must-play on every golfer’s list. Everywhere you look it is one delicious view after another. The course has hosted a Ryder Cup, the PGA Championship, the Senior PGA Championship, and will be the site of the 103rd PGA Championship in 2021.

The Ocean Course has more seaside holes than any other course in North America, 10 along the Atlantic Ocean with the other eight running parallel to those. The course stretches along nearly three miles of ocean at the eastern end of Kiawah Island, The Ocean Course can be extended to 7,676 yards (ouch). The front nine is pretty, yes, but it isn’t until the back nine that The Ocean Course unfolds its ultimate splendor. If the breeze is up, like it is on most days, playing the stretch of holes five through 14 can be brutal.

Driving into Dunes West Golf and River Club in Mount Pleasant is a bit like stepping back in time (and a little like walking up Magnolia Lane at Augusta National Golf Club), riding up a long entrance that takes you past tall live oaks draped with Spanish moss. The Arthur Hills golf course at Dunes West plays anywhere from 6,859 yards down to 5,208 yards from the forward markers. Water comes into play on seven holes and the fairways are fairly large and forgiving. The greens are mildly undulating and guarded by bunkers, both sand and grass. I find Dunes West a pleasant challenge in that there is enough bite to keep your attention on matters at hand, but open enough off the tees with a minimum of forced carries. Dunes West is a well-rounded sporting club, with nine tennis courts, three pools (one adult only and one with a slide and zero entry for toddlers); a fitness and aerobics room; a playground; a boat ramp; plus miles of sidewalks for walking, running and biking.

Wild Dunes Resort on the Isle of Palms, a part of Mount Pleasant, is a place to relax, golf, swim, and play tennis. The resort is located on the barrier island, only 30 minutes from downtown Charleston, and occupies about 1,600 acres between the Atlantic Ocean and the Intracoastal Waterway. Wild Dunes has become famous for its two Tom Fazio-designed layouts; the Links Course and the Harbor Course, which offer 36 holes of championship golf. Their unique, thoughtful routings serve as pleasant contrasts to one another. I’ve had the opportunity to play both courses and they are challenging, visually pleasing and enjoyable for any level of golfer.

One of Tom Fazio’s first courses, the par-72 Links Course captures the natural beauty of the area, with rolling fairways framed by lush palms and finishing holes overlooking the Atlantic Ocean. The par-70 Bay Course is shorter in total length than its sister track and features various water views, from lagoons to salt water marshes to the Intracoastal Waterway

The enclave of Daniel Island is an ideal place to work, live and play amid the Carolina sunshine. The Daniel Island Club has two superb courses, Ralston Creek and Beresford Creek. I’ve played both. Ralston Creek is a Rees Jones work that is newer than its sister course, designed by Tom Fazio, but just as good. Picking one over the other is like choosing between pecan and peach pie. They both leave a smile on your face. Ralston Creek is a bit flatter than Beresford Creek and its routing brings the wetlands a tad more into play. Both private layouts offer a sense of tranquility.

Drive again a bit down Route 17 and you will run into Hilton Head, a community and island that really needs no introduction to golf aficionados. Sea Pines Resort’s Harbour Town Golf Links is home of the PGA Tour’s RBC Heritage golf tournament, the only regular PGA stop in South Carolina. The course, one of the toughest in the world, places a premium on finesse, imagination and shot-making rather than strength. You can put your game to the ultimate test against a collection of par-threes ranked among the world’s finest, and the par-4 18th hole, with its iconic candy cane lighthouse, is considered one of the most feared in all of golf, particularly when the wind is blowing off Calibogue Sound. Hilton head has been a haven for retirees and second-home owners for years, with so much to do it might take years to fit it all in.

The town of Santee is located just off Route 95, about an hour northeast of Charleston. It has become a golfing hotbed in its own right, offering a palatable combination of good to very good courses at affordable prices. You might call Santee blue collar golf at its best. Santee’s portfolio is nonetheless impressive. Santee National Golf Club is considered one of the best layouts in the Palmetto State, and the course’s managers pride themselves on its immaculate condition. The routing offers a pleasing blend a traditional Lowcountry holes, designed over a somewhat atypical rolling terrain. Five strategically placed lakes bring water into play on a number of holes. The course plays 6,858 yards from the tips with three other sets of tees. Number 18 is a great finishing hole, a 524-yard, par-five that has a lake guarding the right side of the fairway and green.