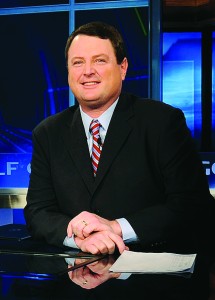 I caught up with the seemingly always smiling Charlie Rymer recently and took him aside for a quick chat.

The native of Fort Mill, S.C. has been treating golf fans to his quick wit and down home Good Ol’ Boy humor since he came on the scene in 1998 as a sports commentator for ESPN. This past year, Rymer has been a mainstay on The Golf Channel as a full-time studio analyst, working on a number of shows and adding big smile spice to Golf Central broadcasts. Relying on his experiences on the PGA and then Nationwide tours (he was a better player than he’ll admit to), Rymer uses his views on life and golf to entertain audiences all over the world.

After graduating as a two-time All-America at Georgia Tech, Rymer, who now lives in Orlando, Fl., spent over 10 years playing professional golf and recorded his best finish on the PGA Tour with a third-place finish at the Shell Houston Open in 1995. He also shot a 61 at the 1996 Byron Nelson Classic and won the 1994 Nationwide Tour South Carolina Classic.

“Things are going great,” Charlie said. “I’ve been able to do many different things, work with great people and it’s been a fun and eye opening experience. I’ve done a lot of in-studio stuff and also have gotten out to do color for LPGA events. I haven’t gotten fired yet, which is good.”

Charlie told me that one of the biggest surprises he has had working in television so far is the fact that it’s harder then he thought it would be.

“There is so much preparation that goes into a show and you have to do your homework or else you risk looking foolish on the air.”

The ebullient Rymer recently moved to Orlando, Fl., quite near the Golf Channel studios, which makes getting to and from work a breeze. It also allows him to spend as much time as possible with his children.

“Living in Orlando has allowed me to be a much better father to my two sons, Charlie, who is 13, and Hayden, who is 12, because I live only a mile or so from the studio and I’m home most of the time. When I was playing, I was on the road all the time. Now, it’s only a few weeks out of the year.”

Charlie’s kids are pretty good players but they haven’t gotten close to beating their old man yet.

“We have come down the back nine with them fairly close a few times but it’s still a way off, I hope. Pretty much all the golf I play these days is family golf.”

Rymer said he doesn’t miss competing as a Tour pro.

“Oh, there are days when I have these dreams about being able to compete but then I go to the course to play and I get a wake-up call. My days of competing seriously are over. My game really isn’t suited for public display.

It is obvious in Charlie’s on-air style that he truly enjoys the game he covers.

“I do love the game. It’s something I have been able to do my whole life and I treat it with respect. That’s how I approach my job. I try to be honest, fair, and respectful . I know what it is like for guys trying to make a living at golf and it isn’t easy. Some people may think I’m being soft sometimes on players. But I try to look into a person’s background and find out why something happened rather than just criticizing them.”

He’s got a pretty simplistic approach to his job and the game.

“Golf is a game and it is a diversion for people. It gives us some time to forget about our problems and enjoy ourselves. I try to have fun with it and help other people have fun along the way.”