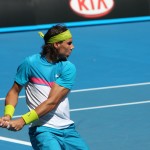 For all of you so eager to bury Rafael Nadal in the hard red clay at Roland Garros you’d better think again.

Nadal, who struggled through the first two rounds of the French Open, looked his old self in dispatching the upstart Croatian, Antonio Veic, in straight sets (1, 3, and 0). It was not so much that Rafa beat Veic, it was the way he did it. Nadal was at his devastating best on the clay, running  all over the court, crushing forehands, returning serve brilliantly, and nailing first serves to all sides of the service boxes.

There are those, and I can’t blame them, who say that Novak Djokovic is now the man to beat. How can you argue with that philosophy? I mean, the guy has won 40 straight matches and seems indestructible now that he is gluten-free and in the best physical and mental shape of his life. In the third round, he beat Juan Martin Del Potro, the would-be comeback kid, who has shown signs that he will once again be among the top five or six players expected to have a chance at winning every Major this year.

The Joker is playing with supreme confidence, his ground strokes from both wings are as pure and effective as they get, his serve has improved, especially his first serve percentage, and his defense is perhaps as good as anybody who has ever played the game.

So, can Novak beat Rafa in the finals? Of course he can. After all, the Serb whipped up on Rafa in the finals at both the Madrid Open and the Italian Open, high-profile preludes to the French. The biggest plus The Joker has on his side is his new-found confidence. That’s what winning 40 consecutive matches and beating the other great players in the game within a few months will do for you.

But I’m not counting Rafa out just yet. He’s got a big matchup with Sweden’s Robin Soderling looming in the middle of the second week, if both manage to advance past the fourth round, which seems a given at this point. Remember, Soderling is the only guy who has beaten Nadal (41-1) at the French Open and it will surely be a test for Rafa to get past the big hitting Soderling.

Nadal is a prideful man and player. The French Open is his personal playground and the sting of being beaten by Soderling and then seeing Roger Federer raise his first and only French Open loving cup two years ago still smarts.

For my money, I’m sticking with Rafa all the way and to beat The Joker in one of the most highly anticipated matches of the last few years. Bigger than Nadal versus Federer? It’s tough to top those two in a final. But the way Novak is playing, he is clearly the best player in the game right now and a win over Nadal would vault him to the top level of tennis and set the stage for the possibility of a rare Grand Slam.

But he’s got to get by the King of Clay and I believe Rafa has one more great effort on the terra batu left in his quickly aging body.