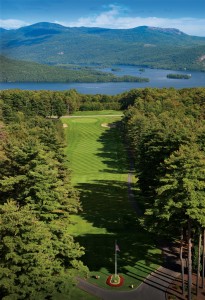 The first impression that hits you smack in the face when you pull into The Sagamore Hotel on Lake George, N.Y. is its location. The guest entrance is actually somewhat at the rear of the building so it takes you awhile to realize The Sagamore’s best side faces the lake and what a side it is.

The hotel stands like a majestic white lady, gracing the waters of this classic resort located in Bolton Landing just as it as for over 100 years. One of the coolest parts, literally and figuratively, of a stay at The Sagamore is taking a dinner cruise on the hotel’s yacht, The Morgan, and looking back at the hotel sitting on a slight rise, its manicured lawns and terraces dripping to the shore of one of the country’s truly magnificent (and clean) bodies of water.

Lake George, which French and British settlers and their Native American allies traversed during the 1600’s and 1700’s to stage raids on one another’s land, is a treat for the eyes at any time of the year. I’ve had the pleasure of staying there on a number of occasions. One of the most memorable rides on The Morgan was on a cool late spring afternoon when some snow that had fallen the previous evening still clung to the treetops on the several-thousand-foot Adirondack Mountains that embrace the lake and slide down to meet it. Needless to say, the sunset was glorious, the last rays of the day hitting the tops of the trees and making the white stuff glisten with a slightly golden hue.

The hotel is masterpiece of design—stately and tastefully decorated. The cuisine is excellent and varied and the ambiance subtle but impressive at the same time, especially when sitting on the patio and watching the world sail by.

The Sagamore’s golf course is located about two miles away from the hotel as the crow flies and is sited on a hilltop. The classic resort course, which was designed by, yep, you guessed it, Donald Ross, is considered one of his finest works. The layout has been restored during the past 20 years, and the work only enhanced Ross’s original routing.

From the first tee, with its view of Lake George in the distance, The Sagamore’s golf course is like an unfolding gem of early golf course design, with fairways that follow the natural terrain, dramatic elevation changes, undulating greens and greenside bunkers a whitetail deer could hide in.

The first hole is a perfect way to start a round and it just may the best view on the entire golf course. The 435-yard par-four begins from a dramatically elevated tee that affords a view of Lake George in the distance. The hole drops down into a valley and the approach is back up to a raised green.

The second, a 375-yard par-four is a fun hole. The big hitters shorten the dogleg right by taking the tee shot over a huge pine tree that guards the corner, thus shortening the path to the cup considerably.

The third is a very demanding, 217-yard par-three that plays slightly uphill. Don’t miss the green to the right or you will find yourself in deep trouble in the form of woods and a massive bunker.

I really like the stretch of holes five through eight. They make you think out each shot and use pretty much every club in the bag. The fifth is a 380-yard par-four where I usually hit a cautious driver to the edge of a pond, which leaves me with a short iron into an elevated green. The sixth is a super par-five that plays only 495 yards from the tips. After a good tee shot I’m left with a choice: Go for the green in two with a fairway wood or lay up to around 100 yards and attack with a wedge. For me the play is usually always to go for this green on the second shot but you have to be careful. There’s water to the right of the green approach and a bothersome tree on the left side that I have been behind way too many times, leaving me to try and poke something under the branches and run a shot onto the green.

The sixth may indeed be the best hole on the course. It’s a 425-yard par-four that bends dramatically uphill and to the left. I’ll hit a driver and hug the left side near the woods in order to have the ball roll down a hill and into the fairway. It’s at least a club extra on the approach and you had better not hit it right (woods) or short (deep trap).

The 10th is another visually attractive hole. Your drive will settle on a hill overlooking the remainder of the fairway and putting surface tucked in a hollow below.

While the seventh hole may be the best Ross designed for The Sagamore Golf Course, the fourth is probably the most demanding. I considered it one of the highlights of my golfing career when I laced a tee shot over a hill to a fairway that lies beyond and is circled by water right and front and woods left. I still had a fairway wood left and I crushed a shot to the elevated green, leaving a 40-foot putt from the left side. Rolling the putt in for a birdie made me feel as if I had just scored a hole-in-one, only that it took me three shots instead of one.

The 16th is another nice, short par-four. It plays just 366 yards from the back but the tee shot has to be struck well enough to reach the top of a rise to leave an unfettered approach into an elevated green that sits across a stream.

The Sagamore plays quite differently during various seasons. In spring, when the course is wet from the receding snowpack or rains, it plays much longer than its 6,800 yards (par 70). During the summer and fall, the course is in mint condition and drives will roll out, leaving you much shorter approach shots.

Being a great, or even a good, golfer isn’t a prerequisite for enjoying The Sagamore. Immersing oneself in the natural beauty through which many of the holes are routed, and letting the genius of Ross sink in as you face decision after decision is reward enough. By the way, legend has it that Ross imported heather from his native Scotland to plant along some of the holes. The Sagamore has been compared by some as the equal or better than such Ross notables in the region as Oak Hill and Salem country clubs.

The Sagamore is located a half an hour from Albany, two hours from New York City, and three hours from Boston. Other sporting amenities at the resort include tennis courts; an indoor recreation center; boating; sailing; and swimming.