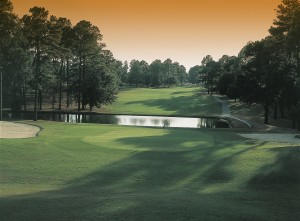 Wait, you’re saying. I recognize the first four as Meccas of golf in South Carolina. But the last one. Hmm, not familiar with it.

Well, a lot of people don’t know about this hotbed of affordable and very good golf located about an hour’s drive northwest of Charleston.

While the Santee area has a bit of a way to go to beat its sister South Carolina locales as a big time golf destination, the area is being aggressively marketed, and more and more golfers are finding out about this great little gem.

Santee Golf has been arranging inexpensive golf packages for winter weary northerners and Canadians for the past 17 years or so and word is slowly spreading that the area is a nice alterative to the other above-mentioned Palmetto State golf havens. Golf Santee is actually a collaborative effort between 16 golf courses and various inns, hotels and resorts that has been key to Santee’s growth.

Don’t think that because Santee is considered an affordable golf destination that you’re getting low grade hotels and dog trap courses. The lodging is good to very good and the courses in the Santee cache range from solid to exceptional. You won’t find the glitter, nightlife, restaurants and shopping of a Myrtle Beach or the glamour of Hilton Head and Kiawah, but there is enough to do in the area to keep you busy après golf for a week. And, the city of Charleston and its restaurants and nightlife is only an hour’s drive or less depending upon where you are headquartered for your stay in the area.

Santee draws heavily from the Midwest states and Canada with Ohio the number one feeder state. The Canadian market is also becoming hot and Santee Golf officials say they are also drawing from the Florida market, as residents of the Sunshine State come north during the summer to seek cooler weather.

All 16 courses in the Santee portfolio are within a 50 minute drive from the town, which is located a well hit tee shot from Rt. 95, and 80 percent of them are within a 30 minute drive. Courses located in Santee include Santee National Golf Club, Santee Cooper River Country Club and Lake Marian Golf Club. Santee itself is a charming Old South town of around 6,000 located near the junction of interstates 95 and 25.

Santee National Golf Club is considered one of the best layouts in the Palmetto State, and courses such as Santee Cooper River Country Club, Lake Marion Golf Course, Wyboo Golf Club, Orangeburg Country Club, The Club at Pine Forest, and Legend Oaks Plantation Golf Club have all been rated highly among various publications.

I had a chance to play Lake Marion Golf Course on the way back from a trip to the Lowcountry. It offers a rolling terrain and well placed hazards that put a demand on accurate shot making and proper club selection. The fairways here are fairly wide and forgiving, although danger lurks if your tee shot wanders too far either way.

It’s a very playable course that won’t beat you up and was busy when I visited. The guys in front of us were visiting from Toronto and said Lake Marion was one of the better tracks they had played on their journey south. The conditions were very good, especially for early spring and after an unusually cold winter in the southland. The rough wasn’t up but when it grows tall it puts a bite in courses like Lake Marion that play relatively easy off the tee. The greens were in great shape and had quite a bit of undulation. Their speed was on the slow side, which took a bit of getting used to.

One of the best holes comes at you right out of the box. The par-five plays just under 500 yards but you have to make a decision with your second shot if you bomb a drive. A pond sits about 50 yards in front of the green, which makes going for the putting surface or near it in two very risky.

The 14th hole is a great par-four, measuring just over 300 yards. Water guards the entire right side of the fairway on this sharp dogleg right and the pond also has to be negotiated on the approach.

The average temperature during April in Santee is around 76 degrees, rising during the summer months and falling back to 76 in October, 66 in November and 58 in December, making Santee ideal for an early spring or late fall excursion.

Santee Cooper Country Club is also located on property and is another solid layout that features tree-lined fairways and water hazards. The course plays 6,512 yards from the tips with three other sets of tees.

Santee National Golf Club’s quality is said to rival the best South Carolina courses and the course’s managers pride themselves on its condition. The routing offers a blend a traditional Lowcountry holes, designed over a somewhat atypical rolling terrain. Five strategically placed lakes bring water into play on a number of holes. The course plays 6,858 yards from the tips with three other sets of tees. Number 18 is a great finishing hole, a 524-yard, par-five that has a lake guarding the right side of the fairway and green.

Wyboo Golf Club has lots of water hazards, native grasses an marshland to complicate navigation. It is selected annually as one of the best courses in South Carolina. Orangeburg Country Club was recently renovated to rave reviews and has views the Edisto River. The Club at Pine Forest was carved through Carolina pines, live oaks and dogwoods and has a feeling of a true Lowcountry course. Legend Oaks Plantation Golf Club was voted the South Carolina Course of the year for 2010.

For further information about golf in the Santee area and stay and play packages, which start from $55 per day, visit www.santeecoopergolf.com or call 800-344-6534.