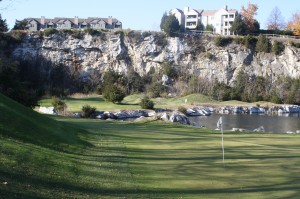 The View Back to the 11th Tee. (Photo by Mark Eucalitto) 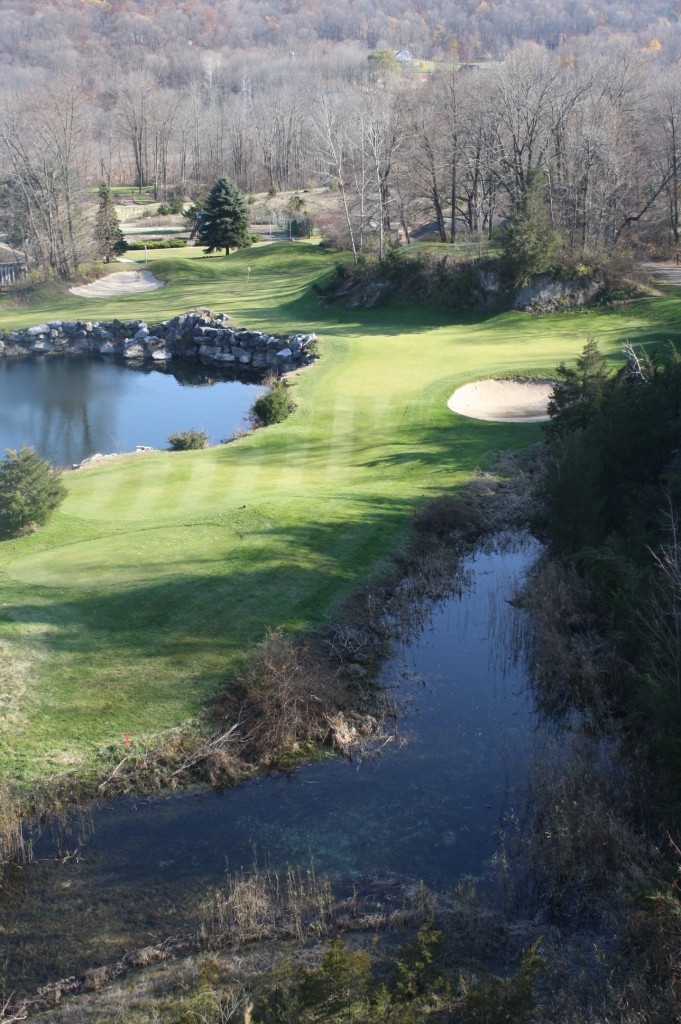 The Magical 11th at Crystal Springs (Photo by Mark Eucalitto)

This is a little tale about golfing guts, glory, disappointment, screaming schoolgirls, and bad manners. Yes, a lot can happen on a par-three.

The wandering Fearsome Foursome of myself, Mark Eucalitto, Dana Mosher and Vin Serella were enjoying a round at the Crystal Springs golf course, which is part of a fab lineup of tracks at the resort of the same name in northwest New Jersey. We drove our carts up a hill to the 11th hole where spread before us like golfing Valhalla was the layout’s famed par-three, known as “The Quarry Hole.”

As you walk to the tee a marvelous sight unfolds some 75 or 80 below, the aforementioned quarry, with its black waters menacing and fearful, a small, tree-studded hill some 170 yards away and a massive green snaking past the quarry and back around the hillock. To add to the difficulty a yawning bunker sits to the back left of the green. (There’s also a wetlands below the tee box and a bunker in front of the sprawling green that didn’t come into play this day.)  In the distance, the hills of the Sussex Highlands rise and serve as a perfect backdrop to the visually exciting par-three.

Okay. I know all about the 17th at Cypress Point, the 11th at Pine Valley, the 17th on the Stadium Course at TPC Sawgrass and so many other island greens and magical short holes. But the 11th at Crystal Springs is the most impressive par-three I have played.

While the hole can be relatively easy if the pin is stuck in the front portion of the green (nothing more than a seven- or eight-iron) the day we played the flag was just barely visible in the shadows at the very back of the putting surface, some 185 yards away. Intimidating? How about gut-check time? We began to ponder what club we would hit as the foursome in front of us began to putt.

But first a lesson in proper golf course etiquette. Naturally, the 11th backs up with groups because of its difficulty and majesty that demands you linger a bit and take it all in. The foursome behind us, instead of laying back a respectful amount of distance, drove up behind us on the very tight tee box area. Two players, without saying a word, get out, step onto the tee and start getting a read on the distance to the flag with a yardage finder.

Tip: If you are going to do something as rude as these guys did at least say something to the group ahead of you, like maybe “Hi, nice day,” or, “Do you mind if we get a look and a read.” Nothing from these jerks. Except that one of the guys yelled to the group playing the hole below to “Hurry up.” As my buddy Mark says, the tee box is sacred ground. Unless you are next to hit, stay off it and give the group playing the hole their space. Not wanting to make a fuss, especially with such a difficult tee shot facing us, we kept quiet, gave them a glare when we left and played the hole verrrrry slowly.

Back to the task at hand. Mark and Dana hit first with Mark putting the ball in the back left bunker and Dana hitting a pure seven-wood to within 20 feet. I pulled a four-iron, blocked the dopes behind us and the view out of my mind and struck a solid shot that caught the green and rolled to within 35 feet. Whew. Vin also joined Mark in the back bunker.

Actually finishing the hole out was anticlimactic, except for the view back to the tee from the green, with the white and gray cliffs rising from the quarry. Just fabulous.

Another aside: Prior to our putts, Dana had to scold several girls from a nearby school that were running amuck close to the green. “This is a golf course, for crying out loud.” Told you a lot can happen on a par-three.

Anyway, Dana two putts, Mark and Vin take bogeys out of the sand, so it’s up to me to two-putt to tie the hole or somehow drop the birdie putt. Too concerned with the line I came up five feet short and missed the par putt. What began with such a satisfying shot ended in bitter disappointment. It would have been a sweet par. It’s what makes golf so mesmerizing and frustrating. It took me one shot to go 175 yards from a tee 80 feet above the ground, over a quarry pond, and three strokes to get down from 10 yards. Go figure.

But today the only thought I have is that tee shot, soaring majestically high in the air, its arch over the quarry probably some 200 or more feet, and landing softly on a putting surface that I could hardly see. Nice.

If only every par-three could be like the 11th at Crystal Springs.

Check this super course out (there are plenty of other interesting holes on the layout), as well the other tracks at Crystal Springs Resort, like the linksy Ballyowen, which we played in the wind and 45-degree temperatures, and Wild Turkey, two of the better courses in Jersey.