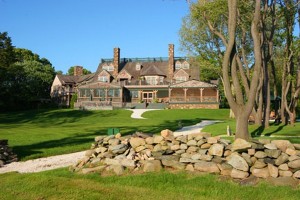 The impression that strikes you as you drive into the Carnegie Abbey Club, located just outside of Newport, R.I., is the peacefulness of the place.

Of course this is by design, as the developers of the Club wanted to create a private sporting enclave far away from the maddening crowds and tourists. Mission accomplished.

Only the name of a small stream, dubbed “Bloody Run Brook,” site of a nasty encounter between British Redcoats and the Rhode Island Militia during the Revolutionary War, gives any indication that this spot was not always a refuge from the world. In fact, the Narragansett Indians called the area Aquidneck, or “Isle of Peace. Wondering about the name of the Club? Well yes, a Benedictine monastery was established here in 1900 and the monks remain owner and steward of the coastal preserve. Carnegie Abbey now boasts not only golf but tennis, sport fishing, sailing and an equestrian center, making it a true “sporting club.”

But we were here for the golf and the Donald Steele-designed layout didn’t disappoint. Carnegie Abbey was the Scotsman’s second U.S. course, the first being Cherokee Plantation in South Carolina. A much underrated architect in this country, Steele is in fact one of the world’s foremost links and traditional-style designers. He made his reputation for his work on seaside links, and was appointed as architect of the Carnegie Links at Skibo Castle in Scotland, three miles from Royal Dornoch. He was also responsible for the major redesign of the No. 2 course at Royal County Down, and the Arran course at Turnberry.

Steele worked magic at Carnegie Abbey. Given a notable piece of property, forested yet located close to Narragansett Bay, he routed the course for the most part over the existing terrain and meshed the holes to form a most interesting journey. Steele incorporated traditional Scottish-style revetted sod bunkers, not many but enough, into the course to create real havoc for errant shots off the tee and to the rather large greens.

Carnegie Abbey certainly isn’t a long course, measuring 6,675 yards from the tips. But it’s all about placement off the tee. You catch glimpses of the ocean from many of the beginning holes and then the water really hits you as you finish the round. But more about that later.

Steele gives you a fairly uncomplicated par-five, measuring 521 yards from the back, to begin your round. A strong drive and a fairway woods gets you on or close to the putting surface. Myself and a couple of buddies brought along a local pro, Greg Miller, to test the Abbey and he constantly blew it by us on the way to a low round that included five birdies. So, you see, Carnegie Abbey won’t destroy you, as Greg proved.

Anyway, most of Carnegie Abbey’s early bite comes over the next several holes, which includes 411- and 410-yard par-fours and a long par-three, the second, which I attacked with a long iron and found the green. Number six is a great par-four, playing 411 yards, with the drive having to bend around or taken over a cluster of trees to the left. I was able to shorten the dogleg left hole by taking it over the trees and was left with an eight-iron. But you miss and you pay the price. Take you drive to the right to play safe and you are left with a very long approach.

The back side concludes with another reachable-in-two par-five of 500 yards, Greg just smashed his drive and was able to attack the green with relish. It’s a nice three-shot hole for us mortals and a pleasant way to end the par-35 front side.

Once you’ve finished the outwards nine, hitch up your pants because Carnegie Abbey gets real tough for the average player on the back, par-36 nine. After the par-four, 424-yard 10th, which has a double fairway, you’ve got to figure out how to find the green on the 225-yard par-three 11th, which plays 210 yards from the “members” tees. I had to hit fairway wood and couldn’t find the putting surface. Four isn’t a bad score on the hole and I was happy to take bogey and walk away.

The 520-yard 12th is another relatively benign par-five, but the 444-yard 14th is a beast, especially if the wind is blowing, which thankfully it wasn’t this day. I hit a fairly good drive and was left with a three-wood, which I calmly placed just off the green to the right. The four I made felt like a birdie.

Two of the next three holes are par-fours measuring well over 400 yards, with a 541-yard par-five tossed in at 15. All three are good holes and relatively straight-forward with no gimmicks, a nice element of Donald Steele courses.

The best part of the round comes at the end. You get a great view of the bay from the tee box of the tough 202-yard par-three 17th, and then it hits you in the face, quite literally on windy days, as you stand on the tee box of the very short, 280-yard par-four finisher.

This is one of the neatest holes I have ever come across. The tee sits in the bay and the drive must find a narrow strip of fairway that sits before the stunning clubhouse. On the first play it is difficult to judge the distance you need to find the short stuff. Of course, big hitters can try and drive the green. But the putting surface hugs the water, so you had better by true.

All of us laid up to the fairway, with Greg taking out a three-wood (way too much club for him) and depositing his golf ball into the shrubbery in front of the clubhouse. Oops. A free drop later, he got up and down for birdie. The green is sloped, which makes two-putting a challenge, even if you are only coming in with a half wedge.

After golf we had a chance to hang out in the clubhouse, where the fireplace was roaring on a chilly late winter day. We ordered some calamari and downed a few suds, all the while starring out at the bay. Nice view. True to the flavor of a Scottish club, the bar area boasts an enormous selection of single malts and word is that the members sample each one, not in one night, of course.

If invited by a guest or a guest of a member, you can rent accommodations at Carnegie Abbey for a night, weekend or a week, actually at quite reasonable prices if you stay during “low-season.” Most rooms have a view of the golf course or the bay. You visit in high-season, i.e. the summer, and you’ll pay, just like anywhere you go in Newport, the playground of the rich and famous for generations. Renting gives you access to play the course if approved by the referring member.

There are also private homes located on the property, built in a typical New England seaside architectural style. They range up to several million bucks in price.