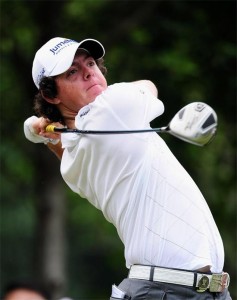 Can “The Kid” close the deal?

I’m not betting against Rory McIlroy, at the tender age of 21, winning The Masters title today. But I’m not convinced he’s going to be putting on the green jacket when the last tender rays of April sunshine streak across Augusta National Golf Club this evening.

The young man from Northern Ireland certainly hasn’t given any indication that he can’t close it out, as he enters today’s final round with a four-stroke lead. He has won before on the PGA Tour, shooting a scintillating 62 in the final round to take last year’s event at Quail Hollow in convincing style. That’s a good sign. And he’s been battle tested way beyond his tender years in international competition. He’s certainly is striking the ball oh so well and playing smart golf.

But…..hmmm, those final 18 holes, especially the final nine, Sunday at Augusta can do strange things to a man.

I’ve got to believe being paired with El Pato, Angel Cabrera, won’t help McIlroy. Cabrera is an intimidating presence, has won at Augusta, and is one of those guys that plays golf like big stakes poker. In other words, he’s a master competitor, can throw you off your game, and rises to the occasion when the big money, and prize, is on the line.

There are a host of other superb players waiting to make a charge if McIlroy stumbles early, not the least of which is Tiger Woods. Tiger had a lousy 74 on Saturday, just missing putts and hitting several poor shots that cost him down the stretch. Afterwards, he was pithy in interviews and annoyed at the world. Yes, he’s seven shots back of McIlroy. But as we know, it really isn’t how many shots you’re behind the leader it’s how many you are behind the guy(s) in second place. In Tiger’s case it’s only three shots. McIlroy may stumble, even blow up today. Tiger makes a few birdies early to get to seven- or eight-under and it’s game on.

But back to McIlroy’s chances. You have to love the way he is striking the ball. His caddie, J.P. Fitzgerald, said in a decided understatement that The Kid hits his irons well. And that he does, lads. He’s got a beautiful, fluid swing custom built to help him maintain balance, composure and shot-making ability in the most trying of times. He’s getting off the tee well (an absolute must today) and his short game is solid. There has been nothing in his first three rounds to indicate that he shouldn’t be able to play well today and be there at the end.

But I’m not totally convinced. With veterans like Cabrera, K.J. Choi Adam Scott and Luke Donald, as well as the vastly underrated Charl Schwartzel, close on his tail and Tiger lurking in the azaleas, it’s going to be a difficult task for the youngster to bring it to the house, or rather, cabin. And wouldn’t it be something if Freddie Couples got it rolling today!

A win by McIlroy would be good for the game, validating all the hype about the young guns that have burst onto the scene during the last two years. He’ll attract the Gen Y crowd and hopefully inject youthful enthusiasm into the game the way Tiger did in the late 1990’s and early 2000’s.

We’ll see if The Kid from Ireland will–and wouldn’t it be very appropriate—be wearin’ the green this evening.