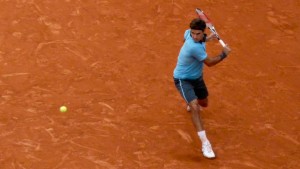 I mean, isn’t it refreshing in this age of Tiger Woods, college football scandals and overpriced, egomaniacal professional football and baseball players that a man can remain so humble and devoted to his sport and fans? What a great example for not only young kids but adults as well.

First off, the guy is beautiful to watch play, kind of like getting the chance to view Picasso or Michelangelo work, and he carries himself with such distinction off the court. But what I’m most impressed about is his obvious love for the game. Here’s a guy who has played tennis virtually his entire life, received all the accolades anyone could ever expect, won 16 Grand Slam titles and countless other tournaments and accumulated more money than he knows what to do with and he seems as though he enjoys the simple act of hitting ball with racquet more than ever.

During the interview he talked about remaining hungry and trying to figure out ways to beat Rafa Nadal and Novak Djokovic, his main rivals these days and grab another Major title or two or three. He said he has no thoughts of stepping away from the game or even slowing down for that matter. He looks as fit as ever at 30 and maintains a strict workout regimen that allows him to outlast players five to 10 years his junior.

Fed even mentioned Ken Rosewall and Jimmy Connors, two guys who were still playing high quality tennis near the age of 40. He said that wasn’t one of his goals but he said it with a laugh. I for one hope Roger sticks around for another 10 years and gives us the opportunity to watch perhaps the most perfect tennis player that has ever walked the earth do his thing.

On that Tennis Channel versus Cablevision fiasco, it’s another case of two greedy companies trying to squeeze an extra buck out of the other–actually out of us. And in the end, who gets screwed? Yep, as always, the fan who allowed both companies to make money in the first place.

I could blame the Tennis Channel but this seems to be modus operandi for Cablevision. They have had more beefs with dedicated channels than I care to remember. I’m writing  a little note right now as I put my check for monthly service in an envelope, reminding them that “the dish” is always an option. If you are a Cablevision subscriber, I advise you do the same thing.