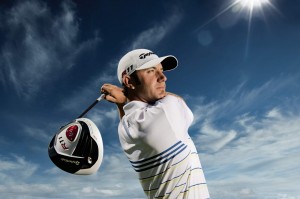 Despite his “whatever it is” relationship with LPGA glam girl Natalie Gulbis, Dustin Johnson remains one of the major “golf” stories as the 2011 season really gets ramped up.

Sure, Johnson had more words written about him on the Internet after his friendship with Gulbis went public than when he stepped into that waste bunker on the 72nd hole of the 2010 PGA Championship at Whistling Straits last August and grounded his club. Yet, real golf fans want to talk about Dustin and his enormous game, which is poised to win a Major in short order.

Is it too early in his career to label this guy “The Best Player Never to Have Won a Major.” I don’t think so.

The lanky 6-4, 190-pound, 26-year-old is already a four-time winner on the PGA Tour and finished fourth on the 2010 money list with almost $4.5 million. He hits the ball a ton–as evidenced by his 308.5-yard driving distance average last year—lands softly on lots of greens and makes a load of birdies and eagles.

He’s off to a great start in 2011, posting a third at the Farmers Insurance Open and a ninth at the Hyundai Tournament of Champions, winning almost a half million dollars combined.

Of course, Johnson came close twice last year to never having to wear the above-mentioned notorious moniker, with his close calls at both the U.S. Open and PGA Championship. The latter placed Johnson in golf’s folklore because of a crushing penalty he had to absorb for grounding his club in a “bunker” on the 72nd hole of the tournament and thus missing a playoff for the title. He also had a three-shot lead going into the final round of the U.S. Open at Pebble Beach but skied to an 82 in the fourth round to shoot himself out of contention.

In a display of his mental toughness and pure talent, he bounced back from those disappointments and enjoyed a solid finish to the 2010 campaign, including a win at the BMW Championship during the FedEx Cup Playoffs at season’s end.

Yeah, I know all a out the colorful (quite so!!!) Ricky Fowler and all his hair, Broadway Anthony Kim and the other young guns. But the former star at Coastal Carolina College (S.C.), who joined the PGA Tour in 2008, is clearly “The next big thing,” both literally and figuratively, on the Tour.

I had a chance to talk to him recently and he took a pragmatic approach to his up and down 2010 season, saying that he accomplished a number of his goals and learned from his disappointments.

“Winning the AT&T Pebble Beach was great and being a contender at the U.S Open and the PGA Championship was amazing.” On the latter two he says, “I don’t really feel like they were disappointing experiences. The results at the PGA and U.S. Open made me a stronger player and more excited for my first Major victory. I understood the situations and played well. I did the best I could and a lot of good things came out of those two weeks.”

Johnson didn’t mind the blazing glare of all the media attention after he blew the lead at the U.S. Open and then had his bad luck ruling at the PGA Championship.

“I don’t really read the press but from what I have heard they were great and very supportive. My fans are awesome and for that I’m lucky.”

Johnson has some lofty goals for 2011.

“I had a great year in 2010 and if I keep playing this way I believe I have a chance at to win a Major. I believe I also have the ability and strength to be a regular Ryder Cup member. If I keep playing like I am then there is no doubt about that. It’s exciting to think about doing that.”

Johnson and TaylorMade have developed a strong and fruitful professional relationship and marriage of talents and technology that Johnson believes has helped make him a better player.

“I have a great relationship with TaylorMade and I’m lucky there. The Tour reps take good care of me…they are supportive and work to make sure everything is right. It’s important that my equipment is fit and it makes it easy to have everything dialed in with the TaylorMade guys.”

Johnson, who has been hitting the new TaylorMade white crowned R11 driver early in 2011, says he “isn’t a tinkerer” when it comes to his equipment, although he does enjoy checking out the latest products that come out of TaylorMade’s R and D department.

“I like product but I rarely change my clubs. I stick with what I know and what works. I used to change my wedges often but with TaylorMade’s xFT wedges, the interchangeable face makes it so I only have to replace the grooves not the whole club. I like that.”

If Johnson can keep his focus on the course and not, well, elsewhere, he’ll have that “Major winner” tag placed in front of his name this year or next.