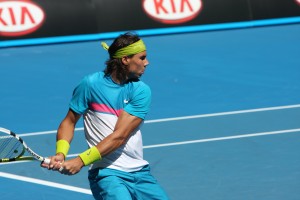 Rafa Nadal: Too Much Tennis?

After watching Rafael Nadal and Roger Federer collapse like a house of cards and Mardy Fish, Tomas Berdych, Novak Djokovic and Andy Murray stumble around like they are ready to be hauled out on a stretcher at any minute at the Western and Southern Open this week, I’m wondering if we don’t have too much tennis these days.

It’s ironic that I’m saying this about a sport that once had trouble getting all its top players together except at the Slams. But the wear and tear on today’s stars seems to be catching up them and the sport.

Berdych had to retire from his semifinal match with The Joker, who has a sore shoulder himself. Murray has a bum leg, although it only seems to bother him after points which he loses. Nadal looks spent, Fish has a foot injury, and Fed seems at the very least disinterested, not willing to put himself full out into a fight in the quarterfinals of a tournament in Cincinnati, which I’m sure he didn’t even know existed before he came to the United States.

There is simply too much tennis packed between the months of May and September. The French Open and Wimbledon are too close together but I’m certain neither Slam is going to accommodate anyone and move their event a week or two either way. The span between Wimbledon and the U.S. Open was fine, that is until the powers that be figured it would be fun and keep the fans interested if a U.S. Open Series was instituted involving lots of ranking points and tons of money, especially if you win both the Series and the U.S. Open. I don’t care who you are, a million bucks is not chump change.

So, the best players in the world are pretty much forced to compete during the summer in the U.S. (one tournament is in Canada) in the Open Series, and this at a time when their conditioning, muscles and ligaments are stretched thin. Factor in the travel and heat in places like Atlanta and Cincinnati, and the burden on these guys is just too much.

Go back a little further if you want, and think about Nadal, who played an aggressive clay court season leading up to the French Open, and you can understand why the wheels are starting to come off.

Listen, I love watching the top players play at one tournament. But I wonder if we are playing a dangerous game here. Are we perhaps not only watering down the heady excitement created by the Slams, while at the same time breaking the best players in the game down physically and mentally?

When it comes to men’s pro tennis, maybe a little less might prove to mean a lot more for players, the fans, and the health of the game.