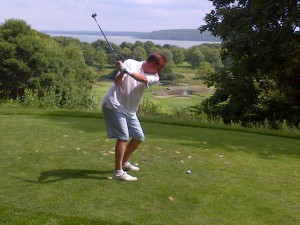 Batman and Superman are coming to Michigan. Word leaked the Michigan Film Office has approved 35-million dollars in incentives for the super sequel, which means Hollywood stars Ben Affleck, who will play Batman, Superman Henry Cavill and “Breaking Bad’s” Bryan Cranston, playing Lex Luthor, will be shooting the movie in Detroit and elsewhere in our state beginning in January.

Those, and other stars, can get celebrity travel advice from their showbiz colleagues who were spotted vacationing in Northern Michigan this summer.

Adam West, who played Batman on the television series, visited Lansing in late August and fondly recalled driving through the beautiful forests and resort areas of upper Michigan. So did Bob Eubanks, the legendary Newlywed Game show television host who was born in Flint but left the state at an early age.

Matthew Sayad, from Northport, on the Leelanau Peninsula, had two celebrity sightings. “I saw Chef Mario Batali and Tim Allen a few times. They both have places up here.” Batali specializes in Italian cooking, always wears orange Crocs, and appears on television shows “The Chew” and “Iron Chef America.” Tim Allen has appeared in many films include “The Santa Clause,” and “Wild Hogs.” He came to fame on the sitcom “Home Improvement.” Of course filmmaker Michael Moore has a home at Torch Lake and was readily visible at his Traverse City Film Festival in July.

Potential Presidential candidate Jeb Bush, the former Governor of Florida whose father and brother have already called the White House “home,” was forced to make a “Planes, Trains, and Automobiles”-type trip to Grand Hotel in early June when fog forced his evening flight from Grand Rapids to land in Pellston where he then continued by car, Shepler’s Mackinac Island Ferry and horse carriage!

Television sportscaster Jim Nantz, who calls the action on the PGA Tour and the Masters; the NFL and the SuperBowl; and the NCAA Basketball Tournament for CBS Sports, spent a few nights at Grand Hotel with his wife, mother and in-laws in July.

“Grand Hotel and Mackinac Island are special places. I will be an ambassador for them wherever I travel to,” said Nantz, who lives at Pebble Beach, California.

Two of his colleagues were in Northern Michigan, too, including former 49er’s and Lions coach Steve Mariucci, who now appears on the NFL Network, was in Marquette in late June for his Beacon House charity golf events at the Landmark Inn and Greywalls golf course, and English golf broadcaster Ben Wright, who spent two weeks at Crystal Mountain near Frankfurt. “They’ll have to pry me out of Northern Michigan when it is time to leave,” joked Wright, who lives in the Blue Ridge Mountains of North Carolina.

To all of these celebrities, Michigan was the star of the show!