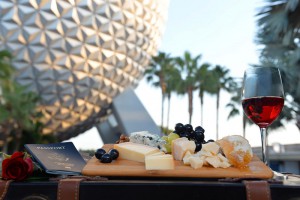 Rick Sylvain, a newspaper travel writer from Detroit, had already seen the rest of the world when, almost 20 years ago, he decided to settle down at Walt Disney World. “I saw more of the world than I’d ever dreamed of seeing, and it was a pleasure, but travel doesn’t have to be far to be fun, and it was always a grin to write about Disney,” says Sylvain. Working in public relations at the iconic Orlando resort still brings a smile to his face. “If I’m in the park and I see a little girl in a princess dress, or a grandparent dancing, or a stockbroker wearing Mickey Mouse ears, those are the moments that resonate with me and make me glad to be here.”

Given his background, it makes sense that Walt Disney World’s Epcot Center is his favorite of the themed parks. “Epcot is transporting and transforming. Among its’ attractions are 11 countries around a lagoon and in typical Disney fashion we try to make those faraway places as realistic as possible in amazing detail.”

That amazing detail, through November 10, will include even more international authenticity during the Epcot Food and Wine Festival, when countless other cuisines and cultures – from Patagonia to Puerto Rico – will be celebrated with tastings ranging from empanadas to escargot. Swill Limoncello in Venice or Riesling in Hamburg, for instance.

“It’s great to nosh and sip your way around the park and, in a sense, around the world,” says Sylvain. There’s no extra charge with no passport required, though you’ll meet “cast members” presenting each international exhibit who are actually from France, Germany, Norway, China, etc. The festival will also offer after-hours street parties and premium dining experiences. “The elevation of the food and beverage product over the time I have been here is amazing. We’re not just Mickey Bars and turkey legs anymore. Walt Disney World now has restaurants that can stand with any in the country. ‘Victoria and Alberts,’ in our Grand Floridian Hotel, is one only three five-diamond restaurants in the entire state of Florida.”

Sylvain says savvy park-goers know the crowds are smallest – and therefore the attraction lines shortest – in the autumn when you can also make reservations at Disney’s special, private Halloween parties (think black and orange fireworks) and Christmas receptions (think “Frozen”). And Disney’s themed resort hotels are offering 30-percent off room nights now until just before Christmas. At busier times of year, or any time, Sylvain says Disney now offers “My Magic Plus,” an innovative way to avoid long lines. “You go online at DisneyWorld.com, create an account, buy your park tickets, and at no extra charge you can then reserve the attractions and experiences you prefer ahead of time. You’ll get a coded wristband in the mail which allows you to breeze your way around the park and not stand in lines.”