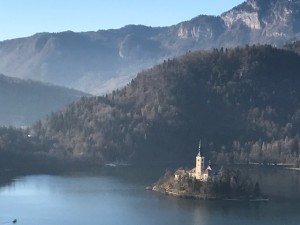 When model Melania Trump, in her robin’s egg blue Ralph Lauren designer outfit, became the first-ever foreign immigrant in history to become U.S. First Lady, tourism officials in her home country of Slovenia couldn’t have been prouder of their most prominent, international ambassador. Slovenia, a central European country adjacent to Italy featuring Adriatic Sea coastline and the Alps, might become better known to American travelers thanks to Trump and her Presidential husband Donald. Ironically, though, it was George W. Bush who gave Slovenia the first White House endorsement. Bush, in 2001, traveled to the pastoral Brdo pri Kranju estate in the little county’s northern region for a summit meeting with Russian President Vladimir Putin.

“I would urge people looking for a good vacation spot to come here,” said President Bush before describing Slovenia as a “spectacular, beautiful country.”

The following year a “summit meeting” of a different sort took place in Slovenia. Melania, who was by then living in New York, brought her companion Donald home to meet her parents for the first time. If theirs’ was a storybook romance, the location was perfect: the dreamy Lake Bled area, where a pristine, placid, 350-acre lake lies in the mountains below the medieval Bled Castle (circa 1011) looming high above.

The soon-to-be “Trumps” and Donald’s eventual in-laws dined at the Grand Hotel Toplice which offered them a panoramic view of the castle, the lake and the tiny island in the middle accented by the elegant steeple of the Pilgrimage Church of the Assumption of Mary containing its’ “wishing bell” for tourists to ring. Gondoliers steer tourists aboard non-motorized ferryboats to the island, which is a popular wedding spot. Slovenia was, at one time, part of Yugoslavia, and that country’s President, Josip Broz Tito, vacationed there at Vila Bled, which is now one of the many popular hotels in the lake area which boasts plenty of forests, festivals, hiking, biking, boating and activities, including golf – the preferred pursuit of President Trump.

Ljubljana, Slovenia’s capital, is about 30-minutes’ drive from Lake Bled, and has its’ own international airport, but is also a two-hour drive from Venice airport – making it a nice cultural combination for travelers. Italy and Slovenia both use the Euro as currency and English is widely spoken, plus the roads are good and simply signposted.

Ljubljana’s riverfront city center is closed to vehicular traffic, which gives the little, walk-able city the feeling of an amusement park: inspiring squares and streets teem with shoppers, diners, farmer’s market-goers, and partiers…plus those seeking to take a river cruise or ride the inclinator up to Ljubljana Castle (which adds to the “Disneyesque” feel) for majestic views of the city and the mountains.

The population is 280,000, but the student population of 60,000 gives the historical city, with its’ renaissance, baroque, and art nouveau facades and stylish bridges, plus some remaining socialist style, a youthful feel. The Cubo Hotel, across fromConstitution Square, is cosmopolitan in style and its’ great views of 15th century Ljubljana Castle provide a contrasting view. There’s a small casino, within walking distance, between the Cubo and Chef Janez Bratovz’s “JB Restaurant,” which has been named amongst the world’s top-100.

To arrange a visit to the newest “undiscovered” travel hot spot, log on to www.LuxurySlovenia.eu