Just before Thanksgiving the NBA’s Pistons were might have been more aptly called the “Fistons” in a game against the Lakers in chilly Downtown Detroit. King LeBron James got tangled up with Isaiah Stewart and the result was a royal crack in the pusser of Piston Stewart that left him bloody and swinging his fists in a dramatic, wild rage that lasted well into his removal to the backstage bowels of Little Caesar’s Arena. Everyone else went back their benches to see the Lakes win the game except James and Stewart who were disciplined with suspensions. 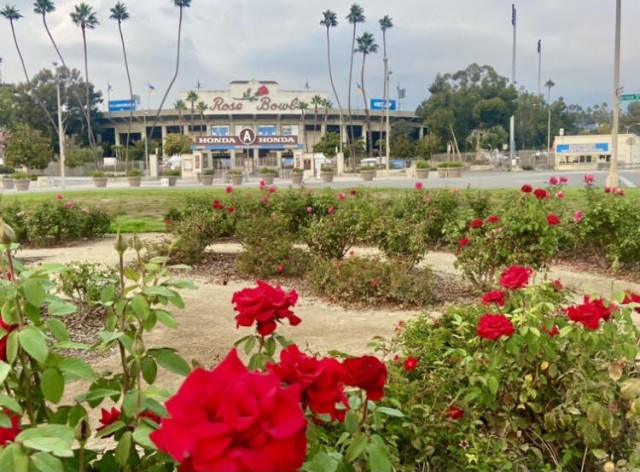 Pasadena’s Rose Bowl is a serene, scenic setting for people to play all day. (Photo by Harrison Shiels)

Three time zones away a week later the Lakers beat the Pistons again a in a chilled-out rematch in LA that featured baskets but not brawling. Ironically Pistons owner Tom Gores’ gleaming glass corporate headquarters is in Beverly Hills, just eight miles – or an hour in LA’s fearsome traffic, from the Lakers Crypto.com Arena.

Maybe the So Cal vibe calmed everybody down, but there have indeed been previously high-profile fights in the star-studded arena. A record crowd of more than 20,000 saw Sugar Mosely box Antonio Margarito and the NHL’s Kings have occasional hockey fights right smack there in LA’s historic, arts, financial, entertainment and sports district.

Soaring over that showbiz scene is the 73-story spire of the iconic InterContinental Hotel Los Angeles Downtown. The hotel’s award-winning general manager Niles Harris loves living and working in the heart of the action – where LA’s other sports venues are also visible from the hotel’s rooftop nightclub and the soon to re-open, 72nd-floor steakhouse La Boucherie, where one can enjoy the spoils of victory with over 1,000 wines; charcuterie atelier; cheese cave; chef’s table and private starlight booths. It’s a sky-high, sweet experience.

Al Michaels, the famed sportscaster who lives in Los Angeles, admitted, while recently calling the hometown Chargers NFL game on NBC, that LA is a spoonful of sugar that helps the…sugar go down.

“It’s not enough to win here though. You have to win with style and pizzaz,” said Michaels from his press box perch in brand new SoFi Stadium, which will host the Super Bowl in early February. (It’s also the home stadium for former Detroit Lion Matthew Stafford, who now lives in LA because he quarterbacks the Rams.)

It was sunshine and roses just across LA in Pasadena for another sportscaster, Michigan football radio broadcaster Jim Brandstatter, who, in 1970 and ’72, went west wearing the Wolverine winged helmet playing in the New Year’s Day Rose Bowl.

“Coming out from cold, dark Michigan I looked around at the beauty and the San Gabriel Mountains and asked, ‘Do people really get to live here?!,’” said the retiring Brandstatter. Years later he would broadcast Michigan’s Rose Bowl win in 1998 to cap an undefeated season that resulted in a national title. Michigan State football’s recent Rose Bowl wins came in 1988 and ‘14.

Even at other times of the year, the Rose Bowl’s scenic setting is fun to visit. You can examine the engraved sidewalk sections saluting the Wolverines and Spartans with bricks bought by supporters. There’s a statue of the legendary late sportscaster Keith Jackson who – “Whoa, Nellie!” – got to live in Los Angeles. Kite-fliers, frisbee-throwers, soccer players, walkers and golfers add to the Rose Bowl area energy, and you’re free to park and join in.

The New Year’s Day Rose Parade is a feast for the eyes, as is Pasadena itself, a bedroom community with a groovy, old-school California vibe near Santa Anita Raceway and Griffith Park. Disneyland, in Anaheim, can feel like a half-day drive, but Pasadena is close enough to get to for the day from all of L.A.’s vibrant areas, including, Santa Monica, Hollywood, Malibu, Beverly Hills, and downtown, which is anchored at its heart by the blinking, beckoning beacon of the InterContinental Los Angeles.