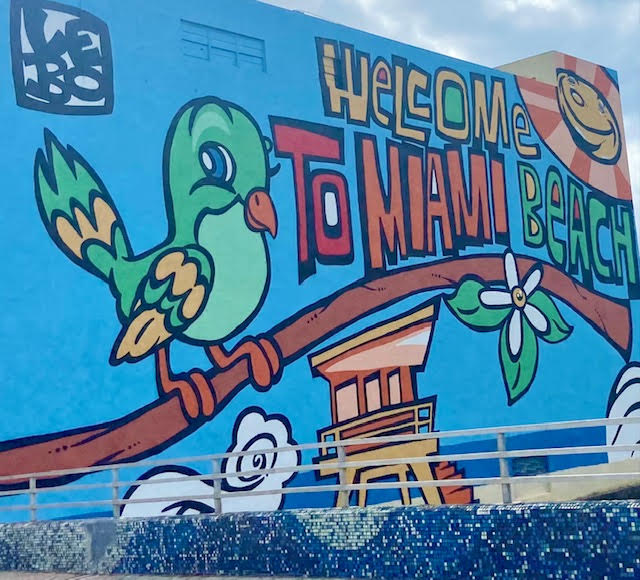 Miami Beach is a mix of sunshine and nightlife with culture and fun. (Photo by Harrison Shiels)

The Wolverine’s New Year’s Eve Orange Bowl college football game in South Florida is also homecoming for Hannah Gelber – a University of Michigan senior whose father happens to be Mayor of Miami Beach (so was her grandfather, by the way.)

“Our house will be bubbling over with Hanna’s friends and sorority sisters. And when Michigan comes to town, they usually bring a really good fan base. We’re excited about that,” said Mayor Dan Gelber, who says he’s supposed to be unbiased, but wife Joan’s mother also attended UM. “It feels a little like I have joined a cult. I have a ton of Michigan garb. We like being parents of a Michigan student because we hear ‘Go Blue’ wherever we go especially down here in Miami where there are a lot of alumni and fans.”

Gelber recalls his first campus visit with his daughter to Ann Arbor. “It’s the only school she ever wanted to go because of its academics, sense of place and spirit. The first time I came in on State Street I saw what I thought was this beautiful, big football stadium. But I came to find out that was the field hockey stadium. Next was yet another big sports stadium. And then when I finally reached the ‘Big House’ I realized what a serious place it was!”

Stephen Ross owns the stadium in which the Orange Bowl is played. Ross is a Wolverine alum and the largest donor in University of Michigan history. “I think Stephen is the happiest guy in the world because his team is coming here,” said Gelber. “At least half of his beautiful stadium will be Michigan fans who’ve traveled here or live here. Miami is ready to embrace the fans. The weather will be beautiful and whether you’re at the game or not we welcome you to our community. You’ll have a great time.”

The stadium, which is also home field for the Ross-owned Miami Dolphins NFL team, is about 30-minutes inland from Miami Beach. What are the Mayor’s Miami Beach travel tips?

“There will be people who go tailgate at the Orange Bowl hours before the game just to tailgate and don’t even go in, so set out early. There will be buses from the different hotels whether you’re at the beach or Wynwood or Coconut Grove where people go out and night,” he said. “In the days before the game we have a beach walk that’s about 7.5 miles long right on the water’s edge. Take a stroll or rent a bike – we have protected bike lanes. Lincoln Road is a great outdoor mall. Take your family to the Everglades and see the alligators.”

Miami Beach Golf Club’s longtime general manager Steve Farrell, who also oversees Normandy Shores Golf Club, is from Kalamazoo. “The Orange Bowl starts with a free concert Dec. 30 the day before the game right on Miami Beach: Harry Styles and Khalid in Lummus Park. They have had the school’s marching bands, too. There are a lot of the activities are here on South Beach,” said Farrell, who invites Michiganders to look him up and play golf. “We have Srixon rentals, so you needn’t travel with golf clubs. The courses have lots of birds and iguanas and wildlife.”