“One of the key components to building a better and stronger Michigan is to continuously promote all the attractions our state has to offer, including our beautiful lakes and great landmarks,” Snyder said. “Michael Patrick Shiels is a great addition and uniquely positioned to be a great asset to the commission.”

Shiels is a travel writer and talk radio and TV host of “Michael Patrick Shiels in the Morning” on the Michigan Talk Network in Lansing. He is also the founder of TravelTattler.com. Shiels has been named the Michigan Association of Broadcasters’ “Network Radio Personality of the Year” four times. He is a member of the Society of American Travel Writers and previously served as a producer for Radio Hall of Fame inductees Dick Purtan and J.P. McCarthy.

Shiels will fill a vacancy left by the resignation of Jim Berryman and serve the remainder of a four-year term expiring Sept. 8, 2014. His appointment is subject to the advice and consent of the Senate. 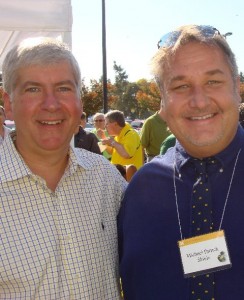