Lt. Commander John Hiltz flew to Traverse City for his first visit last week. But before the 34-year old Notre Dame alum landed at Cherry Captial Airport, he banked his Boeing F/A-18 Hornet over the East Grand Traverse Bay at Mach 1.8 and said “hello” to the guests at Park Place Hotel and everyone milling about downtown at 1,200 miles-per-hour. Hiltz, as you’ve guessed by now, did not arrive via Delta Airlines, but rather as a member of the “Blue Angels,” the U.S. Navy’s famed flight demonstration squadron. The Blue Angels arrived to perform an air show at the National Cherry Festival. Hiltz called the festival “a slice of Americana on Independence Day weekend,” and, upon landing, was presented with a slice of Grand Traverse Pie. He was likely hungry since, instead of stretching out in a first class seat he literally flew his jet fighter up from Pensacola. 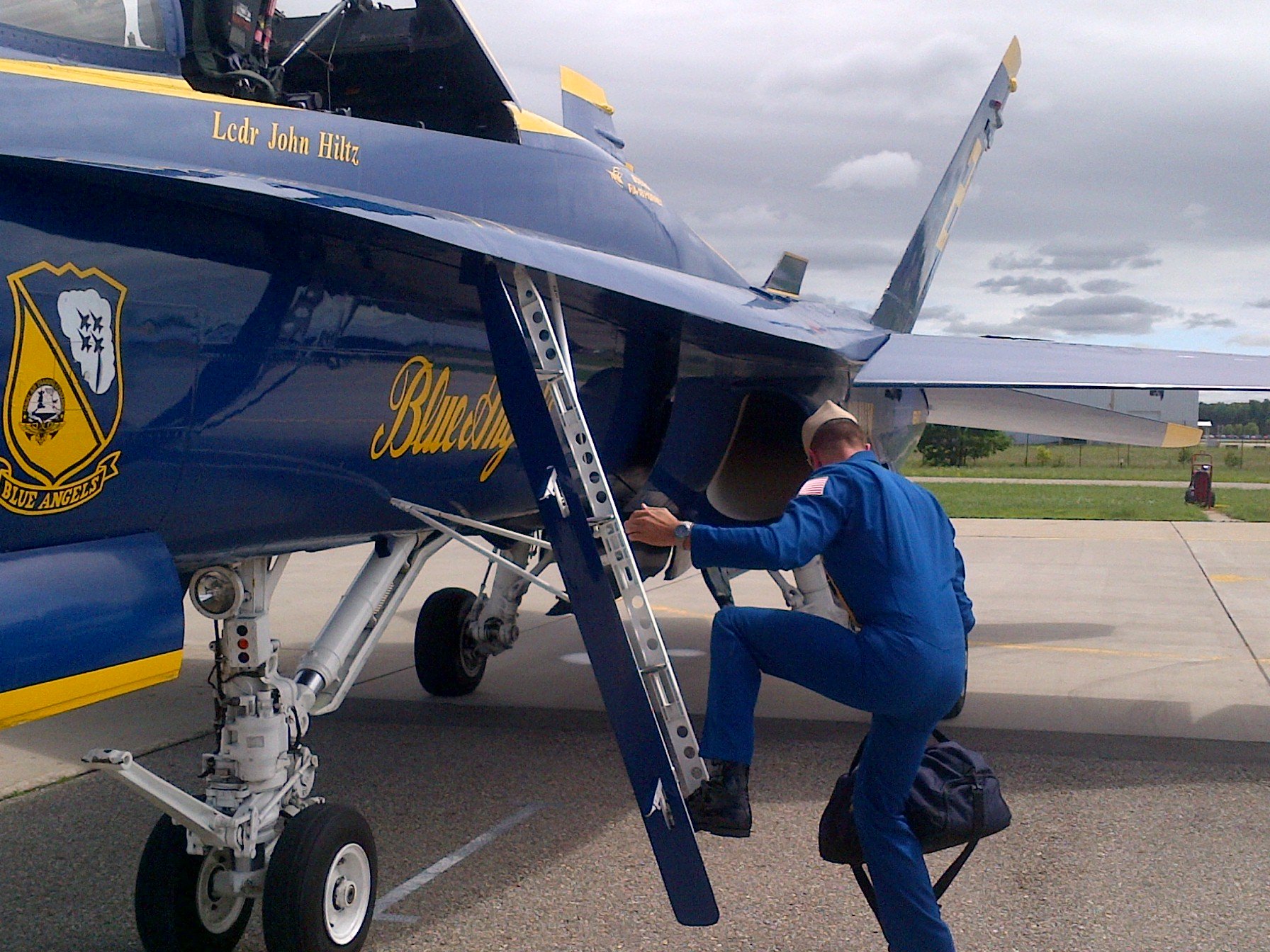 There are no baggage handlers or flight attendants when the Blue Angels fly long distance. (Credit: Harrison Shiels)

Just like the commercial airlines, though, Hiltz can bring one, small carry-on, which is certainly no roller-bag. “There’s just a little spot behind the ejector seat for me to stick a duffel bag.” In the military, comfort is not a priority. “I am not complaining because while I am flying to beautiful Traverse City for an air demonstration we have people flying combat fighters in places like Iraq and Afghanistan,” said Hiltz, who has flown missions overseas from the USS John C. Stennis aircraft carrier as part of Operation Enduring Freedom and will return to the “not so friendly skies” of combat operations after this season with the Blue Angels.

How did Hiltz enjoy his first views of the East Bay and Lake Michigan? “We are so tightly-focused while in-flight that we really don’t get to look around much, but from what I could see, this area is as good as it gets. It’s a pleasure to be here.”

Cherry Capital Airport Director Kevin Klein says sharing the airport for a few days with the Blue Angels takes careful coordination. “We make small adjustments so there is virtually no disruption to the commercial flights in and out of Traverse City. It’s fun because people fly here in airplanes to see the Blue Angels airplanes.”

If you’re dreaming of a supersonic ride in a high-performance Blue Angels jetfighter, search “Blue Angels Media Ride Along” on YouTube.com where you’ll see almost every media person onboard either passes out or loses their lunch!