We were in, I believe, the seventh course of a vogue, 12-course dining experience at Chicago’s acclaimed culinary carnival “Next,” the gourmet follow-up restaurant by celebrity chef Grant Achatz who’d hit the molecular munchie map with“Alinea,”also in the Windy City. Fellow foodie and wine aficionado Jim Cash, of East Lansing, and I, forks in hand, looked at each other with raised eyebrows. We’d booked the expensive table at the perennially sold-out restaurant six months earlier through a stroke of luck, and we were now watching a waiter, on that table, dip a long-stemmed red rose into a cylinder of billowing liquid nitrogen, which caused the flower to freeze forthwith. The waiter then shattered the brittle rose and scattered tiny crumbles of the resulting bitter garnish across two tiny cubes of “food” on our plates.

The look on my face implored: “Whaddaya say we go for a Lou Malnati’s Chicago deep dish pizza after this?” Cash, who founded Revel Wine Cellars, took a sip of syrah and smiled. 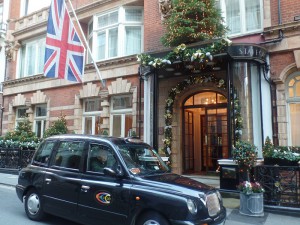 The Stafford’s traditional luxury near Picadilly and Buckingham Palace

When I told the story to Jozef Rogul, head chef at The Lyttleton restaurant in London’s vaunted luxury hotel The Stafford, he said “I believe the culinary world is experiencing a transition. Diners are becoming less interested in food like jellies and foams created with chemicals, stabilizers and powders. They are starting to desire traditional dishes that don’t look like they’ve been played around with. There will always be a place for ‘modern cuisine,’ but many people like to eat something without having to work out what it is first, and that suits us just fine.”

Rogul, who prepared a meal for Her Majesty Queen Elizabeth at The Stafford this autumn, had just finished presenting a gorgeous Christmastime tasting menu which included wild mushroom jelly with truffle foam; Scottish salmon parfait with licorice sauce and seaweed butter; mushroom risotto with Marlborough duck egg and hemp oil; and venison loin. 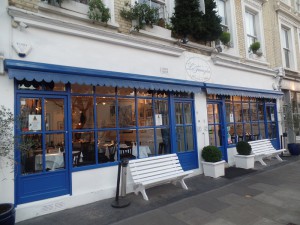 Across London, in Chelsea, Marietta Maccioni operates La Famiglia, a bright, traditional Tuscan restaurant founded by her legendary father, the late chef Alvaro Maccioni. “Modern dishes sometimes are presented on a plate that looks more like finger painting than an entrée. It seems too pretty to eat,” she said with a smile. “And I can’t help but wonder how many people had to touch my food with their fingers to get it to look like that?”

La Famiglia’s “family kitchen feel,” enjoyed often by Princess Diana in her day, presents dazzling dishes simply, such as roast wild boar with rosemary, garlic and olive oil served with Swiss chard (Prince Harry’s regular order, by the way. For what it’s worth, I favored the starkly sinful rigatoni al gorgonzola, which I would fly back over the ocean to eat again.) La Famiglia’s ingredients are so fresh Maccioni insists the sparkling restaurant does not even have a freezer.

Michigan-based travel writer Michael Patrick Shiels may be contacted at InviteYourself@aol.com or via www.TravelTattler.com   His talk show is heard weekday mornings in Lansing on 92.1 FM and seen on Fox 47 TV.