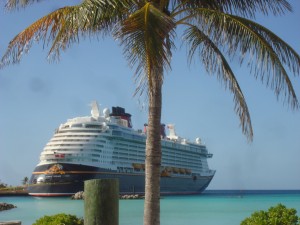 Can you imagine the notion of living and working on vacation with a six-month contract aboard a luxury ocean liner? When Disney Cruise Line sent its’ fanciful new ship named Fantasy on its maiden voyage from Port Canaveral, Florida in April, more than 1,500 housekeepers, waiters, stage performers, chefs, lifeguards, laundry attendants, retail clerks, maintenance people and others and more were on board living out their fantasy of life on the high seas.

“I love it, and you can see why,” said Sammy, who traveled from India to serve drinks at Currents, an elegant poolside bar on an adults-only deck with a sweeping, 13th story view of Fantasy’s stern and the Caribbean Sea. “During our six-month contract we work 12 hours a day, seven days a week, but I love meeting people and talking with them.”

Crew members rotate through a 100-person crew dining room for buffet meals and share a guest room. “My roommate and I work different shifts, so we hardly even see each other,” Sammy said. Crew lodging and meals are provided. Sammy said the crew members aboard the Fantasy also enjoy their own very nice bar and lounge, plus a back deck overlooking Fantasy’s wake.

“We hire people who have that ‘spark of personality’ and then treat them like guests onboard,” Brent Davies, cruise director on the Disney Fantasy, explained. “The crew is very proud of the ship and welcome guests onboard as if it were their own home, which it is, since they live on board.” Davies, an Australian, has been at sea for 13 years having started as a youth program coordinator in the cruise lines “teens-only” facilities. “The average Disney crew member stays three to five years, but some become addicted and make a career of it, like me.”

“Shore leave” for some of the crew means working as lifeguards and servers for seven hours on Castaway Cay, Disney’s idyllic private island, with beaches, snorkeling, sailing and swimming with manta rays in calm, crystal blue water. “How can I complain, I have the warm sun on my face here in paradise while standing in the surf with happy people on vacation,” said a young man from Wales who said he was making $450 per-week and gets two months off between contracts. Disney’s guests on board aren’t the only happy ones. Waiter and waitress Branel, from India and his colleague Jelena, from Croatia, gave diners fun brain-teasing riddles to children in between courses at Animator’s Palette, the ships’ colorful, high-tech, interactive cartoon-themed restaurant. Our smiling cabin attendant Allan, from Thailand, tied clean towels into the shapes of whimsical animals each day and left them on the bed as a surprise during his housekeeping duties. 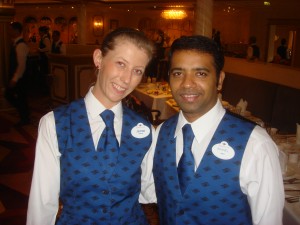 Ozer Balli, Disney Cruise Line’s VP of Hotel Operations says recruiters are honest with crew candidates before they ever get on board. “We paint an honest picture, because it’s a big transition for young people. Six months away from home living and working at sea with 4,000 passengers is a lifestyle not just a job. Once here, though, crew members have the rare experience of working alongside people of 65 different nationalities and the excitement of learning every aspect of the 13-deck vessel.” The crew’s extensive training in Disney’s “Traditions” class ensures guests top-level service quality and fun…with dignity…aboard the Disney Fantasy or any of Disney’s ship.

-Though you might be tempted to lounge on deck and watch the sunset, see the colorful stage shows presented each night in the stylish, expansive Walt Disney Theater on board. Disney Wishes, Aladdin, and Disney Dreams last only 45 minutes and are a marvel of inspiring creativity and performance art.

-Give your teenager space to attend Edge, a supervised, teen-only club that stays open past midnight. Movies, karaoke, trivia games, treats and fun in a high-tech, snazzy environment gives you time to visit the nightclubs and them time to feel special.

-Spend as much time as you can on Castaway Cay, Disney’s private island, during the ship’s stop there. The gangplank usually opens at 9:00 am and the boat departs at 5:00 pm. Your idyllic time ashore there snorkeling, sunning, lying in a hammock, biking, swimming, sailing and more will pass by in a flash.

-If possible, make sure one of your evening dinners is in Animator’s Palette. You’ll be asked to draw a cartoon at the beginning of the dinner…and treated to a delightful surprise at the end! 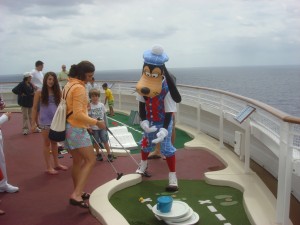 Goofy Golf 13 stories above the biggest water hazard on earth!

-Europa, an adults-only section of nightclubs on board offers exquisitely decorated nightclubs designed to evoke Ireland (O’Gills), London (The Tube), Italy (La Piazza), Paris (Ohh-La-La), and a world lounge (Skyline) where the view magically changes every 15 minutes. Live music and entertainment is offered nightly in various parts of Europa.

-The champagne Sail Away toast, Pirate Party, and Fireworks at Sea are festive events on deck you won’t want to miss. They set Disney Cruise Lines apart from any other.

-Palo and Remy are adults-only, high-end, gourmet restaurants 13 stories up on the back of the ship. They also offer a quiet, elegant, open-air lounge perfect for a cigar and cognac. There are also adults-only sections of the ship for sunbathing, swimming, and cocktails.

-Goofy’s mini-golf on the back of the ship offers a nine-hole course with better panoramic ocean views than Pebble Beach could ever dream of!

One Response to “TAKE A LONG-TERM CRUISE…ON DISNEY FANTASY’S CREW!”