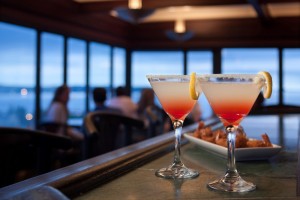 Sitting eleven stories above downtown Traverse City in the Beacon Lounge of the Park Place Hotel on a warm summer night in Northern Michigan, you can peer out the windows over the placid west bay moments after sunset and spot the little white lights atop the boats making their way to the north out of the harbor. The darkening blue surface is as flat as the cabernet in your wine glass, so the cabin cruisers don’t even bob as they leave the tourist town in their gentle wake. One is left to wonder where those at the helm are making for at this hour. Are they taking the freshwater highway up around Northport and down across Lake Michigan to Chicago? Might they endeavor to awaken in the harbor at Mackinac Island or perhaps put in at Harbor Springs? Or are they just going a mile or two up to their bayside cottage after dinner in town? Envy them, sure, but order another drink from your glassed-in perch and revel in the intimate piano performance being put on by Tom Kaufmann who is delighting the room with his talent on the ivories and sincere warmth. He’s had this view every night for 11 years

“Working in such an incredibly beautiful setting is a bonus I never take for granted,” said Kaufmann, who is 59, and learned to play as a boy by sitting beside his mother on her piano bench and singing. “Being behind a piano bar, playing requests, and creating a nice ambiance for conversation and cocktails is how I perform. It’s much more interactive and audience driven. I’m ‘working the room’ more than trying to be the center of attention.”

A din of conversation went respectfully quiet when Kaufmann softly tinkled out the heart-clenching melody “The Way We Were” on the week its’ composer, Marvin Hamlisch, died this August. A feeling of longing was then evoked when he followed with Henry Mancini’s “Moon River.” 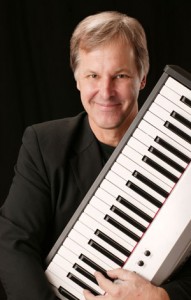 Tom Kauffman Traverse City's musician, sculptor and artist will be appearing at Art Prize in Grand Rapids in September and October.

“As the mood of the room changes, I try to match it, or gently nudge it by playing romantic ballads, and then more up-tempo party songs to keep the energy going,” he explains. “’Sweet Caroline’ ranks up there as the most requested, and I’ve got to play ‘Piano Man’ most nights.” It’s amusing to look directly out at the moon while he plays Van Morrison’s “Moondance.”

In between songs, Kaufmann charms children and brides alike by twisting out the little trademark personalized musical wire sculptures he sells via www.YourNameRingsABell.com. His career changing experience, he believes, will combine both talents. Kaufmann’s Art Prize entry in Grand Rapids, Sept. 10 to Oct. 5, is a giant “Junk Yard Music Box,” a musical sculpture made of recyclable materials. Kaufmann will be there as visitors, who are also Art Prize voters, crank the machine and see the bells and levers make music in the downtown parking lot at the B.O.B. His entry is visible at www.ArtPrize.org