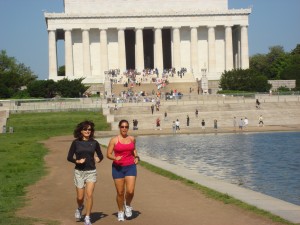 Joggers, walkers and cyclists "on the Mall" in Washington D.C., an open-air museum.

While President and Mrs. Obama will be Washingtonians for the next four years on the heels of his second inaugural, most everyone else – including the U.S. Senators and Representatives – are only visitors to D.C. For the U.S. Presidents, in fact, staying in Washington is like living in your workplace, which is why Camp David, the Presidential retreat in Maryland, was founded for weekend getaways.
The Commanders in Chief even used to have access to their own leisure yacht – The Sequoia – on the Potomac River to get away from the White House. Lansing attorney Kevin O’Malley lists Las Vegas and Washington as his two favorite getaway places. “D.C. is full of electricity. Unlike other cities, the sunlight gets to the street because of the limitation on building heights,” he explains. “The unlimited museums are fabulous.” 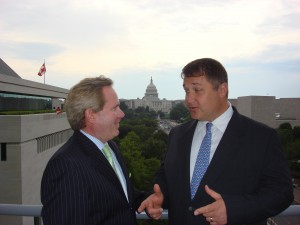 Michael Patrick Shiels with Tim McGuire in front of the Capitol Rotunda.

The “Newseum,” a 600-million dollar pantheon to the Fourth Estate, comes recommended by Rich Wiggins, of Lansing. There you can watch, with the touch of a button, television news clips or newspaper articles covering virtually ever major event in American history. ABC’s George Stephanopoulos hosts his Sunday morning “This Week” political television show live from a tiny studio in the Newsweum. “The Air and Space Museum is especially intriguing,” says Wiggins. “It’s on the Mall, which is a great walk. The Library of Congress is awesome, too, if you care about books.”
Joyce Cusmano lived across from the National Cathedral and used to rent a bike to visit various museums. In fact, the entire town, with its’ striking monuments, is like a museum.
“Museums? Pssssh. Go for the food,” says Shane Broyles, of Okemos. “If you get a chance to do Brunch, do it at Sequoia. Not only is the food amazing, but it’s right on the river with a great view of The Watergate.” 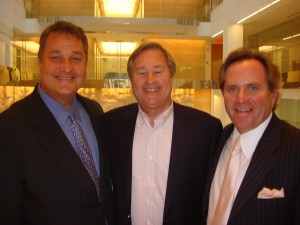 Tim McGuire, of the Michigan Association of Counties, prefers The Palm, a favorite with the Beltway elite and pundits; The Old Ebbitt Grill near the White House; and Finemondo’s country Italian cuisine, though he is not averse to a pint at The Dubliner, an Irish Pub near the Capitol and the train station. Grosse Pointe’s Jill Woodward awards five-stars to the uber-trendy restaurant Lincoln, which pays honor to the past President with the award-winning bio-pic now on the silver screen, through its’ décor. 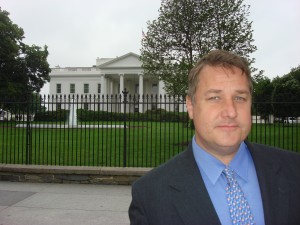 Shiels at the White House.

Michigan State Senator Gretchen Whitmer, of East Lansing, chose to stay at The Willard Hotel during the inaugural. “I convinced my father to bring us,” she joked. But the four-star St. Gregory Hotel and Luxury Suites, a snazzy, boutique hotel directly across M Street NW from the CBS News Bureau, serves as a comfortable base for seeing all of the city’s sites and restaurants. “Performers, heads of state, international delegations, and families of tourists stay with us, and we treat them all the same,” said Hector Torres, the St. Gregory’s amiable VP of Sales and Marketing.