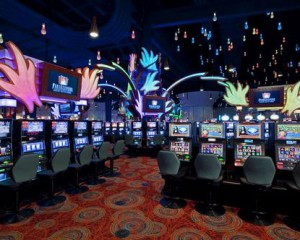 Firekeepers Casino Hotel General Manager Bruce McKee shared his three secrets of success with Jamie Stuck, and they’ve resulted in a national and global award. Stuck is Tribal Vice-Chairperson of the Nottawaseppi Huron Band of the Potawatomi and Firekeepers Development Authority Board Member. He’s been selected to receive an Inaugural Emerging Leaders Program Scholarship at the Global Gaming Expo and Innovation Group’s conference in Las Vegas. Firekeepers Casino Hotel, in Battle Creek, has branded itself as the Midwest casino to “Get Your Vegas On.”

“This exemplary leadership is a key to the past, present and future success of Firekeepers Casino Hotel,” said McKee at a ceremony to honor Stuck and Dorie Rios, Tribal Council Secretary and Development Authority Board Member who was named one of the “Native American 40 under 40” by the National Center for American Indian Enterprise Development Board of Directors.

Stuck, a graduate of Central Michigan University mentioned McKee’s three secrets in his emotional acceptance speech in front of media and supporters during a media conference at Firekeepers Casino Hotel Event Center.

“Timing, capability, and connections,” Stuck said McKee told him. “If you really want to make it, you need to find a way to have all three ingredients. They’re all essential and interconnected.”

For a man involved in the casino business, Stuck said he didn’t believe in luck.

“I believe in preparation and receiving the blessings God gives me,” said Stuck.

FireKeepers Casino Hotel is owned and operated by the Nottawaseppi Huron Band of the Potawatomi.