Last September, our female foursome, dubbed “chicks with sticks,” headed west for a swinging Rocky Mountain getaway. Women may be latecomers to the sport of kings, but we have high standards. A no-frills condo, a fridge full of beer and a Big Mac for dinner are not for us. Along with remarkable golf, we want stylish digs, gourmet meals, massages and martinis. The Fairmont Banff Springs hotel, that legendary Canadian castle in the mountains of Banff National Park, was our unanimous choice. 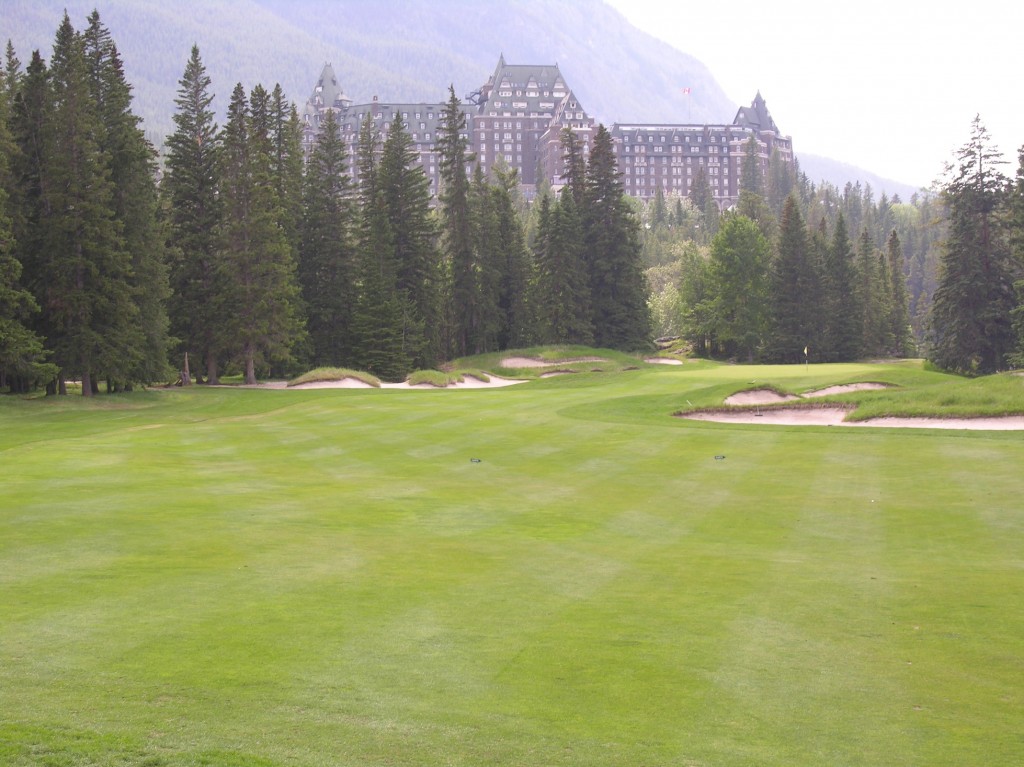 The Castle in the Rockies, Fairmont Banff Springs

“Finest hotel on the North American Continent,” was how the Banff Springs was advertised when its doors first opened in 1888. Awe-stuck by the majestic mountains, William Van Horne, vice-president of the Canadian Pacific Railway, announced, “If we can’t export the scenery, we will import the tourists.” His hotel, modeled after a baronial Scottish castle, was a bastion of luxury for its Victorian guests. When horse packers and surveyors stumbling out of the forest came upon this vision in the wilderness many thought they  were hallucinating.

The awe-factor lives on, especially on the golf course.  Designed by Canada’s foremost architect, the late Stanley Thompson, it has received numerous accolades, including one of the ten best in the world to play. When you play the Banff Springs course you’ll be following in the footsteps of celebrities: Marilyn Monroe took golf lessons while filming The River of No Return with Robert Mitchum; Bob Hope and Bing Crosby have also taken a swing here.

Thompson’s genius was in refusing to impose a course on its setting. Indeed, it’s hard to concentrate on your swing with snow-frosted mountain peaks, azure glacier lakes and elk, bear and geese that have the right of way. 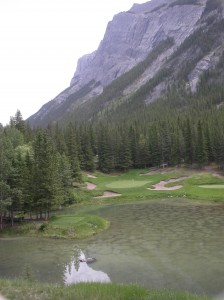 Devil’s Cauldron, the par-three fourth hole best exemplifies Thompson’s mastery of design. Emerging from a pine forest onto elevated tees, one must carry the ball over a boulder-filled glacial lake against a backdrop of mountain peaks.

One of the prerequisites for a “chicks with sticks” getaway is serious pampering. After 18 holes it’s spa time. I decided that a Golf Performance Massage, an exclusive to the Willow Stream Spa, might enhance my game. The combination of kneading, stretching and acupressure, designed to improve flexibility, rotation and balance, is endorsed by teaching pro, David Leadbetter. Afterwards, the indoor Hungarian Kur mineral pool provides the ultimate in relaxation; float on your back with your head in the water and you’ll hear classical music piped from below. Stretched, soaked and stimulated, we were ready for sushi at the Samurai restaurant.

Next morning we were poised to attack SilverTip (named after a rare grizzly bear) in nearby Canmore. Canadian designer Les Furber billed this roller coaster that dips and dives over 600 feet of elevation as “extreme mountain golf.” The slope rating is 140 from the championship tees, one of the toughest in Canada. But there are five sets of tee blocks so golfers of all levels can choose their challenge—from a whopping 7,173yards to 5,053. 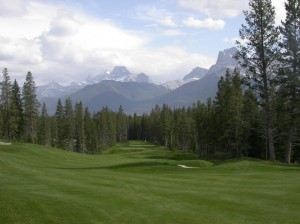 Having conquered extreme mountain golf, we were ready for a gourmet splurge back at the resort’s Banffshire Club where foie gras, rack of Alberta lamb and decadent desserts were expertly paired with vintages from the 65-page wine list. It seemed only fitting to toast William Van Horne’s legacy with a wee dram of single malt.

The next morning the starter at Stewart Creek Golf Club, causally mentioned that, “the cougar was sniffing around here earlier.” How’s that for an attention grabber?

Formerly a coal mining area, Stewart Creek, also in Canmore, offers sensational views of the Three Sisters Mountain peaks. Despite its formidable setting, Canadian architect Gary Browning, succeeded in his goal of creating a course that is playable and challenging from all five sets of tees.  “Too often the forward tees miss the great pleasures of a championship course,” remarked Gary Browning who has succeeded in his intent to “take players breath away. 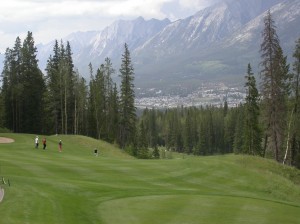 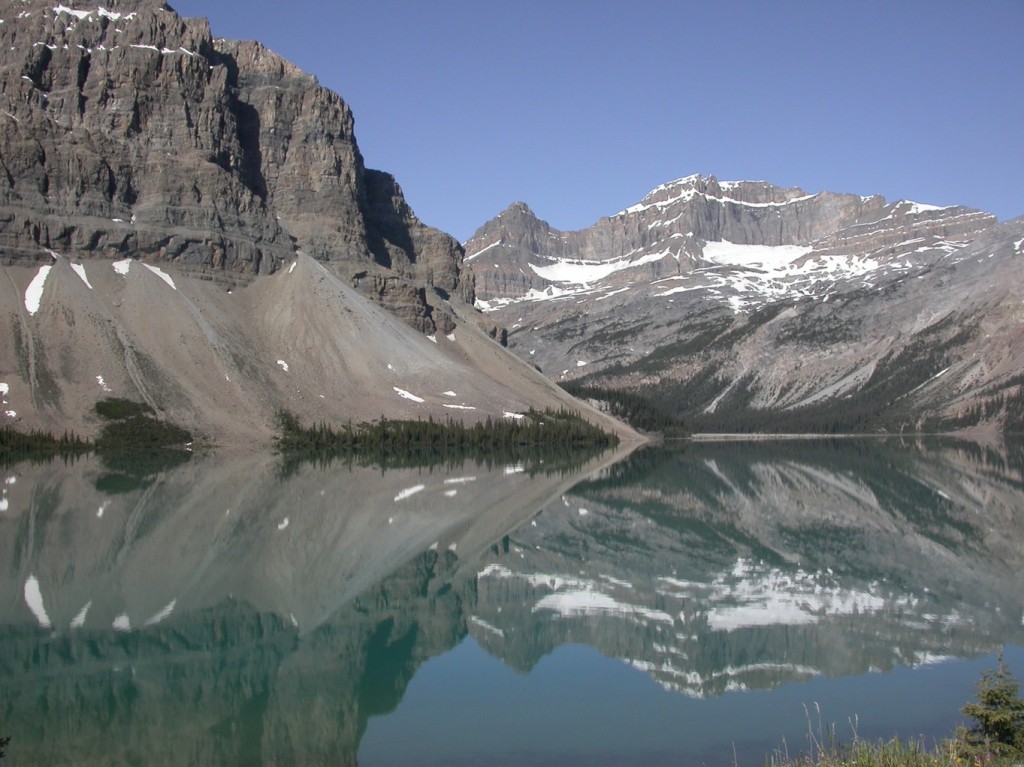 As long as you’re in this neck of the woods, you’ll want to take the 3 1/2-hour drive north along the Icefields Parkway to the Banff Springs’ sister property, The Fairmont Jasper Park Lodge. Mountain goats, elk, ravens, glacier lakes, waterfalls and The Columbia Ice fields are all part of the scenery.

Probably nowhere else in this land is the classic Hollywood image of the great Canadian west better portrayed than here on the 1,000-acre resort on the edge of Lac Beauvert. You can almost picture a Mountie emerging from the forest with a distressed damsel in his arms.

Ideal for a golf group is Jasper’s Milligan Manor cabin, beside the first fairway, with its massive stone fireplace in a central living room/kitchen area and eight ensuite bedrooms. We sat around the fireplace snacking on wine and cheese. Later, in the middle of the night, I was awakened by an elk bugling. The giant male with a full rack of antlers was just outside my window.

The next morning we were primed for The Jasper Park Lodge Golf Club, another Stanley Thompson creation, named Best Golf Resort in Canada by SCOREGolf Magazine and recipient of 4,5 stars from Golf Digest. 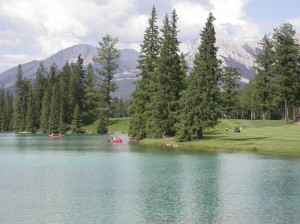 In the summer of 1924 it took 200 men and 50 teams of horses to clear timber and rocks from the golf course site. Thompson’s wit and genius shine from the first tees to the 18th green. He named the par-three 9th hole Cleopatra because of its voluptuous mounds. Every fairway is aligned to frame the Rocky Mountain setting. By the 14th hole we were wondering just how much better it could get when we found ourselves teeing off alongside aquamarine Lac Beauvert.

For our last night, we “chicks” booked a table at The Edith Cavell, the lodge’s fine dining room overlooking Lac Beauvert. From the inventive martini menu we sampled Classic, Cosmopolitan and Chocolate concoctions and began plotting our next getaway. What makes a great golf vacation is not so much your score but the total experience. When you combine scenery that Teddy Roosevelt commented “would bankrupt the English language” with some of the world’s best golf courses, it’s going to be tough to top this one.