Golf, gastronomy and wartime remembrances along the coast of Normandy 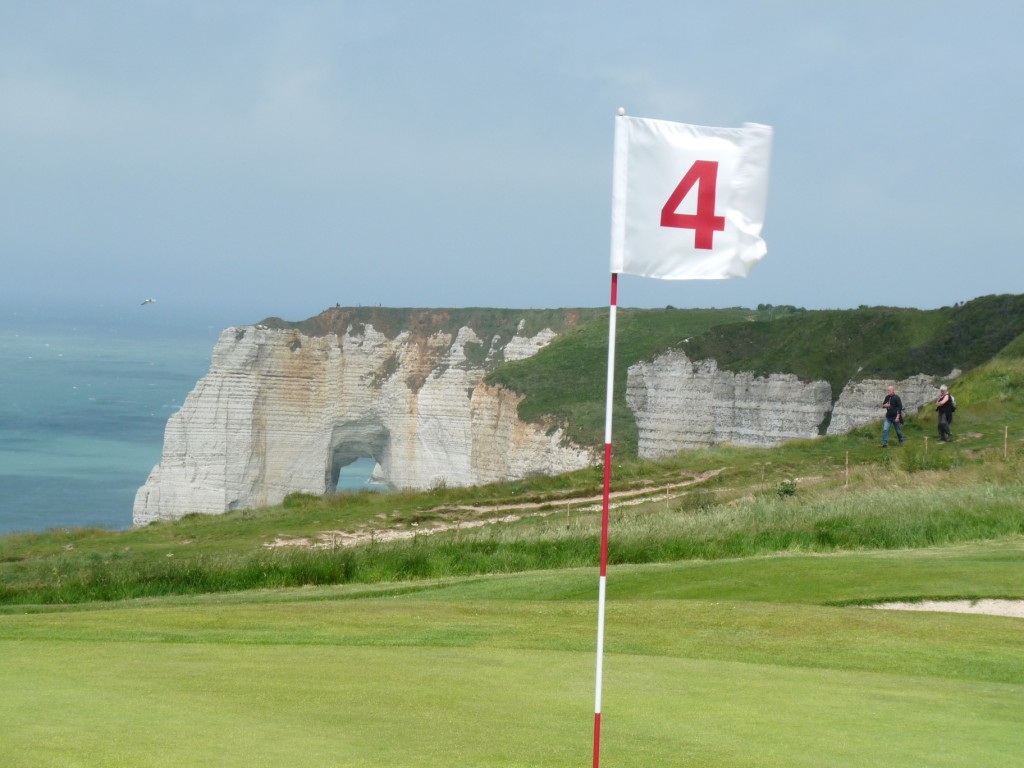 The White Cliffs of Etretat

Most Canadians don’t consider France when looking for a golf getaway.  But you might be surprised to know that France boasts about 600 courses, more than the rest of continental Europe put together. You need not speak French. A green is a green, a slice is a slice, a birdie is a birdie. You’ll find some of the most scenic fairways along the coast of Normandy where you can combine your passion for the game with visits to the D-day Beach memorial sites. And this being France, you’ll never be far from a gastronomic feast.

The White Cliffs of Etretat

I took the train from Paris to Le Havre and rented a car. First stop was the spectacular Golf d’Etretat, established in 1908. From giddying elevated tees on number ten you must launch your ball into the wind gusting from the English Channel to a fairway that leans toward the sea.  From there it’s a climb to the green and a million-dollar view of the chalky white cliffs (France’s equivalent to those of Dover, England) and the church spire in the town of Etretat.

Unlike the North American “conveyor belt” mentality, French golf is an unrushed, civilized affair. Lunch break back in Canada is about as exciting as a burger stop at Wendy’s; in France expect gourmet fare, fine china and crisp linen. At the Etretat clubhouse I tucked into a bowl of mussels steamed in apple cider and savoured the view that inspired the likes of Claude Monet and Victor Hugo. 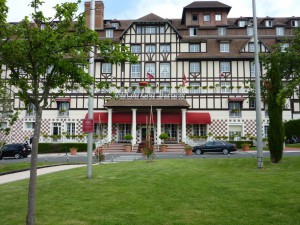 From Etretat it’s a pleasant drive to the posh seaside resort town, Deauville, where Coco Chanel began designing clothes. I checked into the Hôtel du Golf Barrière, a palatial grande dame built in the half-timbered style typical of Normandy.

Two world-class architects, Tom Simpson and Sir Henry Cotton, combined their talents to create Barrière’s 27 fairways—the Red, White and Blue nines. It’s a delightful romp around the countryside with views of Deauville and the English Channel. The 18th is a strong uphill par-four with its green just in front of the hotel’s inviting terrace.

Normandy is not a wine-producing region but its epicurean bounty includes vast quantities of cream and butter, famous cheeses such as Pont-l’Evêque and Camembert and an abundance of seafood, often smothered in rich sauces. This sort of diet calls for a good digestif.  Calvados—Normandy’s apple-perfumed brandy—slides down so well that the Normans often ingest it twice during a heavy meal: halfway through dinner, when it is known as the trou (hole) Normand; and after coffee.

The following morning I took a swing at the Golf Barrière de Saint-Julien, another 27-hole gem in the midst of the rolling Pays d’Auge countryside. Nearby, in the famous cheese town, Pont-L’Evêque, I dropped into the Père Magloire Calvados distillery for a free tour and tasting. 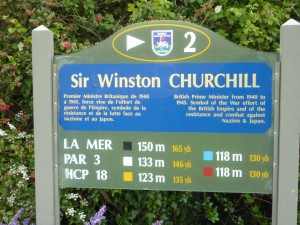 As part of the D-Day 50th anniversary, each hole is named after a war hero or battle. On the Omar Bradley signature sixth of La Mer there’s a genuine German concrete bunker behind the sand bunkers. You won’t forget this par-three set high on the cliffs overlooking the D-Day landing beaches.

On this Normandy coast you’re never far from the sobering reminders of the heroic Canadian, American and British WWII soldiers who stormed the beaches and eventually liberated much of Europe from Nazi Germany.

The Caen Memorial Centre receives about 400,000 visitors per year. Officially opened in 1988, the Centre explores the history of the 20th century with insightful displays and newsreels explaining the events that precipitated World War II.  A wedding dress made of a silk parachute and other artifacts leave poignant memories. Outdoors you can stroll around the American and Canadian Peace gardens.

Nearby, the Juno Beach Centre at Courseulles-sur-Mer is the only Canadian museum on the D-day Beaches. A bit of history: On June 6, 1944. 14,000 of the 135,000 allied troops who landed in Normandy were Canadians. The ten-week campaign resulted in more than 18,000 Canadian casualties; of these, approximately 5,500 were killed and most are buried in the cemeteries at Bény-sur-Mer and Cintheaux.

Up until June 6, 2003 there was no place commemorating Canada’s major contribution. The Juno Beach Centre was created by a group of Canadian Second World War veterans, widows and children of vets to perpetuate the memory and boost awareness of our country’s integral role in achieving peace. It’s easy to find; the local traffic signs incorporate the Canadian flag.

If, like me, you’ve got family who played a part in World War II, you may purchase a brick and have it engraved with the soldier’s rank, name, decorations and whatever other information you’d like to add. The bricks are mounted on the walls of several kiosks located at the entrance to the centre. During WWII, my father, Clifford Draycott, served as a bombardier in the Royal Canadian Air Force. He flew 30 missions and returned home with a bunch of medals and some souvenir shrapnel. My Dad never liked to talk about the war or his involvement but I think he’d be happy to know there’s a brick with his name on it overlooking Juno Beach. 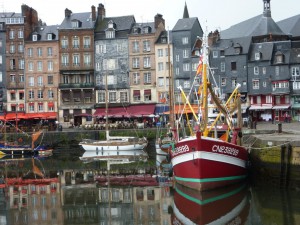 The scenic port of Honfleur

Most North Americans equate Normandy with the D-Day battles and the paintings of the Impressionists. But here are a few things you might also discover while swinging your way along this scenic stretch of France.

*At Giverny, Monet’s well-known and well-painted garden, the artist lived with 2 women and 8 children and was the scandalous talk of the town.

* La Coronne in the centre of Rouen is France’s oldest inn, dating back to 1345. It’s where Julia Child discovered sole meunière and fell in love with French cuisine. It’s also where Joan of Arc was burned alive at the stake.

*In 1608 Samuel de Champlain set sail from Honfleur to discover Montreal. Take a stroll around picturesque town and enjoy a seafood lunch overlooking the harbour at Le Bistro du Port .

* Visit the Dieppe Memorial to learn about Operation Jubilee, the allied raid of August 19, 1942, where many Canadian troops lost their lives.

* Normandy’s most famous spirit is Calvados, made from apples, but Fécamp is home to Bénédictine, the elixir created by a monk.

* Cook a recipe from Claude Monet’s notebook with Régine Boidin in Le Havre.

*Book a room at Hôtel Villa Lara and view the Bayeux tapestry (depicting the battle of William the Conqueror) steps away. 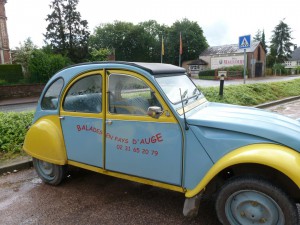 Favourite car of the French