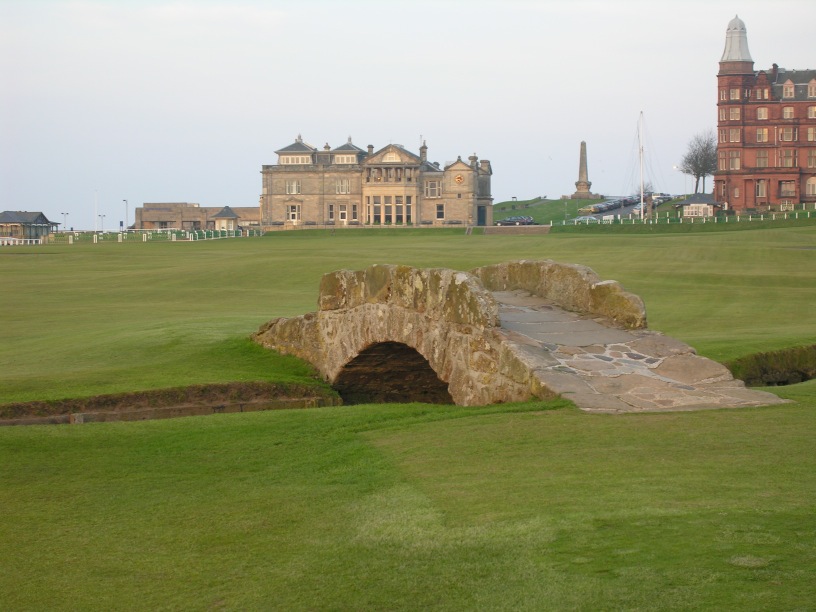 Yikes it’s almost 2014 and I still have not played the Old Course at St.
Andrews.

When I decided to become a golf travel writer I hoped it would afford me the opportunity to play the top courses around the world. So far, I’ve chased dimpled white balls over six continents on some wonderful tracts. But we fanatics are never satisfied. Somewhere on the planet someone is always building a new course that beckons. So here’s my wish “hit” list for 2014.

This new resort differs from most Florida layouts. Yes it has some gators, but no houses, plenty of elevation changes and golfers are encouraged to walk. Think Scottish links in the Sunshine State. What makes Streamsong especially noteworthy is that the two 18-hole tracts have been designed by Tom Doaks and the Crenshaw/Coore team. These legendary architects have created some of the top-rated courses in the world (Bandon Dunes, Cape Kidnappers and Barnbougle…to name a few). Definitely a bucket list contender.

Located on a portion of the privately owned Knapp Ranch near Port Orford, Pacific Gales will add a spectacular new dimension to this remote but world-renowned stretch of the Oregon coastline. Several holes will hug the shore, including both the 9th and 18th, which will share a common cliffside green — unique among American seaside courses. Construction begins in 2014. Now the famed Bandon Dunes will have a worthy neighbor in Southern Oregon.

Home to four of the top five courses in Mexico according to Golf Digest’s current ‘Planet Golf’ rankings, Los Cabos plans to raise the stakes in 2014, when the two best-known figures in the sport, Tiger Woods and Jack Nicklaus, will unveil new creations at Diamante and Quivira, respectively. Diamante’s highly acclaimed Dunes Course by Davis Love III will be joined by El Cardonnal, an inland layout with an “Old California” design motif that will mark the architectural debut of Tiger Woods. In the nearby Pueblo Bonito development, Jack Nicklaus has created Quivira, his sixth design in Los Cabos scheduled to open next summer. I am a huge fan of Jack’s Ocean Course at Cabo del Sol and can’t wait to see if the Golden Bear has outdone himself at Quivira. Making its dazzling debut on New Year’s Eve 2013, the Chileno Bay course by Tom Fazio is yet another jewel in the Cabos golf crown. Three great new reasons to head to sunny Mexico!

No other course in America (or the world, with the exception of St. Andrews in Scotland) has such a fabled past.  Pinehurst Number Two has served as the site of more single golf championships than any course in America.  In 2014, Number Two will take centre stage again, becoming the first to serve as host to the U.S. Open and U.S. Women’s Open Championships in consecutive weeks. (U.S. Open June 12 to 15; the U.S. Women’s Open June 19 to 22.)  Number Two re-opened in April 2011 after an extensive restoration by the acclaimed golf architect design team of Coore & Crenshaw. I played the “before” version; now I want to tackle the “after.”

Gleneagles, “the Palace in the Glenns” will celebrate its 90th anniversary in 2014, which coincides with it also being the site of the 2014 Ryder cup. Golf at Gleneagles is second to none. In fact, it was named “Best Golf Resort in the World” in the 2013 Daily Telegraph Ultratravel Awards. James Braid, five-time winner of The Open, designed the King’s and Queen’s courses and Jack Nicklaus created the PGA Centenary Course (formerly named the Monarch’s) where the cream of European and American golfers will battle it out on Scottish soil for the first time in more than forty years. Nicklaus describes the Centenary Courses as “the finest parcel of land in the world I have ever been given to work with.” The Gleneagles Resort also serves the finest breakfast in the world in my humble opinion. I’d fly to Perthshire just for the creamy oatmeal and Drambuie-laced raspberries and perhaps a flute or two of Champagne. Breakfast of champions!

Set in the towering dunes of Tasmania’s northeast coast, Barnbougle is unlike anything else in the Land of Oz. Designed by American Tom Doak and Australian Mike Clayton, this cliffhanger is said to rival the great links of Scotland and Ireland…but with a distinct Aussie accent. Bring it on, mate.

In the summer of 2012 Canada got its very own authentic links course. Cabot Links, designed by Albertan architect, Rod Whitman, won rave reviews from the world golf community, including the distinction of being named in the TOP 100 Courses in the World by GOLF Magazine. Now to double our pleasure, Bill Coore of the renowned design team Coore & Crenshaw (architects of the newly renovated Pinehurst Number 2 and Bandon Trails among other greats) has already visited Inverness to route the next 18 to be called Cabot Cliffs. Stay tuned.

There’s been a shark sighting near Kelowna. Yes, Greg Norman is designing a new course carved out of rock and forest with spectacular views of Lake Okanagan. I’ve had the pleasure of playing with Ponderosa’s General Manager of Golf, Doug Goubault, in Mayakoba on the Mexican Riviera and at Predator Ridge, also in the Okanagan area. I am hoping to have another play date with Doug this spring.

Golf in the People’s Republic was banned under Chairman Mao’s regime. He deemed it decadent and elitist. Today, the Guinness World Records affirm that Mission Hills, founded in 1994, is the planet’s largest golf club. The World Travel Awards named it  “China’s Leading Golf Resort” for 2012.

I’ve visited Mission Hills three times yet I’ve never had time to play more than two courses. In keeping with my mantra of never doing anything in moderation, I’d like to spend a week binging on all twelve of the Mission Hills courses. Then I’d like to take a quick plane ride over to Mission Hills’ Haikou Resort on Hainan Island and hit the ten courses there. Of course, with all this swinging golf I’ll require multiple massages.

Here’s a confession. I’ve been to St. Andrews several times and I’ve played most of its courses, but The Old Course is still on my bucket list.

Golf is reputed to have been played on the Old Course in St. Andrews since the fifteenth century.  In 1457 James II of Scotland banned the game because it distracted his subjects from archery practice. The first greens keepers were rabbits and sheep. James lifted his ban in 1502 after succumbing to the game himself.

No other course in the Kingdom of Golf holds a candle to the Old because no other starts and finishes before the front terrace of the Royal & Ancient clubhouse where members, ensconced in leather armchairs, sip their single malts and survey the scene on the first tee. Playing the Old will be my chance to tread in the footsteps of Hagan, Jones, Nicklaus and so many more legends, contemplate the Road Hole bunker and pose for posterity on the Swilcan Bridge. It’s enough to raise the hairs on the back of my neck.

After my game, I’ll head to the snug Jigger Inn (circa 1850) for a wee dram and raise a toast to more great golf around the world.