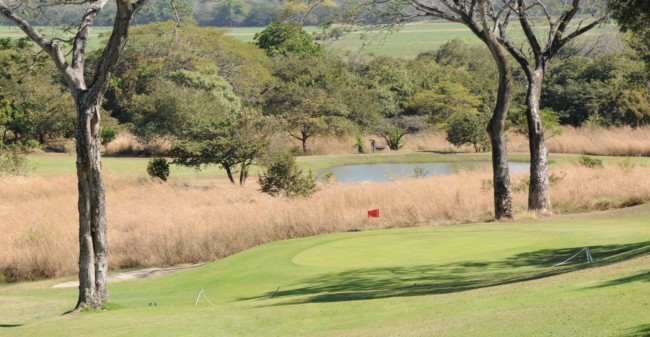 The downhill, par-three second at Papagayo: 103 yards to a tiny green

I have long loved finding a good golf course that’s out-of-the way and little known–a hidden gem. I still get a warm feeling when I think about courses like Strathlene, in Scotland, or Ardglass in Northern Ireland. So I was eager to like the Papagayo Golf and Country Club in the little town of Libertad, Costa Rica.

It qualifies as obscure. It will forever be overshadowed by the Four Seasons Resort at Papagayo, a neighbor in the northwestern quadrant of Costa Rica’s Pacific province of Guanacaste. 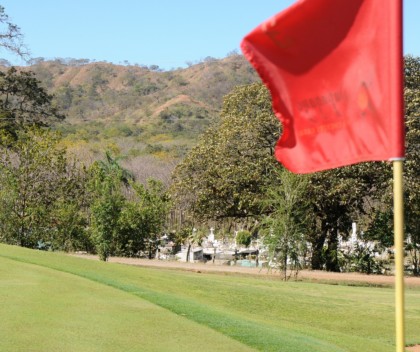 Appropriately, there's a cemetery beyond the third green

And it certainly qualifies as out-of-the-way. As I got into Libertad, my GPS directed me off the pavement and onto a rutted dirt road that took me past small, pastel-colored, concrete Costa Rican houses. Then it told me to turn right onto a much narrower dirt road. Ahead of me, I saw a sign that said, “No Hay Paso,” which is, I think, Spanish for “You’d be a foolish tourist to continue, no matter what your GPS is telling you.”
Being foolish, I continued. Ahead of me, a Costa Rican man drove a dozen cattle into the dirt road, flicking at them with a crop. Behind them, I could see that the road descended to a stream–that ran over the road. I watched as a couple of calves balked at entering the stream, mooing piteously. And I decided that if it wasn’t passable for cattle, I’d better back up.
Fortunately, my trusty GPS regained its bearings, and a couple of dirt roads later, directed me through the gate at Papagayo Golf & C.C. I parked in a nearly empty lot next to an Astroturf putting green and a deserted practice range.
I walked toward the clubhouse and was greeted by a tall young man with a buzz-cut, wearing a tee-shirt, shorts and flip-flops. He introduced himself as David Lee Smith, the professional.
“Good golfer, David?” I asked.
“Learning,” he said. 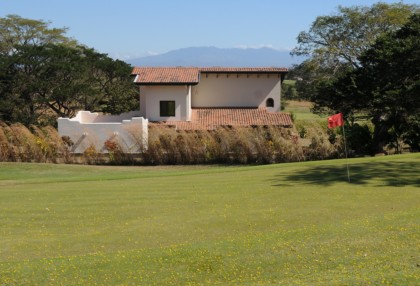 The Costa Rican dream: a winter home behind the green at No. 8

The golf course, he told me, was owned by two Montanans, David Reynolds and Michael Mills. They also designed it. It’s a rustic place on what was recently ranch land,  designed to host North American expats and tourists in nearby resort towns like Playa Coco. According to the scorecard, it played a shade over 6,000 yards. Although the sign on the road said it was “U.S.G.A. Certified,” there was neither rating nor slope on the card.
Smith informed me that my green fee would be $100, including a cart with a cooler of ice and a bottle of water.  It seemed steep for a basic, country golf course that would likely charge about $35 in the United States. But, as Smith pointed out,  the other courses in the immediate area, at the Four Seasons Papagayo, at Reserva Conchal, and at Hacienda Pinilla, charged from $180-225. Golf is a market-driven sport; owners charge what they think the market will bear. Juding from the number of players I saw on my Saturday morning round, the market is telling Papagayo, “No thanks.”
The reasons for the market’s verdict began becoming evident when I got to the first tee. The turf underneath me was a mixed patch of closely mowed grasses and weeds. It was mostly brown. I hit a three-wood into the fairway and it caromed up a slope, suggesting that the ground was hard and getting harder under the Costa Rican sun.  When I set up to pitch to the green, I saw verdant grass for the first time. It looked as if Papagayo spared its water for the putting surfaces–and not much of that. The green was tiny, perhaps 10 paces across, with a few bare patches. 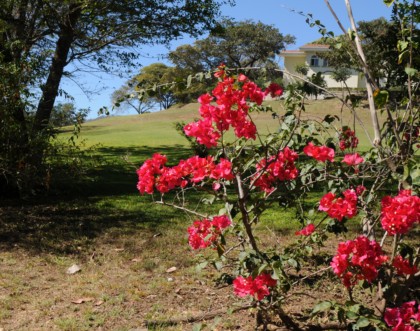 Bouganvillea off the ninth fairway

The third hole made a strong case for the advisability of hiring professionals to design golf courses. Like the first two, it was built on and around the sides of a steep hill. The fairway slopes sharply from left to right. Since the ground is hard, balls that hit the fairway kick right, nto tall grass and scrubby bushes. On top of that, the fairway rises gradually nearly all the way to the green, meaning that the second shot is essentially blind. And the green is roughly the size of the computer screen you’re using to read this. There is a cemetery beyond the third green, and it was difficult to decide which group was having more fun–the people on the golf course or the people in the graveyard.
And so it went. It might have been laughable if it weren’t for that $100 green fee. When a course charges that kind of money, it ought to provide a first-class golf experience. Paqagayo Golf and Country Club doesn’t. I wanted to like it. I just couldn’t.