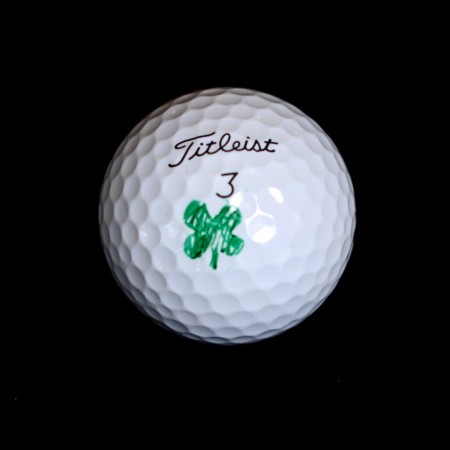 The four-leaf clover on my golf ball. Darren Clarke uses a shamrock to mark his balls, but his has only three leaves. Too bad, Darren.

I have, I must confess, been a bit of a dullard when it comes to the golfing ritual of marking my ball so it will be unique and identifiable. When I opened a sleeve of balls, I took a red Sharpie and put one red dot under the number of the first one, two under the second, and three under the third. When my foursomes tossed balls on the first tee to pick partners for a round, no one picked mine up and said, “Titleist with one red dot–way to mark it, Bob.”

But no more. Thanks to a product called Tin Cup, I am going to upgrade my game this year. My balls are going to have cool four-leaf clovers on them.
This comes about because I was a guest yesterday on Capital Golf Weekly on NewsChannel 8, the Washington area’s answer to Golf Channel. One of the other guests was Cabell Fooshe, the vice president of Tin Cup, which is based in Falls Church, VA.
Tin Cups are stainless steel stencils shaped like half spheres the size of golf balls. They come with a carabiner to attach them to a golf bag and a fine-pointed Sharpie. When you need to mark a ball, you slip it under the tin cup, fill in the stencil and–voila!–your golf ball is marked much more artistically than it was when you used those dots or circles.
The company makes some standard designs–American flags, my four-leaf clover, a martini glass, etc. It will do custom designs.
Cabell gave me one as we left the studio. (This is not to say I will go into the tank for any free merchandise that I might receive, although Titleist and TaylorMade are free to experiment if they wish to.)
I look forward to playing with four-leaf clovers on my golf balls. I expect they will give my playing partners a new target for the usual sarcasm. That can only help the usual object of their derision, my short game.