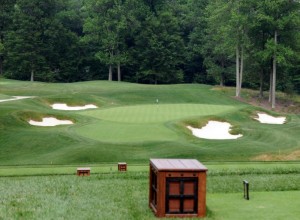 The new 9th at TPC Potomac.

Few golf courses have been as misbegotten and accursed as the Tournament Players Club at Avenel, in Potomac, Maryland.

Deane Beman, the PGA Tour Commissioner back in the 1980s, was its father, though the architect of record was Ed Ault. Beman grew up in the national capital area, and he intended Avenel to be a showcase in his hometown, both for the PGA Tour and for his lasting contribution to the game, the stadium golf course.

Like Pete Dye’s original example of the genre (the Stadium Course in Ponte Vedra Beach, FL) Avenel was designed as a site for professional golf and big crowds. The 9th and 18th greens were set deep in grassy amphitheaters to accommodate spectators. The highest point on the property was a promontory for tents and grandstands from which people could watch the action on all three finishing holes. The fairways were laid through extra-wide corridors so that people could stand ten deep if need be.

There was only one problem. The pros, for the most part, hated it.

Touring golf professionals tend to have hypocritical tastes.  They like their winner’s checks in seven figures, thank you. But they quite often dislike blatant evidence of the commerce required to generate that kind of money. And Avenel flaunted its commercial soul like a hooker in hot-pants, beginning with the McMansions and townhouses that lined many of the holes.

The sniping began almost instantly. Greg Norman, the No. 1 golfer at the time, was asked his opinion of the 9th hole, a mid-iron par three that was flanked by a wooded hillside that could hold thousands of spectators. The hole dropped almost vertically to a green set next to a brook, and Norman thought it was goofy golf.  The architects, he said, “should blow it up and start over.”  Other players muttered about everything from the design to the traffic they had to endure driving from their hotels.

Though the Kemper (and its titular successors, sponsored by FBR and Booz Allen) occasionally produced noteworthy champions, more often than not Avenel identified a Morris Hatalsky, a Bill Glasson, or a Tom Scherrer as the outstanding player of the week. Tiger Woods never played there. The tournament drifted down to the third tier of PGA Tour events, often scheduled right after the U.S. Open, when the top players would almost certainly be taking the week off.  Plans for a course renovation were often rumored, but never actuated. When the tour schedule was abbreviated a few years ago and the Washington stop was relegated to a Fall Finish event, the sponsors backed out. The old Kemper, a fixture on the tour for decades, died.

Woods, who was looking for a tournament he could put his name on, in the manner of Arnold Palmer and Jack Nicklaus, immediately seized on the opening in Washington and engineered a new event, to be played each year around July 4.  But he insisted that his event be at Congressional, not Avenel. Deane Beman’s homely child seemed doomed to perpetual spinsterhood.

The PGA Tour did not buck Woods on the site issue. But it did not want to give up on its property. And it likes to give a boost to veteran players wishing to try their hands at golf course architecture. So, even though its big Washington event was going to be played elsewhere, it invested $30 million in a makeover for Avenel. The course was closed for a year or more while the bulldozers operated. Players like Davis Love III and Billy Mayfair were listed as consultants. The course reopened last year, and will host the 2010 Constellation Energy Senior Players Championship in October.  It’s even got a new name—the TPC  Potomac at Avenel Farms.

But will its new name and its new look be enough to make it loved?

Perhaps. Some of the worst features of the old Avenel have been eliminated. When I walked onto the putting green by No. 1 tee to play an inter-club match recently, I immediately noticed that there was a new 9th green, set into the hillside that once held spectators. No. 9 is still a downhill par three, but it isn’t nearly as drastic as it was. The brook is no longer in play.

“Greg Norman got his wish,” I said to one of my opponents for the day, a TPC member named Doc Keane.

“I only wish Norman was buried under it,” Keane said. (It’s safe to say that if Norman were to unexpectedly decide to play the senior event in October, his welcome from club members would be, at best, tepid.)

The most noticeable alterations begin with that new 9th green. The renovation combined the old 10th and 11th holes, which were a 373-yard par four and a 186-yard par three.  The new 10th is a 560-yard, dogleg left par five. Big hitters will try a long second shot to a narrow green that slopes toward a strip of marshy “environmentally sensitive area” that hugs the entire left side of the hole. Short hitters will have to draw their second shot to fit it into a narrow fairway.

The old 13th was one of the most awkward holes in golf, a 520-yard par five that featured a blind tee shot and no logical landing area for a layup second shot. It was lined by townhouses. In its place are a new, uphill par three, the 12th, and a short sporty par four, the 13th, 360 yards to an elevated green protected by deep front bunkers.   (The housing, alas, is still there, close enough that your nose can still tell whether the neighbors are grilling steak or chicken.)

Other changes will make the course play tougher. A number of greens were raised and protected with deep front bunkers. The spectator areas will be less commodious, and the greens will be harder to hit and hold.  The course, overall, has a vaguely linksy motif, with ragged-edged bunkers framed by shaggy fringes of high fescue grass. 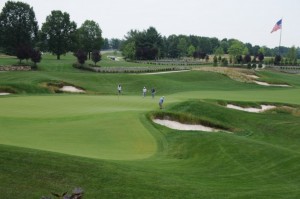 The 18th at TPC Potomac is no longer an amphitheater.

Because the renovation required permits from local environmental authorities, there are changes the players probably won’t like. Where once there were little streams a few yards wide, there are now seven of the aforementioned “environmentally sensitive areas,” much broader than the original creeks. The grass and marshy vegetation inside them is uncut and uneven. A player, even if he can see his ball sitting on firm ground, can’t walk past the green-capped stakes that define the area and hit it. He can’t even walk in and retrieve it. He has to pretend that the ball is lost in a water hazard, take a penalty stroke, and drop a new ball.  “It drives us crazy,” said Keane.

Other changes will probably only be noticed by the poor hackers who play the course on a routine basis. Take, for example, the 6th hole. It used to be a short par five with a creek that ran down the right side of the fairway, then cut in front of the green. The creek has been replaced by an environmental area, and the hole has become a long par four. In a classic display of big-name-player-turned-architect hubris, the renovators placed a pit-like “framing” bunker about thirty yards short of the green on the opposite side of the fairway from the environmental hazard. Pros will be flying iron shots well over this bunker; they’ll barely notice it. But the everyday player will be faced with a fairway wood to the green. He will aim left for fear of fading the ball into the gunch. And he will hit that bunker, leaving himself with a thirty-yard sand shot over a steep lip. The bunker will turn many a potential five into a time-consuming, frustrating seven or eight.

Still, TPC Potomac’s been changed in more than name. And the players on the Champions Tour tend to be a diplomatic bunch, aware that they’re privileged to be playing golf for a living in advanced middle age. A lot of them will genuinely find things to like about the new venue; those who don’t will likely keep their opinions to themselves. The course should be a good fit on the Champions Tour. Like the players, it will be getting a second chance to stay in the game.

(TPC Potomac is private, but not as tough to get on as some clubs. Members of other clubs in the TPC network have access. If you’re not one of them, ask your pro to call and see if he can arrange a tee time. If you don’t have a friendly pro, memberships at TPC Potomac are available, according to the club’s web site. Call and see if you can arrange a get acquainted round.)