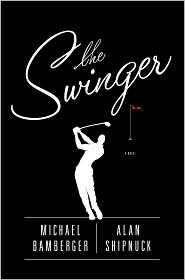 I should dislike The Swinger. I don’t believe in kicking people when they’re down, and this book is a right foot to the testicles of Tiger Woods, who has fallen farther and faster than anyone since Icarus.

But I can’t dislike it. I want to, but I can’t. The shameful truth is that I enjoyed it; I picked it up and read it in one evening. I am as much a sucker for salacious gossip as anyone who thumbs through the National Inquirer in the grocery store checkout line. And this book has salacious gossip like Webster’s Dictionary has words.

The Swinger is a roman a clef by Sports Illustrated writers Alan Shipnuck and Michael Bamberger. By turns shrewd, snarky and sentimental, it gives us at least a plausible inside account of the Woods affair. Although, to be precise, “affair” should be in the plural; the book credits its celebrated central character with exactly 342 of them.

Since it’s fiction, the book purports to be about an astoundingly talented golfer named Herbert X. “Tree” Tremont, Jr. But the authors don’t even bother with the standard legalese about any resemblance, coincidental, yadda, yadda, yadda. If you don’t recognize most of the characters in The Swinger, you probably ought to choose instead a book that recounts everything that’s happened in the world since you started that 40-year sentence in Siberia.

The Woods portrait drawn by Shipnuck and Bamberger strikes me as reasonable, encapsulating both his charm and his cold ego, his phenomenal talents and his self-destructive compulsions. They begin with known aspects of his persona—the stinginess with money, the tendency to call his associates by childish names (“Stevie” and “Steinie”) and the painful leg injuries. They mix in a recognizable cast of associates: the Svengali father, the gorgeous European wife, the two kids, the nasty manager.  They ladle in everything that’s appeared on TMZ about Tiger’s paramours and sex rehab. Then they add a lot of guesswork and extrapolation. I’ve only met Woods a couple of times, but there wasn’t a page in this novel that made me think, “Nope, that couldn’t have happened.”

There’s a fair portion of venom in this. As golf writers, Shipnuck and Bamberger doubtless bear more than one bruise from a cold Woods shoulder, and they’re probably taking a measure of revenge in some of the things they ascribe to Tree Tremont.

But, what the hell. It’s a little bit of karmic payback. Ask Elin. Or Stevie. Or that waitress at the IHOP in Orlando.

A demanding critic might wish that Shipnuck and Bamberger had taken a more time to poke under another rock, the one concealing the reasons why none of Tiger’s misdeeds were even hinted at in the media until Elin took a 5-iron to the back of his SUV and cracked open, in addition to the window, Tiger’s carefully crafted PR façade.

The narrator of The Swinger suggests an answer. He’s Josh Dutra, the golf beat writer for the newspaper in Tree’s Florida home town. He’s middle-aged, divorced, and his credit cards are maxed out. He likes golf and likes the beat and he knows that to hang onto his job, he needs one thing above all else, and that is access to the occasional crumbs Tree tosses to the media. So he approaches a tip on Tree’s dalliances with all the enthusiasm of a cop chasing a lead on the police chief’s brother. His publisher is even less inclined to cast aspersions on Tree; it might not sit well with his friends at the U.S.G.A. and Augusta National.

Predictably, our narrator is co-opted and hired by Tree and his corporate team.  The novel’s climax smells suspiciously like co-option, too. Instead of  finding a true, tragic demise, Tree owns up to the truth, and, in a Pinocchio-like transformation, becomes a real human being, a swell guy and, once again, a great golfer. And they all live happily ever after, even the nasty agent, Finky.

Tiger can only wish for such a neat, happy ending.

So it’s not great literature. But, hey, it’s summer. You’re going to the beach.