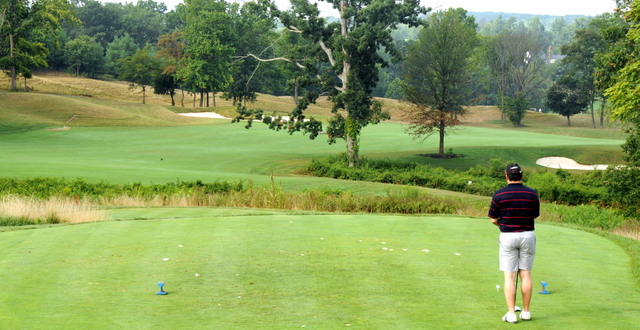 There used to be distilleries in the Maryland hills near the rural village of Ijamsville, 35 miles west of Washington. Back then, making whiskey was a risky and lucrative business.  So it’s appropriate that risk and reward play a major role in the design of one of the capital area’s finest daily-fee  courses, Whiskey Creek.

Set on a the side of a ridge that provides lots of uphill and downhill shots, Whiskey Creek offers golfers excellent turf conditions, imaginative design, and first-class amenities, including free balls on the practice range, an inviting clubhouse dining area, and a friendly staff. But it’s the risk-and-reward holes that make the course memorable. 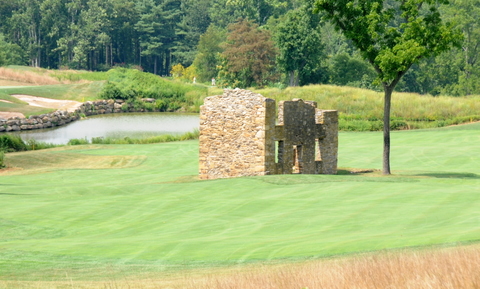 Pick your line around the ruins on No. 18

There are lots of par five holes in the world that feature risk for players who decide to go for the green in two. Par fives that invite gambles off the tee are not so common, but that is precisely the challenge offered by the holes that close each nine at Whiskey Creek.

On No. 9, 510 yards from the back tees, the player looks out over a ravine filled with ball-swallowing vegetation and sees two routes for the tee shot (pictured above). The safe route, to the left of a large, gaunt white oak, has a wide landing area and a backstop in the form of sculpted hillside.  But it’s a three-shot hole from there. The heroic line, to the right of the oak, must carry about 225 acres of gunch and sand to find the fairway. But that line opens up the possibility of reaching the green in two.

There’s a similar choice to be made on the 555-yard 18th, but here the choice is defined by the remains of an old stone house that have been left in the fairway. The line to the left of the ruins has to find a narrow alley of fairway that flirts with the same hazardous ravine that is a feature on No. 9. But the golfer who hits his tee shot long and straight on this line has a chance to reach the green with his next shot. The broader, hazard-free
landing area to the right of the ruins makes the hole into a three-shot par five for all but the longest hitters, and the pitch has to carry a pond before finding the green. 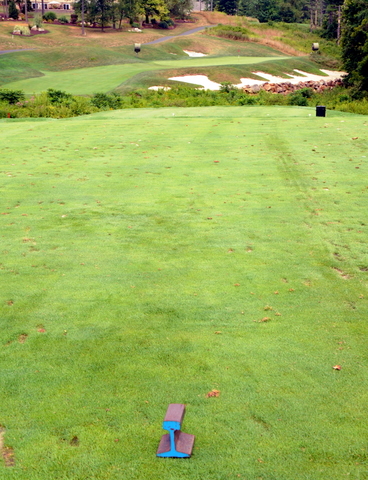 The testing iron shot to the par three 11th

The 11-year-old golf course was designed by J. Michael Poellot in consultation with Ernie Els. The first three holes go up the ridge. The fourth runs along the ridge-top. The tee on the fifth is high enough above the fairway to serve as a launch pad for hang-gliders if the course’s management ever decided to let them on the property. It offers some pretty views over barns and cornfields. There’s another vertiginous tee shot on No. 14, where a hook will find a pond and a slice will find trees. And I particularly liked the par-three 11th, with a medium-iron tee shot to a narrow green set on a slope with sand and a gunch-filled ravine to the right and a nasty, rough-covered hillside to the left. You’ll find out how much you trust your irons on this hole.

That brings up one minor flaw in the course’s design. According to the scorecard, the course plays a shade under 6,000 yards from the white tees and more than 6,500 from the blues. The whites are probably the appropriate tees for most players, but a lot of male egos are not going to permit playing a course less than 6,000 yards long. Assuming that Kemper Sports, which owns and manages the course, isn’t inclined to reset a few white tee boxes to reach the magic 6,000 number, the best solution might be the one suggested to me by the starter—play the blues on the front nine and the whites on the longer back nine.

In the interests of full disclosure I should state that I am friendly with a couple of the course’s original owners. Regardless of that, I like Whiskey Creek. Especially when you can take advantage of one of the discounts offered on its web site, www.whiskeycreekgolf.com, it’s a solid A.