Hitting from the 150-yard white tees at no. 9 on Lake Presidential

No president, as far as I know, has teed it up at Maryland’s Lake Presidential since it opened in 2008, despite the invitation inherent in the name. But the president, who can play pretty much wherever he wants, would find it a worthy challenge. Lake Presidential is one of the best daily fee courses in the Washington area.

The story behind Lake Presidential is a long one. Years ago, Greg Norman did a routing for the property, which lies about 2o miles east of the White House in the Prince George’s County seat of  Upper Marlboro. A stream was dammed to create a 30-acre lake, and the lake was given a name calculated to appeal to home buyers.
It took a long time for some legal and financial complexities to get sorted out. By the time they were, Landmark Land, the developers of Kiawah Island and other properties, controlled the course. The design was completed by its in-house team of architects.
Whoever is ultimately responsible deserves a lot of credit. Lake Presidential is an imaginative and challenging golf course with tremendous variety in its 7,230 yards. It’s tough, too, with a slope of 141 from the tips. The U.S.G.A. picked it for an Open qualifier in 2011, and the course hosted the Maryland women’s amateur the same summer. 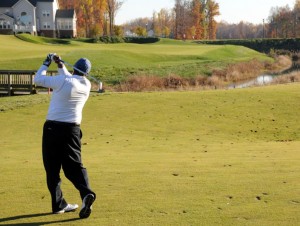 The approach to No. 7, with water on the right

Three of the most memorable holes play around the lake. No. 8 is a 570-yard par five with the lake flanking its right side. The green is build atop a small peninsula that juts into the water. Hitting the green is a challenge from 100 yards. Hitting it with your second shot would make for a career fairway wood.

No. 9 is another lakeside hole, a par three that can play anywhere from 225 to 120 yards. The shot to the green has to carry over the lake and it must not be sliced or pushed, since the lake also guards the right side of the green. But bailing out to the left doesn’t help much, because two pot bunkers wait to swallow up the supposedly safe shot, leaving an explosion to the green with the lake just beyond.
The lake is largely ornamental on No. 18, a closing par five that plays anywhere from 515 to 320 yards. It sits in front of the tee, but the carry is less demanding than it looks—maybe 180 yards from the back tees. The lake might come into play on a long, pulled second shot, but most golfers won’t notice it until their round is over.
Of course, it doesn’t take a genius to build picturesque holes around a lake. The quality of Lake Presidential shines through on some of the imaginative holes on the rest of the course. I liked No. 7, a par four that plays 445 yards from the back. A creek runs along the hole and splits the fairway. On the drive, most players need to stay right of it and on the second shot, they need to stay left. A truly long hitter can try to shorten the hole by blasting a 300-yard shot over the creek and the little cart bridge that crosses it, landing, he hopes, on the second segment of the fairway.
No. 11 is an ingenious, short par four with an uphill tee shot and bunkers in the middle of the line of play. It pays to challenge and carry them, because the green is set on a pedestal and it’s extremely shallow. If you pitch to it with any club longer than a wedge, it’s very hard to hold.

No. 17 is another short par four, with a green tucked in a dell defended by a couple of bunkers and some steep mounding. The second shot brings to mind some Scottish links courses where the best way to hit the green is to miss it and let the ball carom off a slope and roll onto the putting surface. 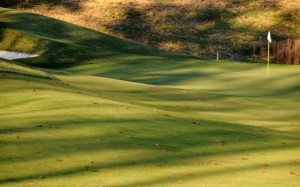 The only hole on the golf course whose design I question is No. 5, a long, dogleg left par four. The tee shot must be placed perfectly on the right side of the fairway, staying short of a creek that crosses about 280 yards out. You can hit the left side of the fairway, but you can’t see the green from there due to a woodland with towering trees that runs along the left side of the hole and impinges on the corner. Hitting the fairway and having to play a long draw to a green you can’t see may not strike most players as fair. But, of course, there is no rule that golf has to be fair.

There’s another element to Lake Presidential that might not be to every player’s taste: housing. When the course opened, there were houses visible on three or four holes. A few years later, they line several more. If the sound of trucks and bulldozers building new streets is any indication, they’ll soon line more.
But, hey. Houses line Pebble Beach, too. Lake Presidential has very reasonable green fees for a course of its caliber—never more than $100 and sometimes lower than half that, depending on the season, the day of the week and the time of day. There’s a range with grass tees and a spacious clubhouse. Using someone’s Palladian window as an aim point for the occasional tee shot isn’t so onerous when it’s part of such a bargain.