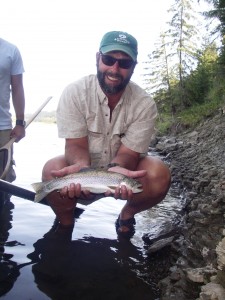 The author with a handsome Bow River rainbow that took a small caddis imitation.

CALGARY, Alberta — The Bow River in Alberta flows 387 miles in a southeasterly direction from its headwaters at Bow Glacier, north of Lake Louise in Banff National Park. In its upper reaches, the Bow has all the trappings of a classic alpine trout stream: conifer-lined banks, gravelly riffles, sweeping backdrops of vertiginous mountains and a slightly off-color tint that suggests cover for lunkers lurking just below the surface.

But appearances can be deceiving. While the upper Bow does hold trout, its icy, glacial-fed waters do not sustain fish in large numbers.

As you drive east from Banff, the Canadian Rockies give way to rolling hills and then prairie. Not long after you leave the mountains, the western edges of Calgary begin to come into view. Once a quiet city on the edge of the plains with once-a-year-notoriety for the world’s largest rodeo, Calgary has nearly tripled in size in the last 40 years to more than a million residents. The surge is due to an oil boom, a Winter Olympics (in 1988) and the increasing appeal of an outdoors-oriented lifestyle that a city like Calgary offers.

The Bow River bifurcates Calgary as it rolls toward its junction with the South Saskatchewan River, ultimately reaching Hudson Bay. Generally, the demands and detritus of a budding metropolis spell the death (or at least the considerable degradation) of a trout stream. But in the case of the Bow, Calgary’s swelling population — and, more specifically, its wastewater treatment needs — have helped create a world-class fishery in the 30 or so miles of river from the city east to the rural town of Carseland. There, wild rainbow and brown trout average nearly 18 inches in length, and browns stretching more than 25 inches are encountered regularly.

In Calgary, it is not inconceivable to hook the trout of a lifetime during your lunch break and be back at the office in time to lead the 2 p.m. work-in-progress update meeting.

The infusion of nutrients into the Bow’s clean, cold water from Calgary’s two wastewater treatment plants — Fish Creek and Bonnybrook — are most responsible for elevating the river to blue-ribbon status. The inflow, from car-wash leftovers to bathroom water, goes through a four-stage treatment process. The effluent that is released back into the river is quite clean, although it has just enough phosphorous and nitrogen to foster a rich aquatic ecosystem. Wastewater spurs on plant growth, which encourages insect growth, which in turn feeds trout.

“The Bow River fishery has grown and improved as the city has grown,” said Brian Meagher, a provincial biologist with Trout Unlimited Canada who works in Calgary. “Residents have come to recognize what we have here, and the fishery has evolved as people have become more conscious of the river and how their actions can impact it.”

The brown and rainbow trout that live in the Bow are not native to the river. Both were introduced in the 1920s; the browns reached the river when a truck carrying 45,000 fingerling broke down near the river before reaching its intended destination, and the driver released them into the Bow rather than see them perish. The success of these introduced species has had its downside. Native westslope cutthroat trout and bull trout have been significantly marginalized in the lower river, although their populations are more stable to the west.

How the trout of the Bow came to be there and how they grew to such large proportions was far from our minds as my fishing partner and I careened toward the boat put-in at McKinnon Flats. We just hoped to find a few.

“The fishing in town can be quite good, especially for the browns,” said our guide, Jason Eggleton of Country Pleasures Fly Fishing, as we strung up our five-weights. “But when it’s off, it’s definitely off, and the last few days’ reports haven’t been good. Today, we’re going to float about 15 miles of what tends to be the most productive stretch.”

The Bow at this point is a large river, from 100 yards across to nearly twice that size. Eggleton instructed us to tie on foam grasshopper patterns, as these juicy terrestrials were beginning to appear with the August heat. Our large flies were also similar to the golden stoneflies that had gotten the trouts’ attention in July. Once such large bugs imprint on the trout’s memory, they’ll continue to take imitations even after the real insects are gone.

(The Bow’s hatches can be quite prolific, and anglers can expect to encounter Pale Morning Duns, tricos, caddis and blue-winged olives, depending on the season.)

On this particular day, the fish were atypically uninterested in our offerings. Eggleton drifted the boat 60 feet from the shoreline — a mix of farmland and stands of pines and hardwood — instructing us to cast as close to the reeds as we could, and to drop the fly in pockets of slightly faster moving water whenever possible.

“They’ll rest in as little as six inches of water,” he said.

I was incredulous until a stroll along the bank later in the day bore out this declaration. I tried to position myself to make a cast without spooking the 20-inch rainbow that Eggleton had spotted finning in the shallows, and promptly found a tree with my backcast. The fish moved slowly toward deeper water before I could re-rig.

As the sun began to fade, we heard loud splashing downstream as we cast to a trout taking small caddisflies in a back eddy. I looked over, expecting to see one of those 25-inch Bow River browns aggressively feeding. Instead, I saw a moose calf struggling to crawl up the bank as its mother looked on.