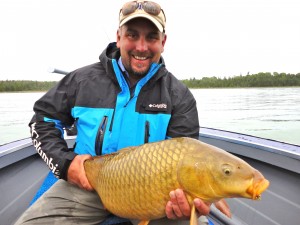 Kirk Deeter holds a fine carp landed on the fly.

Fly fish for carp?  For many anglers, the first response to this question might be “Why?”  For coldwater anglers, carp have long been the fodder of mean-spirited jokes, a species more likely to be pursued with a bow and arrow than a beadhead nymph.  But the fly fishing frame of mind regarding Cyprinius carpio is changing.

Will Rice, an outdoor writer based in Denver, had his moment of “carptharsis” a number of years ago.  “During the spring runoff, trout fishing in the Colorado Rockies is just not happening,” he said.  “One May, a friend and I were eager to wet a line, so we headed east from Denver to fish a reservoir for wiper (a hybrid between striped bass and white bass).  We rented a boat and began zipping around.  At the edges, high water had pushed over the banks into some grass flats.  We took a closer look, and saw all these fish moving around – 10- to 12-pound fish – finning, mudding, even tailing.  They were carp.  We didn’t catch any that day, but it was eye-opening to see fish behaving like this—the way bonefish and permit behave.  Carp are a species you can sight cast to with a fly rod without traveling to the Caribbean.”

Comparisons to bonefish in terms of their similar skittishness and strength have earned carp the moniker “golden ghost.”

Common carp are of the cyprinid family, the largest group of freshwater fish.  Distinguished by large, sometimes golden scales, barbells, a stout profile and a small mouth, carp can grow to over four feet and nearly 100 pounds, though two to three foot specimens between ten and twenty pounds are more commonly encountered in U.S. waters.  Lacking the streamlined shape and the delicate water color patterns of trout, carp aesthetics are an acquired taste for some.  “I think carp are maligned here because they’re not considered classic table fare—though they were brought to North America in the 1800s specifically for that purpose,” said Kirk Deeter, an editor-at-large for Field & Stream and part of a clan of fly fishers that regularly stalk carp in the South Platte River in downtown Denver.  “They are one of the most resilient fish in the world.  They can live in almost any conditions – warm or cold, clean or dirty water – and are readily accessible just about wherever you live.  Go to a local lake or a golf course pond, carp are the fish you’re likely to see.  If you want to sight cast to a tailing fish that might be ten pounds or more, carp are it.

“I like to equate carp fishing with soccer,” Deeter added.  “Around the world, carp is the number one sport fish.  A staggering amount of money is spent on carp angling.  But here in America, it’s just starting to catch on.”

This may be true among casual anglers, but many pros know better.  Ask many guides on the finest trout streams in the American West what they do on their days off, and they will sheepishly admit that they chase carp.  “There’s a pretty common theme for anglers who get excited about carp,” Rice continued.  “They start out fly fishing for trout, and then take a saltwater trip where they catch bonefish and tarpon.  In the course of the saltwater fishing, something clicks about getting bigger fish on the fly.  When they get back home and fish for trout again, that big fish thrill is a little lacking.  Then they discover carp.”

Carp are catholic feeders; they’ll feast on aquatic insects in all life stages, crayfish, baitfish, and even plant matter, such as blackberries.  Anglers shouldn’t mistake the carp’s broad appetite as license for sloppy presentations.  Carp possess highly developed senses of sight, hearing, touch, and smell. This makes them extremely spooky.  A spooked fish emits a pheromone that warns other nearby fish of potential danger.  If you misfire and put one fish off, odds are good that any other fish in the immediate region will go off the bite as well.  “On the South Platte, I believe the fish are mostly eating crawfish, so I rely on crawfish or crab imitations,” Rice continued.  “I use the same crab patterns that I use for permit.  In the end, it’s all about watching the take.  Seeing a nice carp suck up a fly is always a thrill.  When you set the hook, they don’t even know what’s going on; they just continue on their way.  When they do realize that something’s wrong, the water explodes, and they’re gone.  The big ones roll off slowly like an 18-wheeler in low gear.  The smaller fish can melt line off the reel.”

“Before I had a family, fishing meant going to the end of the road and bushwhacking as far back into the woods as I could,” said Chris Wood, President and Chief Executive Officer of the conservation organization Trout Unlimited.  “The further back you go, the fewer people and the better the fishing.  Now, one of my favorite places to go is the C&O Canal in Washington DC.  I take my sons out with me and we fish from the towpath, and we catch some big carp.  When the Texas Mulberry trees are ripe with berries and the berries are dropping in the water, the fish will take them on the surface.  We use mulberry patterns and fish them like dry flies.  If the hatch is on, it’s as exciting as catching bonefish.”