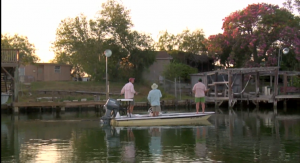 Casting for baby tarpon near Laguna Madre, as captured on The K.T. Diaries.

For a humble print journalist, the phone call from Dallas rang like a Notre Dame bell of opportunity — “We’ve seen your book, and we’d like to have you fly down to Texas and be a guest on The K.T. Diaries.”  A quick Google revealed that The K.T. Diaries is a fly fishing/bird hunting television series syndicated around Texas and Louisiana, hosted by a native Texan named Kevin Townsend.  One of the show’s producers, Erin Gardner, sent along DVDs of previous shows.  Watching an episode on snook fishing in Belize, I was greatly relieved — this was not the kind of fishing show that acted as an endless infomercial for this manufacturer’s engine or that manufacturer’s rod.  What K.T. and the folks at 41 Entertainment are trying to do is give the viewer a “being-there” sense of a few fellows going fishing in an interesting place.  A conversation with K.T. before I departed for South Padre Island laid out the ground rules — come down and fish and have fun.

Like any one who’s watched a fishing show (or any show, for that matter), I was more than a little curious about how many set pieces or ham-it-up moments we’d need to manufacture to make a program.  The answer was, surprisingly few.  After K.T. and his cameraman Federic0 Verardi, introduced themselves in the steaming towel-like air outside the Brownsville Airport, K.T. re-introduced himself on camera.  Then we turned off the cameras and went to buy some cold beer.

The next day, we hit the water early to see if we couldn’t find some baby tarpon.  We were an entourage of two boats — K.T., Captain Eric Glass and myself in one skiff, the cameraman in another.  The filming boat shadowed us by about twenty yards, and near some docks along a river estuary, the tarpon were rolling.  Perhaps because it was so early, I didn’t have the wherewithal to impale myself or Eric with my fly (or otherwise muck up my casting)…and to my great surprise, within a few casts, we had a small tarpon on.  The camera whirred.  We admired the fish, I tried hard not to say “Pretty fish!” as I’d seen one of the bass program commentators say repeatedly over the years, and looked at the camera to venture that this was my first fish in Texas.  CUT!  “Please don’t look or talk at the camera,” K.T. said.  “As far as we’re concerned, the camera isn’t here.”  I looked at the tarpon and said “Pretty fish!” and we went off to chase sea trout.

True to the program’s ethos, the rest of the day (and the next) were a lot more like fishing with a new friend than making a TV show.  The fishing was fantastic, as we found tailing specks (speckled trout) feeding on crabs and shrimp stirred up by sting rays on nearly every flat we visited; at one point, a ray swam right under Federico’s boat, providing some incredible footage as the trout followed.  I had to be admonished on several occasions not to look at the camera, but for the most part, was a good guest/sidekick.  My most heroic moment came when a good-sized sea trout swam by K.T. as were were wading and his cast landed behind;  a lucky backhand cast of mine fooled the fish, and the final footage seemed to suggest that I had pickpocketed my host (probably just a bit of Texas hospitality on K.T.’s part).   Thanks to Erin’s considerate editing, my many muffed deliveries for redfish (“Cast to the OTHER left!”) remained on the cutting room floor.  I came off as a somewhat competent, mostly amiable (if slightly balding and paunchy) angler.  And as an added bonus, the footage of my mangling my Backpacker guitar singling “Used to be Trout” also made the cut.  I’m guessing the big phone call from the record producer in Austin will be coming in any day.