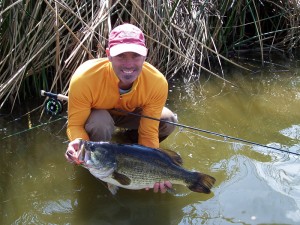 Conway Bowman, posing with a bass -- somewhat more benign than the makos he pursues off the coast of San Diego.

As the first of the many makos we’d see over two days snuggled up against our chum bucket, I couldn’t prevent the heavy metal standard “Iron Man” from penetrating my thoughts.  Not because the sight of these blue black predators circling our boat summons a dystopian vision of mayhem, but because Conway Bowman and I had been discussing Dark Globe, the band he used to play drums for, and his predilection for Black Sabbath.  A few sharks later in the day, Conway gamely joins in on the chorus of The Band’s “The Weight” which blares over a set of speakers wired to the boat’s center console, courtesy of shark guide in training Jared Lane’s iPod:

Take a load off Fanny,

And you can put the load right on me

On this day, Bowman does not seem burdened by any loads; in fact, he’s flying high, and with good reason: there’s a new TV project close to getting green-lighted; a documentary film (Speed, Muscle and Teeth) nearly ready for release; an endorsement deal from a major outdoor clothing manufacturer; and a recently arrived son, Maximillian, with his wife of five years, Michelle.

Bowman’s catholic musical tastes speak to a multi-faceted, idiosyncratic persona.  A native San Diegan, Bowman has a surfer aura about him – flared jeans, a graying soul patch, piercing blue eyes and brief forays into longboard patois.  Yet bookended by the occasional “dude,” you’ll hear an in-depth discourse on the lifecycle of mako sharks and a thoughtful and heartfelt case for the fish’s protection.  (Bowman is a surfer, by the way, and his frequent trips to the break at Cardiff Reef, just north of La Jolla, help explain his lean and muscular physique.)   Conway’s father John began his adult life as a stage actor, but finding that livelihood too remuneratively inconsistent to provide for a family, became a high school literature professor.  He stayed active in community theater, and that helped make the Bowman home a flourishing cultural center—which, in conservative San Diego, meant a freak show.  “I remember holiday dinners with a roomful of artsy types doing skits before and after the meal, and generally carrying on,” Conway recalled, as he squeezed a bit of menhaden oil onto the yellowtail jack carcasses in the chum bucket.  “We were definitely the weird family in the neighborhood.”

John Bowman’s teaching schedule allowed for extended summer road trips, many of which led to the trout streams of Idaho.  Conway frequently accompanied his dad and caught the fly fishing bug, but found few freshwater opportunities available once he returned south.  In the early nineties, he discovered saltwater fly fishing, and soon learned that sharks were among the most plentiful sport fish off the coast of southern California.   “I bought a 17’ aluminum skiff with a 25 horse tiller-controlled motor and a a compass and hand-held radio,” Conway explained.  I would run that skiff so far out that I couldn’t see  land! There were some dicey times when the fog would roll in and I was 10 miles out to sea but I made it back and look at those times as not stupid moves, but valued learning experiences.  The first time I went fly-fishing for sharks, I conned one of my buddies, Mike Seim (now a we’ll respected guide in Montana) to venture out with me.  We set the slick and by the end of the day we were surrounded by at least 25 blue sharks ranging from 4 to 8 feet long. At that point I realized that I was on to something fly-rodding for sharks.  But it took me two years to catch my first mako on the fly.”

John Bowman, incidentally, has shown no interest in casting to makos.

It’s the makos that have catapulted Conway Bowman to fly rod celebrity—which has all the gravitas in the non-fly fishing world of having once been sent to fetch coffee for Leo DiCaprio or Henry Paulson.  For a time, Conway co-hosted ESPN’s “In Search of Fly Waters,” and has been featured on a number of other outdoors programs and in such august publications as the New York Times.  Though the makos proved elusive to bring to hand in the early days, 15 years later, it’s a different story.  “If I can draw a mako near the boat, we’re almost certain to hook them,” Conway said, not boasting but stating fact.  ““They’re not shy; when they turn on, they’re like a heat-seeking missile.”  This was certainly my experience; of the 13 makos that showed up during my visit, 12 – ranging from 80 to 120 pounds – were landed and gently released…or as gently as is possible with a writhing mouthful of long and sharp teeth 3 feet of 86 pound test steel leader away.  (Barbless hooks and a home-made catch & release tool facilitate the process.)  The 13th – a larger fish that Conway estimated to be between 150 and 175 pounds – leaped three times in rapid succession to heights reaching nearly ten feet, and sliced through the leader with its rough skin.

Conway’s upbringing may have inspired his eclectic angling choices.  It also seems to have fostered a level of pragmatism that helps keep mako fishing fresh.  He’s held down a day job with the city of San Diego’s Public Utilities Department since he was 17, and now – 27 years later – he’s a watershed manager for a 300 square mile parcel of land in northern San Diego County.  (Conway’s close friends refer to the spread as “The Ranch.”)  “My day to day duties vary from managing farmers’ water usage to doing  habitat restoration  and even performing  micrometer readings on the Hodges  Dam.  It’s a great job for someone who can’t stand to sit in an office and deal with a normal 9 to 5. My days usually start at 4am and I’m off the clock by 2 pm.”  It doesn’t hurt that Lake Hodges offers excellent largemouth bass fishing, and that tailing carp can also be found in the greater watershed…and that if the sharks call, Conway can shift his day activities to the evening.

There is a sense of bravado in big-game fishing, and the audacity to chase mako sharks with a fly rod only ups the ante.  Yet Conway’s eagerness to have his clients stick a shark is balanced by a great admiration and respect for these animals – and a desire to cease their senseless slaughter by “sportsmen.”  To this end, he’s launched Flying Mako, a catch and release fly fishing tournament where proceeds go toward shark conservation efforts.  He’s also tried to persuade by example.

“I got to know a commercial fisherman who caught and killed a lot of sharks with a handline,” Conway recalled.  “I think he thought I was one step above the village idiot, casting to them with a fly rod.  One time we were fishing pretty close by each other, and I hooked a shark.  It nearly jumped into his boat.  He came over afterwards and said, ‘Boy I thought I fished light tackle!’  We moored our boats at the same marina, and he’d come over some days and ask how I did.  When he decided that I wasn’t a threat to what he was doing, he began to share hints about where to find the sharks on certain tides.  It really helped things comes together for me.

“I changed marinas and didn’t see him for a number of years, and then I ran into him.  He told me that he’d gotten out of commercial fishing – killing makos just started to feel weird.  ‘I want to do what you do – take people out to catch makos so they can see what a great adversary they are, then put them back.’   After his first trip, he stopped by my house to tell me about his day.  ‘I had two kids and a dad, and we released ten makos. I apologized to every fish before I let it go for all the sharks I killed.  Seeing the look on those kid’s faces when we got the sharks up to the boat — I’ve never had a better day on the water in my life.’”

(A version of this story originally appeared in Fly Fishing Journal.)