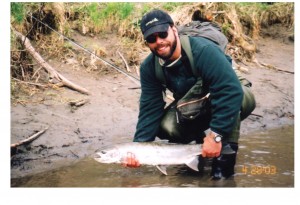 The author, on a happier steelheading occasion.

Having recently moved to Oregon and been bitten by the steelhead bug – and having a friend in the fishing travel business who regaled me with tales of the chrome monsters lurking in the famed Bulkley – I decided to make the trek north.  A spendy B.C. lodge was out of the question on my budget, but a tent wouldn’t do either, as my wife and 18 month-old daughter (and the wife and two young children of my fishing companion Peter) would be in tow.  The same friend had assured us that the Bulkley’s hub town – Smithers – would be great fun for the families, and that the most comfortable and economical way to do the trip would be to rent a house on the river that was owned by an area lodge operator…and that there was lots of access for do-it-yourselfers.

It should be noted here that said friend stayed at a spendy lodge, had no children at the time, has a wife who’s an excellent angler and fished with guides.  I knew all this at the time, but was careful to not let such knowledge interfere with my bad judgment.

We started our trek north with a two-day stopover in Vancouver, a delightful cosmopolitan city; our brief habitation here was by far the smartest thing Peter and I managed in our plan.  (The second smartest was an overnight here on the sojourn south.)  Early on the third morning, with memories of our ambles in Stanley Park still fresh in mind, we began the 12-hour drive north in Pete’s new Honda Odyssey; the families would fly up that evening (the only other smart facet of our plan).  As we left the suburbs, an LED sign on the highway warned us to “Beware of Wildlifes.”  We chortled at the misplaced plural, though did not discount the possibility that the grizzlies, elk, wolves, etc. would be so plentiful that the “s” might be justified.  We passed through towns surprisingly devoid of charm – Williams Lake, Quesnel, Prince George – marking our progress with coffee/meal stops at Tim Hortons (a cross between Dunkin Donuts and Dennys, and a culinary mainstay in this part of the world).  After Prince George, we veered northwest for the last 150 miles (or so) of our journey.  As the last light leaked from the sky near Vanderhoof, the clouds gave way to light rain.  By Houston, with its statue of the largest fly rod in the world, the rain was falling in earnest.  We couldn’t make out the shade of the little Bulkley near its junction with the Morice (a much larger river; by all rights the Bulkley should be called the Morice) in the darkness.  This, in retrospect, was a small blessing, as we had at least one night of hopeful steelhead dreams.

When we woke the next morning, the rain had mostly stopped, but the damage had been done–the Bulkley flowed a dismal gray, like washing machine outflow after a very dirty load of laundry.  We decided a trip to town was in order to show our families it’s many child-friendly amenities, and to get a bit of local angling knowledge. We soon learned that Smithers was undergoing a major public works project – the main artery had been scarped down to the dirt, traffic was reduced to one lane, and many adjoining sidewalks were blocked with large sewer pipes.  Traversing the pipes, we eventually found a sporting goods store with a fly fishing section.  When I asked a store employee which dry fly he liked to use on the Bulkley – after all, it was famed for its surface-seeking steelhead – he seemed to staunch a guffaw and pointed instead to an assortment of long black leeches…the kind of thing we’d use at home in the winter.  When I asked about access, he asked if we had guides…and when I said no, he said it was pretty limited, and point out a few spots on a map he sold us.  “Most of the guys on their own put in and float,” he added.  “You guys have boats?”

They were safe at home.

But Gunter, our host, did have a few pontoon boats that he was happy to rent us for the week, and the fee was just a little more than buying a boat of our own.  Gunter was a curious character, a burly Austrian who closely resembled my vision of a “burgher” except instead of wearing lederhosen, he favored a t-shirt promoting his lodge that he wore everyday and that didn’t quite cover his rotund tummy.  He was obviously a festive soul, as a banner reading “Happy Birthday Helga” still hung in the house’s mudroom off the garage.  It turned out that the grounds of our rental home were the nerve center of what he called his “Mobile Unit” – an RV/boat combination that allowed him to take salmon-seeking clients where the action was on the Lower Skeena and beyond.  Gunter was officious in his manner, and suspect of his clients’ angling ability.  “I had three guys from Norway on the Skeena salmon fishing,” he explained shortly after our first meeting.  “They said, ‘There are no fish here.’  I grabbed the rod and cast out and caught a 30 pounder, one cast.”  So there.  Once we had our boats, we had to figure out how to get them down to the river, as the bank was quite steep.  Given Gunter’s general ambivalence toward guest fishermen, I wagered Peter a beer that if we asked him how to get the boats down, he would tell us to jump in them and slide down.

“How do you get the boats down to the river?”

“Get in and slide down!”

As we were roping them down the cliff, he added, “Fish the bends!”

For the next five days, we fished the bends, the riffles and the runs of the eight or so miles between Gunter’s house and the highway bridge just east of downtown—the last take-out before the canyon section of the Bulkley, home, we learned (later) to many of the river’s most famous runs, and pretty much out of the question for day-trippers on their own.  As the week passed, the water cleared a wee bit, going from the dirty laundry outflow shade to the color of glacial till.  Part of the problem, we realized, was the abundance of pink salmon flesh in the system.  After every third swing of our leeches, it was necessary to clean the hook of salmon gook.  And if we weren’t hooking fish matter, we were getting tangled up with the millions of cottonwood leaves drifting toward Mother Skeena.  Beyond flesh, flotsam and one small bull trout, we found nothing.  Not a tug.

By our third day of floating what we came to think of as our “home water,” we began to see a few other anglers flogging away.  They shared that a few of the other venerable Skeena tributaries – the Copper, the Kispiox and the Babine – were running fairly clear, and people were finding a few fish.  Had we considered going over there?  “Over there” meant a few hours drive—no problem for Peter and I, who were used to driving a few hours each way to the Deschutes for half a day’s fishing.  But four extra hours of driving meant four more hours away from our families.

Each early evening when we returned to the house above the Bulkley, our wives greeted us with eyes that shone with a mix of derision and desperation – the former, a function of our fine plan to strand them some eight miles south of nowhere; the latter, a direct correlation to being stranded with three toddlers, very few toys and no town diversions beyond a public pool/water park with limited family hours and the pleasure of dropping off our shuttle vehicle – an ancient pick-up truck whose use came with the house – at the aforementioned bridge.  Had there been somewhere to go, I have no doubt our saintly spouses would’ve thrust the children into our casting-soar arms and gone.  As there wasn’t, they merely opened a bottle of wine and glowered at us across the table, expressing little sympathy for the off-color water, the salmon gook and the opportunity denied of driving to the Babine, Copper, etc…though in the spirit of full disclosure, I should say that neither Peter nor I had the guts to even float the “driving to other rivers” notion, given the current circumstances.

It’s worth noting that in the seven years since our fateful trip to Smithers, my wife has not once expressed an interest in returning.  In fact, I don’t believe that’s she ever mentioned it.

On our fourth day of flogging, it happened.  We were at a promising looking riffle about midway though the float.  I took a spot near the head, and Peter positioned himself 100 yards downstream.  I flipped a purple leech about 30 feet out, and mid-way through the swing came THE PULL.  I yelped and backed up onto the gravel bar to dig in for what would certainly be an epic struggle – me versus the iconic Bulkley steelhead.  I waited for line to scream from the reel, but it didn’t so much as murmur.  The fish was still there, just not doing a damn thing.  I began reeling and it dutifully swam in.  With ten feet of line outside the rod tip, the fish came in view – it was seven or eight pounds, moderately bright – nothing remarkable.  At this point, it didn’t begin to fight so much as thrash about, shaking its head.  Before Peter could scramble up the bar to see this marvel, our first B.C. steelhead, it shook itself free and drifted back into the murk.  Few events in my fishing life have been so anticlimactic.

The next day – our last on the river – Peter took the slot at the head of the very same riffle, flipped a purple leech out and yelped.  Another hook-up!  After waiting for a searing run that was never to come, Pete reeled the fish in, saw that it was about eight pounds, and parted company with it not far from his feet when the fish began shaking its head.

To this day, I’m convinced that it was the same fish, for all I know, the only steelhead that entered the Bulkley in the fall of 2001.

(A version of this story appeared in The Flyfishing Journal.)