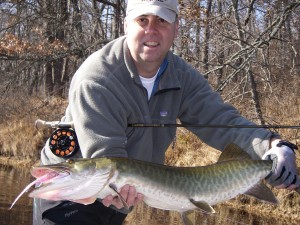 Every few years, a new sport fish emerges as the “it” species for fly fishers to target, a creature that was previously unknown to fly anglers.  The list has recently included taimen, golden dorado and mahseer.  Though worthy of angler attention, these quarry require lengthy journeys to faraway lands –Mongolia, Bolivia and India, respectively.

Fly anglers in the upper Midwest – and around the country – have discovered a new species that anglers with conventional gear have long targeted:  muskellunge…largely thanks to the obsessions and writings of an angler named Robert Tomes.

“Up in northern Wisconsin, everything is about muskies,” Tomes said.  “It’s not only the topic of all angling conversations, but it’s the dominant commercial icon – there are muskie bars, muskie tackle shops, muskie motels – it can’t be escaped.”  (In the town of Hayward, one can visit the National Freshwater Fishing Hall of Fame & Museum, which features the Shrine to Anglers, a half city block long and four and a half story tall leaping muskellunge.)  On a fishing trip many years ago with his dad to Wolf Lake, Tomes caught his first keeper on a Mepps Musky Killer.  “That night at the lodge, they brought out a cake in the shape of a muskie to commemorate my good luck,” Tomes continued.  “An old-timer came over and clapped me on the shoulder and said, ‘Son, I’ve been muskie fishing my whole life, I’ve never caught a keeper.’  I knew then that muskies would be part of my life.”

About the time that he caught his first muskie, Tomes was fostering a passion for fly fishing.  “I soon made the connection that if you could catch tarpon or trout on a fly, you could probably catch a muskie,” he continued.  The first time I ever went muskie fishing with my fly rod, I got a small but legally-sized fish.  The visual take, the fight, the aura of having caught this elusive and unpredictable predator on a fly – all of this had a powerful appeal.”

Alternately described as freshwater barracuda, lake-dwelling tigers or the fish of ten thousand casts, muskie are the largest members of the pike family.  They reside at the top of the food chain in the lakes and rivers they call home, and are built for mayhem – long and lithe for quick bursts of speed, with large jaws outfitted with extra-sharp teeth; in the old days, anglers used to shoot muskies before bringing them in the boat!   Fish average 30” to 40” (10 to 20 pounds), though 50” “trophy” fish (often eclipsing 40 pounds) are encountered each year.  Muskies are catholic eaters —in addition to baitfish, they’ve been known to eat other gamefish, waterfowl and small mammals.

Given the muskellunge’s size and predilection for larger pieces of protein, conventional gear anglers have often relied on lures that might dwarf the brook trout found in some New England streams.  It should be no surprise, then, that the sight of a ribbon of fly line unfolding over a likely muskie lie was met with arched eyebrows if not sniggering laughter by die-hard muskellunge anglers.  “My first impression of fly fishing was that small flies equal small fish,” said Larry Ramsell, Legendary Angler in the National Freshwater Fishing Hall of Fame & Museum and two-term Past International President of MUSKIES, INC.  “It also looked like a lot of work.  But anglers like Robert have come up with flies and techniques that are more than sufficient for what muskies are looking for, and they can fish shallow, weed-infested areas that guys fishing with large lures just can’t get to.”

Testimony to the possibilities of fly fishing for the state fish of Wisconsin, and its growing acceptance:  at the 16th Annual Chicago Muskie Show, the world’s largest exhibition for muskellunge devotees, Robert Tomes was a keynote speaker and addressed a roomful of old guard muskie anglers.  “Five years ago, there would have been six guys in the room,” Ramsell added.

Fly fishing for muskellunge has its advantages, yet  it’s not a relaxing exercise.  First, it usually means blind-casting a heavy 9- or 10-weight rod from dawn to dusk, throwing large streamers and poppers, some that would seem better-suited to blue water billfishing.  You’ll have to learn about the places muskies like to lay in wait to ambush prey – weedbeds, drop-offs, fallen timber.  If you’re fortunate enough to entice a fish to take your fly, you’ll need to resist the temptation to lift the rod and use a strip set instead.

Most important of all, you need the proper mental preparation.

“You need to maintain a cautious optimism that a fish is going to present itself, even though you’ve been casting for eight hours and haven’t seen a thing,” Tomes advised.  “You have to imagine that it’s going to happen, have a positive visualization of you hooking, fighting and landing –and of course, releasing a muskie.  These are moody creatures and seem to know – and strike – the moment you drop your guard.  Not everyone can handle that.”

Whether one connects with a muskie or not, an expedition to the lakes of northern Wisconsin promises a connection with the aura of the Northwoods.  Here,  the whoosh of an unfurling forward cast is occasionally drowned out by the call of a loon, and calming vistas of majestic pine and birch forests are occasionally disturbed by the sudden appearance of a submarine-like apparition following your fly.

(A version of this story originally appeared in the New York Times.)