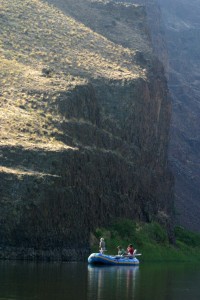 Casting for smallmouth against the immense canyon walls that typify the middle section of Oregon's John Day River.

I sense that the ten year old boy in the raft before me would rather be Internet-gaming.  The awesome basalt cliffs enclosing the John Day River make little impression on him as he casts his popping bug under the watchful eye of his dad, who seems intent on building a fly fishing legacy.  Suddenly the water explodes around the boy’s fly, and he’s fast to a scrappy smallmouth bass.  For the moment Sim City is forgotten, and a smile spreads across his face…and the face of his father.

If the fear of impossibly long casts, improbably small flies and unimaginably finicky trout has prevented you from fly fishing, smallmouth might change your mind.  Bass are voracious feeders and ever eager to strike a fly; many times they will award even a poorly placed cast with a spirited surface splash.  These strikes provide a visceral thrill, no matter how many fish you’ve hooked.  While most fish are around 12”, lunkers to 20” are landed each year.

Central Oregon’s John Day River is an unlikely smallmouth sanctuary.  The river has long hosted prolific steelhead runs; in 1971, 75 bass were surreptitiously introduced to the river, and they prospered.  Today, the John Day is considered one of the best bronzeback fisheries in the west.  Large numbers of fish make for good catching — even beginning anglers can realistically expect to land up to50 bass in a day.  One hundred fish days are not uncommon for seasoned anglers.  Most fishing is done from a raft; the river fishes well from mid-spring through early fall, when steelhead join the fray. 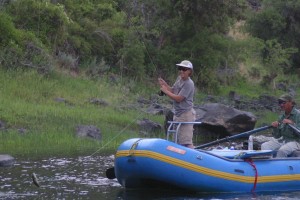 The JD's smallmouth are very willing -- fifty fish days are more the rule than the exception.

The isolated canyons of the John Day provide a majestic backdrop for a bassing adventure.  Floating past imposing rock formations and abandoned homesteads, you may spot bighorn sheep, pronghorn antelope or mule deer on the cliffs.  You won’t see many other rafters.  There are several spots along the 4-day float ($1,200 per person) where you view petroglyphs, reminders of the Native American peoples who once inhabited the canyon.

While the aboriginals worked hard scratching a living from the canyons, guests of Little Creek Outfitters live like royalty.  Comfy tent camps and sumptuous Dutch Oven creations await our group at the end of each day’s float.  As the sun dips beyond the canyon rim, we sample one of Little Creek’s killer mojitos, and toast the ones that didn’t get away.