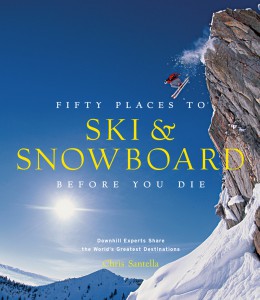 “A few years ago, I met some Russians on a ski trip in the Ukraine,” professional skier Thibaud Duchosal recalled, “and they said, ‘You have to come to Russia to ski.’  I like seeing new places, so I went.  On my first trip, I went to Mount Elbrus, which is the tallest mountain in the Caucasus [at 18,510 feet].  It’s a huge mountain, very wild and amazing for skiing.  However, the people there were very unfriendly, and I didn’t feel especially safe in the streets.  Some people I met there said I should try Krasnaya Polyana.  I came the next year on the Freeride World Tour.  There wasn’t much of a skiing infrastructure.  There were only a couple resorts, and not a huge amount of vertical relative to some places – maybe 1,500 meters.  But that first visit, it snowed almost ten feet over ten days – light, dry powder.  It was a paradise.  When you visit a place and get such conditions, you have to go back.  I’ve returned to Krasnaya Polyana a number of times since, both to compete and to guide clients.”

Krasnaya Polyana may not roll off the tongue quite so readily as Aspen or St. Anton when your friends are rattling off marquee ski areas, but that may change soon.  The resorts here – primarily Rosa Khutor – will host the alpine skiing events in the 2014 Sochi Winter Olympics.  Krasnaya Polyana sits in the western Caucasus Mountains in the far southwestern corner of the Russian Federation, 50 miles east of the Black Sea resort town of Sochi and just north of the border with the former Soviet satellite nation Georgia.  The Caucasus stretch from the Black Sea to the Caspian Sea, and comprise one of the physical – and certainly psychological – borders between Europe and Asia.  (The Caucasus region includes southwestern Russia, Georgia, Azerbaijan, Armenia and parts of Turkey and Iran.)  A number of peaks in the range eclipse 16,000 feet, though the summits around Krasnaya Polyana are in the 6,000 to 9,000 foot range.  “At Rosa Khutor, the experience is not about super big mountains,” Thibaud continued.  It’s really about the snow.  The bad weather rolls in incredibly fast from the Black Sea, and the quality and quantity of the snow is amazing.  Every time I’ve gone, there’s been a minimum of 5 feet of fresh snow over the course of my visit; one week, there was 13 feet of snow.

“In my opinion, the best terrain at Rosa Khutor is in the trees.  The forest area is steep and fairly open, and it really gathers snow.  The tricky thing is that the rules for going off-piste are somewhat arbitrary.  In Europe, if you want to go off-piste, you go at your own risk.  In Russia, there are no ropes, but access to off-piste areas is closely controlled.  There will be times when the conditions are great and the weather is clear, but they won’t let you go.  Other times when the conditions are dangerous, they open up the off-piste areas.  I’ve tried to understand their thinking, but I can’t.  At the end of the day, you ski wherever they want you to ski.”

The rather autocratic dictates that determine ski policy around greater Krasnaya Polyana are also largely responsible for the significant development that’s underway in the region, the development that may put the town on the international ski destination map.  It turns out that President-then Prime Minister-and-now-again-President Vladimir Putin is a passionate skier, and that Krasnaya Polyana is one of his favorite resorts.  This – and the fact that President Putin recognizes the great public relations potential of a successful Olympic event and has the power to allocate resources to help assure such an outcome – will no doubt transform the region.  “On my first visit in 2008, there were just a few chairlifts,” Thibaud added.  “The plan is to have something like 50 chairlifts and much more of the upper mountain served.”  Four new resorts are under construction in Krasnaya Polyana, all scheduled to be completed before the Games begin.  Whether Putin and his counterparts can pull off a Caucasus version of France’s Trois Vallees is still to be seen, though Krasnaya Polyana will surely change.  Whether the additional terrain will provide enough deep Black Sea powder for the additional crowds is anyone’s guess.

One word of caution – you’ll do well to consult your best diplomatic contacts before scheduling a trip to Krasnaya Polyana.  If President Putin – who has an estate near the mountain – is present and entertaining guests, the resort may be unceremoniously shut down.  Heli-ski guests in the region will be similarly disappointed, as a 50 kilometer no-fly zone is enforced during presidential visits.

An aspect of the Krasnaya Polyana experience that will likely improve with expansion is the cuisine.  “On my earlier visits, the food was typical Russian fare—not very interesting,” Thibaud continued.  “With the new resorts, they are adding restaurants that feature some European cuisine.  Though the food may be better in other places, the people are very warm, and fond of Europeans and Americans.  There’s definitely a language barrier; no English is spoken.  But you can still communicate with your hands and have fun.  I don’t have the sense that the local people drink a lot of vodka every day, but when they see foreign visitors, it’s almost as if they play to the Russian stereotype of the heavy drinker.  Just don’t try to drink vodka with them, or the end of your night will be terrible.

“I have good memories from each time I’ve visited Krasnaya Polyana, and all the memories concern the vast amounts of snow.  On my first visit, it skied 20 inches the night we arrived, and it was still snowing the next morning.  My group was thrilled, but some of the Russians we met were unhappy.  ‘It’s a bad day,’ they complained.  ‘It’s snowing.’  For the next few days, there was no fresh snow.  The next evening, it started snowing again, huge flakes the size of pizzas!  ‘Tomorrow, we’re going to have 50 new centimeters,’ we said to each other.  When we woke up, there was five feet of new snow.  All the forest areas were open.  It was snowing so hard that even though 20 people had skied down one of the trails below the lifts as we went up, by the time we were going up again, their tracks were covered.”

Thibaud Duchosal was raised in Les Arcs, France.  Like all kids in the valley, he started skiing slalom and racing very young, and as an adolescent, turned to freeride and exploring the exceptional terrain that was his backyard. As did his mentors, Enak Gavaggio and the Troubat brothers, Thibaud turned his passion into his profession. Beginning with photo shoots in Scotland and Uzbekistan, he discovered travel and a love of other cultures. He joined film production companies Invert Prod and Garchois Films, and the freeride competitive circuit.  2009 was his best year thus far, as he finished 6th overall in the World Freeride Tour.  Look for Thibaud in Argentina, Russia, US and France, or portfolio pages in ski magazines and a new series of videos, Eye of the Storm.  Learn more about his adventures at www.thibaud-duchosal.com.

Getting There:  Krasnaya Polyana is roughly 50 miles east of the Black Sea resort town of Sochi, which is served from Moscow by Aeroflot (888-686-4949; www.aeroflot.ru).

Season:  The snow is best from January through mid-March.

Lift Tickets:  A day pass at Rosa Khutor is 1,400 Rubels (approx. 35 Euros).  Packages assembled by Big Mountain Trips (888-875-3662; www.bigmountain-trips.com) include flights from Europe to Moscow and Sochi, lodging at 3-star hotels, guides, ski passes and several days of sightseeing in Moscow, and begin at 2,790 Euros.

Level of Difficulty:  There’s a variety of terrain at the resorts in Krasnaya Polyana; as of this writing, terrain at Rosa Khutor is classified as 59% beginner, 6% intermediate and 35% advanced.

Accommodations:  If you choose to go it alone, one acceptable option is the Park Inn (parkinn.com/hotel-rosakhutor) at the Rosa Khutor resort.

(From Fifty Places To Ski & Snowboard Before You Die)