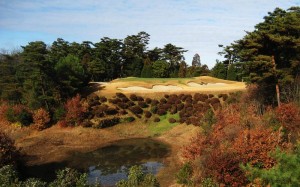 The fifth at Hirono, with its large, deep bunkers -- dubbed "Alisons" in honor of their creator.

“When serious golfers begin a quest to experience the great courses of the world, their initial travels naturally take them to the United Kingdom and Ireland,” Ben Cowan-Dewar began.  “Once this appreciation is sated, golfers tend to look further afield in their explorations.  My own journey took me to Japan.  While North Americans may sometimes think of Japanese golfers visiting the United States to play, we don’t often consider Japan as a golf destination – though there are in fact a number of world class venues there.  On my trip, I played the Tokyo Golf Club, Kasumigaseki Course in Kanto, the very underrated Naruo near Osaka and the Fuji Course in Kawana, oft referred to as ‘the Pebble Beach of Japan.’   My itinerary was leading to Hirono, which friends who had played it described as a masterpiece.  Whenever a course is billed as truly elite, it can be pretty hard to meet expectations.  However, Hirono did.”

Golf came to Japan courtesy of an English tea merchant named Arthur Groom, who cleared enough land near his vacation home on Mount Rokko (near Kobe) to route a few holes at the turn of the last century.  There was an 18-hole course on the site by 1904, which was quite popular with the  British ex-pats (native Japanese citizens were excluded).  At the same time, Japanese men who had worked or attended school abroad returned to their homeland with a passion for the game, and began campaigning for courses of their own.  The first courses were primitive by overseas standards, and as more courses became available, golfers began calling for more inspired tracks.  This demand helped deliver Charles Alison to the Land of the Rising Sun, and it would not be an overstatement to say that his three months there changed the direction of Japanese golf – though oddly enough, it was Harry Colt, not Alison, who was originally summoned.  (Colt accepted the assignment for a then princely sum of £1500, but balked at the long trip and sent Alison in his stead.)

Being a partner of Harry Colt and Alister Mackenzie couldn’t help but place Charles Alison somewhat in the shadows, though he was a great architect in his own right.  Colt made Alison his man on the ground in America during the 1920s, where Alison produced such notables as Burning Tree (in Bethesda, Maryland), Country Club of Detroit, Sea Island (Georgia), Kirtland Country Club,  Milwaukee Country Club and Timber Point (on Long Island).  Born and educated in England and working considerably in the United States, Alison had great exposure to much of the great architecture, past and present.  In a detailed profile of Alison on GolfClubAtlas.com, Thomas MacWood notes that:

“Alison likely had seen more examples of great work than just about every other architect before or after him. He was able to watch Park, Colt and Fowler first hand transform the Heathlands into excellent golf. He was also able to watch contemporaries such as Ross, Tillinghast and Thompson produce some of their best and most influential works.”

All these influences came to bear on Alison’s brief sojourn in Japan, where he produced the original Tokyo Golf Club (which has since moved to literally the neighbouring property at Kasumi), Kasumigaseki, the Fuji Course at Kawana, Hirono, Ibaraki-Old and his ultimate achievement, Hirono.

Hirono has been called the Augusta National of Japan; this moniker speaks to both its exclusivity and its quality.  (“The story is that there are many CEOs in Tokyo waiting for their invitation to play here,” Ben quipped.)  The parkland layout wanders through pine-covered hills and valleys, across gulleys and ravines; the prominent characteristics of Alison’s design ethos are all evident at Hirono—large, deep bunkers, sideways-tilting greens and prominent use of water hazards.  (Alison, it’s interesting to note, had an ambivalent relationship with water.  He felt that it could often be a bad feature, since shots could not be played from a pond or stream, yet he frequently used water hazards.  His notes show that he was sensitive to the significance of water in Japanese culture, and his employers’ love of ponds and lakes – though he feared that “their love of water-hazards, were it not for their self-control, might develop dangerously.”)   The little par-3 fifth hole at Hirono unites all facets of Alison’s design.  “The fifth is one of the world’s great short par-3s,” Ben continued.  “It’s not more than 150 yards and plays across a gully with water.  Most of front is guarded by bunkers – in Japan, they call these deep bunkers ‘Alisons’ in homage to their creator– and the green angles sharply to the left.  The course really gets its legs here. Hirono’s only detractions come from the stylistic changes to Alison’s original design, which has taken the original rugged bunkering and softened it. The original photos of five are among the most visually arresting of any inland course with which I am familiar.”

Other stunning one-shotters include holes seven and thirteen  (the latter plays across a pond with a bridge, which brings to mind the 12th at Augusta).  Two of Hirono’s most revered holes come a bit later, at fourteen and fifteen.  “Hirono is a great driving course, and this is evident at the par-4 14th,” Ben continued.  “You play across the water to an uphill dogleg left.  The fairway also slopes significantly to the left.  If you play to the right, you’re left with a long approach to the green.  If you play too far to the left, you risk running off the fairway.  I think Alison came up with a very inventive way to incorporate the slope into the hole.  Number 15 is a 550-yard par 5 that requires you to play across two gulleys, which create two distinct landing areas.  There’s a pine tree in the fairway on the fifteenth that can be reached with only a very solid drive; it’s very beloved by the membership, and has become the signature of course.

Course experience aside, Ben noted the differences between golf in Japan and the U.S.  “The game is quite similar throughout the world – with the possible exception of the pace of play.  The entire event in Japan is quite different.   Upon playing nine holes you retire for lunch.  This is not a snack at the halfway house, but a proper lunch in the clubhouse – soba noodles, sushi, some sandwiches, and a few drinks perhaps.  After an hour, play on the back nine resumes.  It’s a wonderful part of the experience to sit down mid-round and get to know your hosts.  The foreign nature of the experience continues after the round, with the bath ritual.  I remember seeing a picture of some Japanese men sitting on upside down buckets hand bathing in photographer Brian Morgan’s book of courses of the world.  For some reason, I thought that was the bath.  It’s actually a prequel to the bath.  At Hirono, the bath is a dead-calm pool of scaldingly hot water that looks out on a beautiful garden.  As a North American guest, I felt obliged to stay in longer than my host…even as heat stroke set in!”

Ben Cowan-Dewar founded GolfTI in 1999, when his passion for the game fuelled him to leave the finance world. While establishing GolfTI, Ben kept his feet on the ground by managing a golf marketing consulting business, and worked for clients in 20 countries. Finally he was able to focus exclusively on what he loved most, and has since planned and lead GolfTI trips to destinations as diverse as Australia, Indonesia, France and Dubai. Scouting the world’s best courses has taken Ben across five continents.   Ben sits on the GOLF Magazine panel that is the authoritative rating of the world’s finest courses.  He is a partner of the acclaimed golf architecture website GolfClubAtlas.com and is currently building a seaside course in Eastern Canada, Cabot Links.  Having traveled to more than 30 countries over the last 10 years, Ben’s preference is to be at home in Inverness with his wife and son.

Course Information:  Hirono (+81 794 85 0123) plays 6,925 yards from the back tees.  Hirono is extremely private, but players from abroad can occasionally gain access by traveling as part of an organized golf tour.  Luxury golf tours that include play at Hirono are available from several companies, including Golf TI (866.866.9295; www.golfti.com).

Accommodations: The Official Kobe Tourism Site (www.feel-kobe.jp) highlights accommodations around the region.  You can research lodging options in the nearby larger city of Osaka by visiting the Osaka Visitor’s Guide (www.osaka-info.jp).