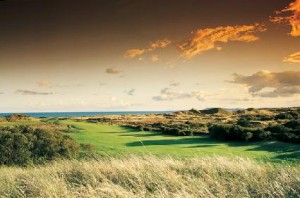 The 470-yard par-4 seventh hole at the European Club has garnered much attention for its thoughtful use of visual devices to both entice and strike fear into the player.

The European Club, thirty-five miles south of Dublin, is a vibrant tribute to the twin passions that have ruled Pat Ruddy’s life:  cultivating an understanding of what makes a good golf course and finding the wherewithal to put that understanding into practice with one’s own hands.  “My ‘training’ as a golf architect started at the same time as my ‘training’ as a golf writer,” Pat recalled.  “It was in a small west of Ireland town where my father was one of the foremost golf enthusiasts and where the local golf club was so ill-funded that it had to move location three times while I was a boy.  Three times I found myself helping Dad and his pals load all the club’s paraphernalia into the back of a few trucks and move to the newly rented lands¾a few hand-pushed lawnmowers, some scythes, rakes and shovels, flagpoles and bunting, hole cups and fencing posts, and barbed wire to fence the greens in order to keep sheep and cattle off!

“It would take a few weeks of volunteer mowing and scraping to create our new golf course—nine holes, no bunkers—and to be at play once more.  So one learned the essence of the game—a field, grass low enough to play ball, and someone to play with or against.  All other golf is merely an extension or ‘improvement’ on this template.  All but a few Irish golf courses in the 1950s were rudimentary, and one was immersed in the idea of building or creating a golf course through work rather than through high finance.”

After a celebrated career as a golf writer and a few smaller-scale but successful efforts as a designer, Pat began to set his sites on the Big Project, one that had been gestating since boyhood.  “My dream of a golf course of my own arose from images in a book by Henry Cotton in which he reported that Jimmy Demaret and Jack Burke were building a great course of their own in Texas and calling it Champions.  To think of it¾a fellow could own his own golf course!  It took all of thirty years, with one failed attempt in between, to finally get my own golf course, but it was always going to happen as I was driven by the thought.  Of course, I hadn’t plans for a great big place. Just a golf course where I could hit millions of shots in peace and come out and attack Trevino and company on tour.  Alas, the course proved bigger and the golf less intense.”

There was little question that the course Pat would create for himself would be a links, and he surveyed the Irish coast by helicopter to identify the appropriate site.  After years of searching, the land south of Dublin was found in 1986.  Recalling the bravado of Demaret and Burke, he sought a big name for the project and landed on the European Club.  “One of my great challenges has been to see if one could live up to the grandeur of such a name during one’s lifetime,” Pat said.  “In this approach, I have been encouraged by the thought that the R and A has been in St. Andrews for hundreds of years and still doesn’t own a golf course, while the town of St. Andrews had owned a golf links for hundreds of years before finally adding a clubhouse about a decade ago.  Compared to them I am really flying at the speed of light!”

Does the European Club live up to the grandeur of its name?  Most visitors would say, “Yes.”  The site, which adjoins Arklow Bay and provides vistas out to the confluence of St. George’s Channel and the Irish Sea beyond, may be one of the last true links sites to be developed in Ireland.  The large dunes and the hard, undulating turf that are trademarks of links land are surely here.  But to appreciate what the European Club is all about, players should do their best to eschew the views and more obvious links icons and focus on the minutiae of the design:  the placement of a strategic pot bunker, the swale before a green that sends a subtle signal to the knowing player of where to roll his approach.  It’s not showy, but stately.  “We are in an age of copyists and an age when anything that is rumpled near the sea¾or, failing that, a lake¾causes storms of excitement amongst the observers of modern architecture,” Pat bemoaned.  “They seem to be very confused by scenery at the cost of golf.  I try to look at the land and become absorbed by it and to drench it with my dreams of the best golf shots I can play, and the golf shots I cannot play, and the golf shots that will be played in future generations which we cannot yet fully comprehend.  What would old Tom Morris have thought of the lob wedge!”

The 470-yard par 4 seventh hole at the European Club has garnered much attention for its thoughtful use of visual devices to both entice and strike fear into the player attempting to advance the ball toward a green that’s backed by Brittas Bay.  “The fact that one can stand on this fairway and see nothing man-made on a rotation of three hundred and sixty degrees is a great and a rare experience nowadays,” Pat said.  “It’s a good place for a picnic and a relaxed sit-down with a book at one of the many times that we do not have golfers about!”  Holes 12 and 13 are also favorites, as they play right along the beach.  Indeed, if one goes astray onto the beach on these holes, the ball is still technically in play.  It was at the par 4 430-yard twelfth that one could once encounter a rare Irish sea creature, as Pat described.  “We had one villainous member¾now dead, alas¾who had the habit of taking a break from the golf and going skinny-dipping in the sea at hole twelve.  One day, he emerged from the waves to be greeted by a bemused American looking for his golf ball amid the shale and sand.  ‘Can’t find mine anywhere, either,’ chirped my friend donning his clothes and lifting his clubs to continue his round.”

Less than two decades from its inception, the European Club is already comparing quite favorably with the venerable courses that Pat Ruddy once wrote about, finding its way onto many “top 100” lists.  With the recent completion of the links at Rosapenna and Druids Heath, Pat will now focus his energies exclusively on his course—to, in his words, “ensure that this links is the most carefully devised to combat the elements of golf for at least fifty years to come.”  Accolades aside, Pat has already had a wonderful time of it.  “Who wouldn’t love to see Tiger Woods play a course that they had designed?  And Johnny Miller¾who gave me his shoes¾and Ian Baker-Finch and so many others?  The one big regret I have is that my dad didn’t live to see it.  Though the excitement would likely have killed him!”

Pat Ruddy is a man of golf—a golf writer, golf promoter, course architect, and course owner. The links of the European Club, which he designed and owns, was rated ninety-eighth best course in the world by Golf magazine in 2003, and it is included in Britain and Ireland’s top 100 by the leading local polls alongside his other designs at Druids Glen, Ballyliffin, and Donegal.   His other internationally recognized designs include Portsalon, St. Margaret’s, and Montreal Island (Canada).

Getting There:  The European Club is less than an hour’s south of Dublin, which is served by Aer Lingus (800-474 7424; www.aerlingus.com), among other airlines.

Course Information:  The course is open to visitors throughout the year, with the exception of Christmas week.  Green fees are 180 euro from April through October, 100 euro November through March.  For more information and tee times, call +353 404 47415 or visit www.theeuropeanclub.com.

Accommodations: A broad range of lodging can be found in Dublin, from guesthouses to five-star hotels.  The Dublin Tourism Web site (www.visitdublin.com) is one good starting point for your research; so is Dublin City Centre Hotels (800-869-4330; www.dublin.city-centre-hotels.com).  While in Dublin, lovers of good beer will appreciate a visit to the House of Guinness (www.guinnessstorehouse.com).  Lovers of literature may wish to pay homage to James Joyce at the James Joyce Centre (www.jamesjoyce.ie).